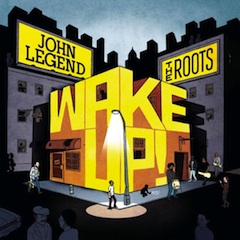 John Legend and The Roots

“Wake Up!” was one of my favorite buys of 2011. A pal recommended “I Can’t Write Left-Handed” to me and after I gave this version of it a listen, I had to slap myself twice. First, because the album had been out for a year and I’d never heard of it, and then because the song itself was first released back in 1972 and I’d spent all 39 of those years not listening to the original version, either.

Granted, I had other priorities in the early Seventies (I was kind of a child-development geek back then…totally obsessed with it, you could say) but the free pass ends in the Eighties.

“I Can’t Write Left-Handed” is an anti-war song in which a Vietnam vet dictates a simple letter that he can’t write himself because of his battlefield injury. That’s it. But it gets right to the point: that the human cost of war is enormous, and that the perspectives of someone who’s actually seen combat are very, very different from those of someone who hasn’t. Even those of a soldier who hasn’t been to war yet.

Here’s what separates a good anti-war song from a poor one. The focus is on the people who have been directly affected. It’s not on the singer, and how angry and offended he, personally is. For some reason I’m suddenly thinking of the moment when Starr Jones made that bold career choice to switch from Tolerable to Insufferable Twit. The 2004 Indian Ocean tsunami killed more than 150,000 people. Starr’s method of relating to the disaster was the fact that she’d honeymooned in that area a month before the disaster, and had felt like she’d been blessed by God.

Take it away, Jon Stewart:

It’s kind of a cautionary tale. Selfishness is self-limiting at best and self-destructive at worst. It’s such a potent toxin because it’s so easy not to see it in your own behavior. Was Jones trying to deliberately swing the spotlight towards her and off of the dead, injured, displaced, and bereaved? Or was she simply trying to find a way to connect to a disaster that happened halfway across the world, and which did so much damage that the numbers almost defy comprehension?

The lesson is that it’s usually not important that you work out your own feelings about these things. That’s a luxury, at a time when so many are in such dire circumstances. The Vietnam War produced protest songs by the psychedelic busload. How many of them were particularly thoughtful? How many were just selfishly angry?

I wasn’t around back then so I don’t have either that experience nor the full context. I really can’t judge. I’m happy that in our current environment, despite the fact that we need tactile and repeated reminders of just how many of our citizen soldiers are out there risking everything, there seems to be a reliable partition between our feelings (pro and con) about the use of American military forces, and our feelings for those out there on the line.

This particular track is a new cover recorded by John Legend and The Roots. The 1972 original had Bill Withers describing an experience he had with a recently-returned vet, and the story that the encounter inspired. This version has John Legend describing the song in which Bill Withers told the story that inspired the song. It’s a little bit recursive but hey, it works.

The shift in context between the two versions is interesting. It’s a potent song so long as anybody is fighting anywhere in uniform. But the original was written during the days of the Draft. Today, we have an all-volunteer army. I suspect that means something, and it nags me that I can’t figure out what that is.

There are categories of vocations where the common thread is “service.” The military, law enforcement, firefighting, teaching, certain articulations of the ministry, community organizing, even politics: on some level, they’re impossible, undoable jobs in which everyone who signs up pretty much knows that they’ll be paid far less than the benefits that they create for Society.

And yet, there are people who go out and do those jobs. Yes, of course: not always for altruistic reasons. But even if you became a firefighter because of the great pension program, or you became a soldier in part because the Army was hiring and everybody else in the state wasn’t, that doesn’t change the basic fact. There are people who run out of a burning building to save themselves and then there are the people who run in to save the lives of strangers. If you watched that orientation video and you still signed the contract, you’re not getting paid enough.

I read an essay by a decorated soldier who tried to explain the disconnect in perceptions between soldiers and non-soldiers. In explaining his actions and even his mere presence in a war zone, he just said “It’s the job I signed up for.” That’s the key. I know I’ll never understand it fully but I know the truth is right there. It seems remarkable to anybody else that taking those kinds of risks and making those kind of sacrifices could be simply part of a job description.

Back to the original question: how does this song change when the vet in the song fought in the Middle East instead of Southeast Asia? When the soldier made a choice and volunteered, versus (in effect) being hit by a big truck as an act of God and had no choice in the matter?

And of course, it’s a stupid, selfish question. He’s can’t write left-handed any more and he doesn’t think he’ll be around much longer. Why the compulsion to pull one’s thoughts away from that for one moment?

Okay, let’s get back to cheerier topics: music. I own both the Legend/Roots album and the version of the song recorded by Bill Withers, recorded live at a Carnegie Hall concert. I gravitate towards the newer edition. It has more momentum; there’s something about the additional repetition of the song that builds to a kind of prayer, and the more conventional R&B/soul arrangement suits the song better than the more intimate 1972 performance. But Your Taste May Vary.

Try or buy “I Can’t Write Left-Handed” on the Amazon MP3 Store. Anything you buy on Amazon after clicking that link results in my receiving a small kickback in the form of Amazon credits…which I promise to spend on fun things.