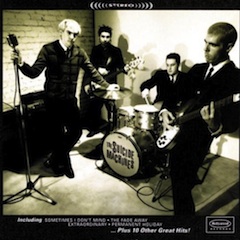 I Never Promised You A Rose Garden

Yesterday, I wrote about a horrifically sappy 70’s love song that I enjoy because it’s just so treacly and tasteless and awful and omigod I am, like, so much BETTER than whoever wrote it!

Today, it’s a horrifically sappy 70’s love song that I enjoy because it’s a legitimately fantastic track. And it’s a fantastic track because a different band put a whole new twist on it.

Remember the movie “That Thing You Do”? A replacement drummer singlehandedly sends a local Pennsylvania band straight to the Billboard Top Ten by spontaneously kicking up the tempo of the lead singer’s mushy ballad and instantly creating a song of almost weapons-grade danceability. That’s what Suicide Machines did to “I Never Promised You A Rose Garden.” It’s a fast, pumpy track that’ll make you jump up and down a lot. The original song was intended to be sung by an overly blow-dried blonde woman wearing a thick dress, walking through a TV stage filled with fake flowers. In soft-focus.

Here’s Lynn Anderson singing it on TV in 1973, before the blow-comb was invented. But I think you get the gist:

The two recordings couldn’t possibly be more different in tone. And yet — here’s something I didn’t truly grasp until hearing the original just now — it’s truly the same song. I was going to praise the rocksteady bassline of the Suicide Machines version as a terrific innovation but nope: there it is in the 1973 edition, being played by a session musician who was probably thinking about the best way to install a wire shelving unit he just bought for the upstairs bathroom the whole time he was playing.

“Take a lame easy-listening hit and record it faster and louder” is a common way to fill a gap or two in an album. These things rarely satisfy, though. It just comes through as sarcasm. But sometimes, the right band brings the right approach to the right song, and reinvents the source material. Look at the lyrics:

I could sing you a tune or promise you the moon,
But if that’s what it takes to hold you,
I’d just as soon let you go, but there’s one thing I want you to know.
You better look before you leap, still waters run deep,
And there won’t always be someone there to pull you out,
And you know what I’m talkin’ about.
So smile for a while and let’s be jolly:
Love shouldn’t be so melancholy.
Come along and share the good times while we can.

It turns out that there was always a harder edge hiding in that song, waiting to come out. Essentially, the singer is telling his or her partner to grow a pair and have a grownup relationship.

One imagines that the couple’s argument began when the singer’s partner said “You stole my iPad and traded it for all that pot you and your friends smoked last weekend, didn’t you?” But you have to admit, a musical response of this calibre just might convince the offended party to stick with the relationship for another couple of weeks. Or until he or she discovers that their good wristwatch has gone missing, too.

Listen to “I Never Promised You A Rose Garden” on the Amazon MP3 store.

As usual, any Amazon purchases you make after clicking that link will result in my getting a small kickback, which I shall gratefully spend on silly things.

[UPDATE: I’ve just found out that Amazon is giving everybody $3 in free MP3 downloads. Use this link to claim the code and apply it to your account. You’ll have until Monday night to use your credits.]