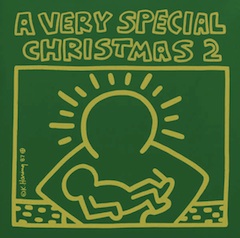 Santa Claus Is Coming to Town

It’s certainly appropriate to have some actual Holiday Music in the mix this weekend. 90% of you are spending part of this time either shopping for gifts, or decorating the house, or writing out cards. Or perhaps you’re preparing a blistering post for your Facebook page about how incredibly childish it is to believe that a magical bearded man whom nobody ever sees is covering the entire world giving people the things that they ask for.

(A warning to everyone in that last group: we could see the “But I’m not talking about Santa Claus: I’m talking about…GOD!!!” payoff coming. Keep at it; the whole point of a first draft is to get you to that second draft.)

The first half of the holiday season is usually more bouncy and upbeat than the second half. This is the ho-ho-ho giddyup-jingle-horse section of the proceedings. The music should be big, and cheery, and so jolly that you can even see the humor in a set of novelty Christmas underpants with some naughty wordplay silkscreened across the front.

Yes: this is when Frank Sinatra and a 24-piece orchestra get up off the bench and put on their helmets.

To my way of thinking, there are only two ways to hear “Santa Claus Is Coming To Town”: either it’s performed by a cafegymatoriam stage full of middle-schoolers, or it’s sung by Frank Sinatra. I imagine a musical version of “Chopped.” Your basket only contains one ingredient: this harmless and bland holiday tune. You have thirty minutes to turn it into something exciting and time starts…now!

Some singers serve this bowl of oatmeal as-is. Here you have your Pat Boones, your Andy Williamses, and others who were once on TV every year with a top-rated Christmas special but who are now on the Hallmark Channel four times an hour trying to scam senior citizens into taking out reverse-mortgages on their homes. Others, like Springsteen, lose their confidence and dump in malt vinegar and habanero peppers to spice it up. It’s an interesting recording, but you can no longer taste the original ingredient…so does that even count?

Sinatra wins this contest easily. Practically everything you need to know about Sinatra’s mastery is in this track. How did he manage to make “Santa Claus Is Coming To Town” actually swing?

(With a lit cigarette in one hand and a tumbler of scotch in the other, I imagine.)

I prefer the “Very Special Christmas” version to the original. It’s tough to improve a Sinatra track but yup, Cyndi Lauper one of those people who can pull that off. Year after year, she validates the faith that I placed in this spunky, colorful pop artist back when I was in high school. Hit singles fade from consciousness and cultural phenomenons come and go. Only talent endures. This is why, two decades after their first hits, Madonna is opening a new chain of fitness centers and Cyndi Lauper is still recording remarkable performances.

And good gravy, she can actually keep up with Sinatra.

Frank’s career ground down to a somewhat undignified end, like a magnificent 1952 Cadillac that kept rolling long after it was only being held together by duct tape and primer. His final recordings were duets with a sometimes highly-improbable range of performers who looked and sounded as though they’d won some sort of radio contest instead of earning their way into the studio. Not the case with Lauper.

I had long assumed that this track had been recorded like all of Sintra’s late-career duets: Sinatra’s singing partner steps into a booth in a mall somewhere, deposits eight quarters into the slot, selects an available track that Frank pre-recorded months ago, presses a green button, and does his or her best.

Now, though, I suspect that the producers used vintage master tapes. Compared to his other 1990’s recordings, Sinatra is much more “present” here. And he’s in much stronger voice.

Also: oh, for God’s sake…if Sinatra were an active participant in this track, would he have agreed to second billing behind some broad with orange hair?

Listen to “Santa Claus Is Coming To Town” on the Amazon MP3 Store.

This link is tagged with my Amazon Associates ID. Everything you buy during that Amazon session will result in a small kickback in the form of Amazon gift credits. I solemnly vow to blow those credits on fun things.