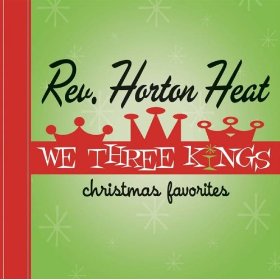 My BFF John has really screwed himself. Truly.

At one point or another, many of us have spontaneously decided to put together a Christmas mix tape and make a dozen copies and send them out to our friends. Maybe we even did it again a year or two later. But pretty much it’s a one-and-done proposition.

John does it annually. Which was a big enough blunder, but then he compounded it by turning out nothing but awesome compilations. Year after year, every track is pure Tabasco. So much so that sometime in November I start sleeping out by the mailbox until I’m rewarded with the delivery of a padded mailer from New York.

So you see John’s problem: he’s been at this for well over fifteen years now and at this point, the only excuse that his friends and family will accept for not coming through with these two dozen tracks is The Sweet, Cold Kiss Of The Grave.

(Even so: is that really an excuse, John? Would it be that hard to make up a few of these collections for post-mortem release, just to give us all ample time to line up a new supplier? We’re really sorry about the speeding bicycle courier knocking you into that open manhole while a crowd of laughing and jeering onlookers did nothing to aid you while you floundered and drowned in sewage — I’m guessing; but you work in New York City, so it’s not all that unlikely. All the same I’m sure that you would want us to move on with our lives at some point.)

This year’s anthology (“ALTER-NATIVITY IV”) is up to his usual high standard and contains 25 tracks of awesome.

I could save myself a lot of trouble by just posting one of John’s tracks every day, for the duration of the Advent Calendar.

But no, I couldn’t. I have this unfailing moral compass, you see. Also, I just came up with that idea now, eighteen days too late.

The delivery media has changed over the years. The first ones were cassettes. I’d rip open John’s mailer right in the front seat of the car and presto, that was my holiday soundtrack during every drive for the next few weeks. Then John moved to CDs. Those were still fine because I had my Discman in the car.

Now I have to rip it into MP3s. Which is kind of cool because John’s holiday mixtape is the only playlist on my iPhone whose songs are labeled only as “Track 01…Track 02…Track 03…” Which means that I don’t know that I’m about to hear The O.C. Supertones’ edition of “Joy To The World” until I’m hearing it.

The online music revolution has added a new wrinkle: now, if I like a certain song, I can quickly hit the iTunes store or Amazon and check out the whole rest of the album. And so I have come to own “We Three Kings,” the Reverend Horton Heat’s holiday album. On principle, I can’t recommend the track that John included in this year’s compilation (“Frosty The Snowman”), but in the universe of made-up Holiday characters, Rudolph has always been Batman to Frosty’s Superman.

(Wait, Frosty’s hat is magical. And magic is Superman’s sole weakness other than Kryptonite. But Rudoph’s backstory — a childhood during which he learned that the world is a cruel place where only the strong endure — is a better fit for Batman, isn’t it? Maybe Frosty is Bizarro-Superman, who is only vulnerable when the magic is removed?)

I love the Good Reverend. And this is the sort of Christmas cover song that I like: the musicians seem to be  envisioning a day when they’ll be playing this tune for their own kids. So there’s no need for clumsy, self-conscious “edginess,” adding lyrics about how Santa is going to butcher Rudolph into stew meat for the elves if he doesn’t drag his ass into harness and pull the damned sleigh.

It does provoke you to muse a bit about how well these various editions work. It’s said that despite your attempts to change or deny your tastes, they’re set pretty firmly by the time you get out high school. If you hate a certain movie, it’s at least partly because it’s nothing like a similar movie you enjoyed as a kid. Ditto for music, ditto for TV shows, comics…anything.

I associate most of these standard Christmas songs with childhood Christmas Eves at my grandparents’ house. So when I think “Frosty The Snowman” I think of music pumping out of a blondwood console stereo, either tuned into a 60-year-old couple’s favorite FM station, or spinning an old LP pulled out of a sliding compartment underneath the turntable.

But the kids today, with their flared trousers and their Spacepages and such! Will they define “Rudolph” by the modern versions? Or will all of these bedrock standards just die off completely in favor of songs recorded in the Eighties and Nineties?

Well, back to you, John. I’d like to see a rough cut of the 2009 edition by…shall we say January 20? That’ll give you plenty of time. And don’t even try making this one suck in an attempt to get out of doing this every year; I’ll see right through that trick.

Linky-linky, Amazon MP3, you please to buy now, thank you:

Purchasing the track from the iTunes Store remains an option. You’ll get it at puny 128K bitrate and it’ll be shackled in the unjust furious chains of DRM. And I won’t get those few coppers from my Amazon Associates link.

But yes: you can buy it from the iTunes Store. I didn’t figure you for being “that guy.” Well, it’s a free country.