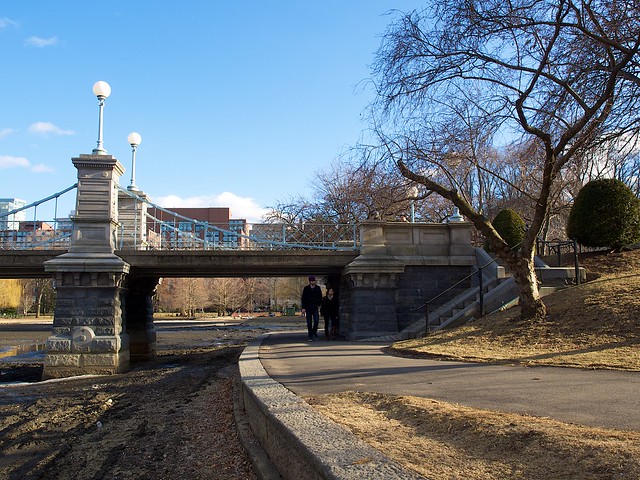 Same as before. One of the photos in this group was shot with an iPhone 5. The others were shot with other phones…and one was shot with a conventional camera. For the big finale, I’ve expanded the lineup to seven perps instead of just five:

And just like before, I haven’t made any changes to exposure, color, or sharpness. All I’ve done is crop the same section of each photo and scale it to 300×400 pixels for comparison.

Which is your favorite? And can you spot the iPhone 5 image?

Thanks for all of your comments, by the way. This isn’t a scientific test by any means, but all of these subjective reactions to these side-by-side comparisons are very useful to me.

My three-part review of the iPhone 5 begins tomorrow…with a discussion of the iPhone 5’s camera. When the column hits the web, I’ll publish the answers to each of these little quizzes. What…you think I’d entitle the Washington post “Part 1” and not have more?

Here’s you’re next case, Angels. The same shot taken five times with the same five imaging devices as the Washington photo. One of these was shot with an iPhone 5. The rest were shot with devices available in stores today. Click the image to visit Flickr and see an embiggened version. Come back here for comments.

I’ve made no edits to exposure, color, or sharpness…I just cropped a section out for close examination.

Which one was shot with the iPhone 5? Dear Aperture, An App That I Love:

When my WiFi is misbehaving, you keep interrupting my work in other apps to report that you’re having trouble connecting to MobileMe. I have never so much as implied that I have any interest in MobileMe galleries. Yet you do this several times an hour.

When you get into this sort of fugue, you’re like a waiter who keeps interrupting my meal and my conversation every ten minutes to tell me that if I was thinking about ordering the broccoli custard for dessert, alas, the kitchen has run out.

This waiter will still receive a gratuity. He is doing the wrong thing, but I appreciate it’s coming from his drive to provide excellent service. Still: 15%, tops.

Just FYI. You do know that in a few weeks’ time, there will be no MobileMe to connect to?

[Edited to add: Yes, darlings, I know how to remove MobileMe from Aperture’s radar. I just think it’s odd that the default position of this app is to attempt to maintain a connection to a service that the user hasn’t expressed any interest in, and isn’t using.]

You know, walking on the surface of the moon, there really is nothing more irrelevant than having a watch telling you the time in Houston.

It’s interesting how Aldrin has become the most visible and recognizable spokesperson for the Apollo alumni. Plenty of those guys are still around and they’re not exactly recluses; just last week, I caught an episode of “History Detectives” where the historian paid a visit to Apollo 12 LMP Alan Bean in his art studio.

But Aldrin is the one astronaut who’s made himself Available with a capital “A.”

Hmm. A half-formed joke in my head has quickly turned into an actual idea: wouldn’t you tune in to watch a 6-episode documentary-style reality show about someone who once walked on the moon?

These guys lead interesting lives. If they weren’t already driven, focused, goal-oriented people, they wouldn’t have made it into the astronaut program. Their post-lunar-golfing careers tend to point that out. I’m interested in their usual circuits of speaking gigs and advisory boards. I’m also interested to know how many years passed by before they began to think of their lunar expeditions in much the same way as someone in a (literally) mundane line of work might regard a big business trip they took a long time ago.

Or does that ever happen? I really want to see these astronauts’ living rooms. I want to see a scene where they’re flipping channels in their living rooms, and then set the remote down on a glass display box. To them, it’s a handy surface next to the couch. If a visitor asks a stammering, awestruck question, the answer would be “Oh, yeah, that’s one of the gloves I wore during the extravehicular parts of my Moon mission. Sorry it’s so filthy. That’s why Judy made me put it in that box…once you get lunar regolith on a sofa slipcover, you just have to throw it out.”

I like the idea because I’m fascinated by a simple question: after you’ve seen the Earth as a dot on the horizon of another planet…I mean, how do you follow that up? Alan Bean went on to command a Skylab mission and stayed on at NASA as an administrator. But then there came the day when he dropped the stick and picked up a paintbrush, feeling a higher passion to document the space program through art.

But I admit that I also have a lowbrow interest in seeing what happens when, say, a clerk at Starbucks is rude to Charlie Duke. How would he respond?

“I’m sorry. I didn’t happen to see the sign,” he might amiably say, indicating a placard reading “This Line For Starbucks Cardholders Only,” which was mostly obscured by unsold CDs.

“But to answer your question: yes, I can read. Here, I’ll prove it: ‘Breakfast sandwiches are not served after 11 AM’. See? Yes, indeed, reading is just one of the many, many physical and mental tests I had to pass before NASA selected me for their fifth class of astronauts in 1966. And no wonder: they made me read lots of things in my years of preparation for, and even during, the more than twenty hours I spent walking on the surface of the Moon.”

The clerk hands him his change without saying anything.

“And because you apparently don’t even have the courtesy to apologize for having been so rude to a senior citizen, I will now also point out that when I was about your age, I had already qualified to fly supersonic fighter planes.” 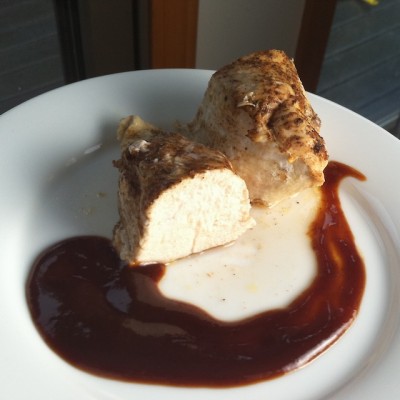 Today’s been a pretty busy workday. I didn’t have time to make a big production of dinner. I just rubbed some olive oil and seasonings onto a chicken breast, sealed it in a foil pouch, and tossed it into the oven for twenty minutes…like I’ve done a thousand times.

And when the chicken was done, I found myself slicing it into two pieces and arranging them artfully.

(Photo taken with my iPhone 4, with assistance from my video lighting rig…still in place after recording MacBreak Weekly an hour earlier).