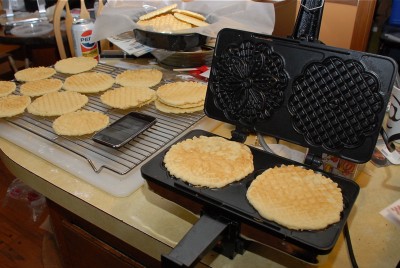 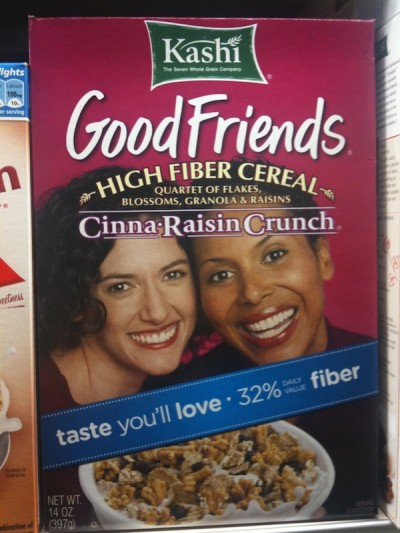 After three years, 10,000 Tweets, and being followed by more than 35,000 people, I still don’t have a good answer to the question “But what’s the point of Twitter?” I’ve come up with two responses that work.

Apparently, Twitter is either a boat or a sliver of soap, depending on who’s asking me and who’s listening.

If my audience sincerely and earnestly wants to understand Twitter, I tell them “It’s like a boat. Anybody can use a Twitter account just for fun. A much smaller percentage are leading the kind of lives in which it’s actually useful. And a tiny, tiny fraction are making money with the thing.” If it’s a conversational kind of request, I say “Think of that sliver of soap left in the dish. That’s a single Tweet. All by itself, it’s worthless. Squeeze lots of them together, and you’ll eventually have something with weight and substance.”

But I guess Twitter is like my iPhone 4. Sometimes the best endorsement you can make — and the only endorsement that really matters — is the simple fact that you use the hell out of this thing, and that your week would be very, very different without it.

I got a taste of that over the past few days. For the past couple of weeks, I’d been aware that I was nearing my 10,000th Tweet. I knew I wanted to do something a little bit special for #10,000. Eventually I got to #9998, which meant that I had just enough shots left to announce what I was going to do and then to do it…which also meant that I couldn’t Tweet anything at all until I figured out what those things were going to be.

Behold, The Answer: I did my 10,000th Tweet on Ustream. Click away, but I should warn you that there’s an Anthony Newley impression coming.

“What should my 10,000th Tweet be?” I wondered. I came up with a halfway decent “140-character novel.” Naw. I thought about just being sincere and sweet and thanking the folks who’ve supported my work in various ways. Mmm…naah. When the right idea came, I instantly recognized that there could be no more appropriate way to crystallize my previous 9,999 Tweets.

But yes, these Big Plans meant that I had to stop Twittering for a few days, to preserve the #10,000 slot. Going without Twitter for 72 hours served to remind me about the things I most enjoy about the service.

I missed the ongoing communication with the people who read my columns and listen to my podcasts. There’s an immediacy and a conversational tone to the Twitter timeline that doesn’t exist in any other medium. I like responding to questions and I also like hearing good and bad reactions. Either way, comments are usually to the point, and valuable.

I missed those little moments of time with my friends. If I could afford to send each of my friends one of those baskets of fresh fruit cut into flowery shapes a few times a week, I could. Commenting on a particularly cool of interesting tweet of theirs is close enough, though it really does next to nothing to combat the spread of scurvy and The Ghost Disease among the geek populace.

Not Tweeting has been a little like watching milk go bad in my fridge. Little things pop into my head and maybe they’re of no use to anybody, but they’re fun little strings of words. Twitter is the only place where I can post them, really, and if I try to “save them up” for a later date, they go completely stale after sitting in my head for so long. “I was acting on impulse” isn’t a great explanation for why you did something stupid, but it’s still a hell of a lot better than having to admit that yes, you thought about it for two or three days and it still seemed like a solid idea. This admission is often the precursor to a fiancee maintaining her composure just long enough to twist the engagement ring from her finger and fling it at you with enough force that you’re going to want to apply a little Bactine to the wound.

I don’t feel like I’ve done all I can for something I’ve just written and published until I’ve Tweeted a link. And here we get to the Business end of Twitter. I was looking through my Flickr feed the other day, specifically looking for “orphan” photos that haven’t been organized into any existing photoset before. It’s not hard to figure out why some of these have received just four or five hundred views over the course of a year and another one got 2,000 in just a week: I Tweeted a link to one of them.

I create and publish things for many different reasons and they vary from item to item but yes, somewhere in the back of my mind “I’d like people to see this” is always on the list. I can come up with what I think is an interesting idea, research and write it well, edit it carefully, and publish it. But I’ve got this list of 35,000 people who at some point clicked a button to indicate that they’re somewhat interested in the stuff I post. Until I’ve posted a link to Twitter, I feel like the job is only partially-complete. If it fails to catch on, it fails to catch on…but just like sending a kid off to school with a good, hot breakfast in his or her belly, I feel as though I gave this piece every reasonable advantage.

And Twitter just keeps getting more and more important. Yesterday, I downloaded the sort of app that gets all of my Nerd Parts tingling. Within the first ten minutes of using Flipboard and linking it to my Twitter account, it seemed as though writing a review of it became the most important thing that I would ever do. Phrases like “From now on, instead of vaguely talking about the future of magazines and newspapers, we should just point to Flipboard and then break into discussion groups” and “This free app will justify at least $150 of the money you spend for your iPad” came straight to mind.

(When I feel this exuberant about something…yeah, I quickly realize that I need to calm down and see how I feel after a few more days.) 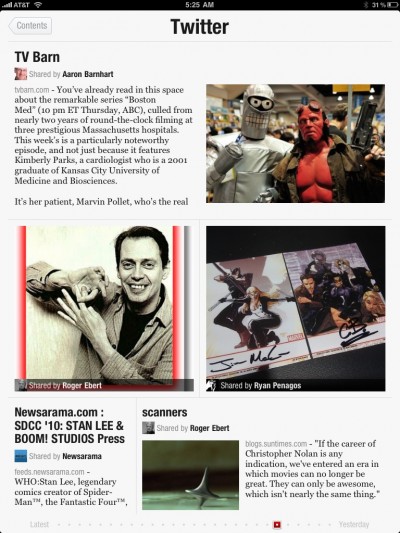 Flipboard: it really feels like the way I'll be getting 80% of my news from now on.

Still! What a brilliant idea. I follow about 250 people on Twitter. This is, exclusively, a list of people and institutions whose opinions matter to me (actual friends, and writers or publications who regularly write things that I want to read). Their Tweets are of interest to me. These people also often Tweet links to articles and other content that they think is valuable.

Flipboard strip-mines your Twitter follows for content and links, and assembles it all into a beautiful digital magazine of fresh content. I’d say it’s almost “suspiciously” beautiful. Like the Mechanical Turk, it’s hard to imagine that this on-the-fly design and layout is the result of an automaton working without human intervention.

It’s not a Twitter client, really. But yes, you can reply to Tweets and Star the original posts and whatnot.

The app was just released a day ago, so details are still a little sketchy. In addition to linking to Twitter and Facebook, there are “curated” channels whose sources are managed by the Flipboard team…and other social-media sources are coming soon. I almost wore out some of the glass on my iPad tapping and searching for a way to add my Flickr feeds to FlipBoard; a “National Geographic”-style viewer for all of my friends’ photos is going to be a killer feature.

When I first tried Twitter (let’s see: “March 22, 2007” — oh, my…were we ever that young?) I dismissed it as just a useless micro-trend. Then my friends started to join, and it became entertaining. Then, it somehow became important. I truly value the Twitter infrastructure. I’ve never been interested in playing the Numbers Game; having a certain number of Followers doesn’t motivate me. It’s the connections represented by the 282 people whom I follow and the 35,589 people who follow me that I rely upon. It’s not something that can be engineered. It has to be grown over time.

I had an awareness of the value of the unique shape of this thing called “my peculiar use of Twitter” before Flipboard was released. Flipboard is just the first app that makes that value so tangible.

Well, then. The next milestone, I think, will be 50,000 Twitter followers. I have at least a couple of years to think about how I’m going to mark that occasion. I hope to do something big but even so: expect a cash bar.