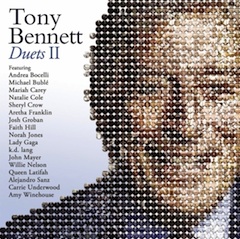 The Lady Is A Tramp

I’m actually speaking, of course, of Lady Gaga. I admit without hesitation or qualification that I was wrong, wrong, wrong when I assumed that she was (at best) a mediocre singer. Why did I make that assumption? I dunno. I mean, she ripped off so much else from Madonna…

Okay, I apologize for that.

The actual explanation: I’ve only heard a few of Gaga’s songs and in each of them, her natural singing voice was tightly shrinkwrapped behind a wall of production trickery. Overprocessing is a big help to the mediocre singers — it putties in all of the lows and cracks in a performance — but when the lady can actually sing, heavy production also sands down the highs.

It might be a point of pride that causes a true vocalist to put one track on the album in which it’s just them and a microphone. I think it’s why many stage magicians wedge a selection of slight-of-hand tricks in between the Swallowing A Gulfstream Jet Trick and the Flaming Elephant Escape Illusion. Showbiz is showbiz, but it’s a point of pride to demonstrate that you have the sort of skills that come from dedication and hard work in addition to the sort of buying power that lets you bring in whatever hardware that a miracle requires.

Tony Bennett kicked it up a notch by singing a capella in his live shows…without even any assistance from a microphone. This here’s a crummy phone video but it was shot during a Radio City Music Hall performance. This is not a small venue:

I believe that this was shot in 2007. When Mr. Bennett was EIGHTY-ONE YEARS OLD.

Dammit, if ever there was a time when the HTML "BLINK" tag was 100% called for…

Onward. Yes. Please. More Gaga tracks like this one: the lady has some serious pipes and the track makes me want to seek out more of her music. If she ever released an “American songbook” album, I’d consider that a pretty quick 1-click.

Maybe in a couple of years, after she and her fans get itchy for her Next Thing. I did see her HBO concert special, and (yes) I thought there was too much staging and too much flash. Those things do a remarkable job of obscuring her talent. The show was all meat dress and no steak.

Allow me to make an overly-precious simile. There’s a restaurant up above Boulder, Colorado that serves all kinds of game. I used to eat dinner there once every year. I’d always order the oddest thing on the menu just on principle and the experience taught me something important. One year, I ordered emu. It arrived as a thick, grilled steak with very light seasoning. A little salt and pepper? Maybe.

One year, I ordered alligator. It arrived slathered in cheese and heavy sauces.

The clear lesson: terrific ingredients can stand on their own. If it’s something that Humanity was never meant to consume, the chef covers it in enough gunk that you can’t taste it at all.

So when I see a performer who works so hard at being so outrageous…yes, my prejudices get the better of me. I assume that it’s a crocodile quesadilla.

(Aside: Emu is heavenly. It’s truly a fusion of the best elements of red and white meat.)

Seriously, I was wrong, wrong, wrong. But that’s marketing for you. As a consumer, I’m not obligated to try out every song, movie, or TV show. I’m to be forgiven for applying what I’ve learned from past experience when deciding how to best invest my time and money, right?

Lady Gaga is more like Cyndi Lauper than Madonna. Lauper, too, had — and still has — an incredible voice and an outrageous style that might have caused some people to draw the wrong conclusion and turn away. But she had the advantage of coming on to the popular scene in the early Eighties, when audio production tools were still analog and a fantastic voice could still fight its way through whatever layers of spray-on gold and gloss that a producer attempted to slap on it.

This is Tony Bennett’s second album of duets and like its predecessor it helps expunge my memory of Frank Sinatra’s end-of-career “Duets” albums. Sinatra’s handlers arranged for a nice lineup of talent, but they all essentially performed karaoke to Sinatra’s pre-recorded tracks. Bennett’s duets are real, in-studio collaborations and it shows. “The Lady Is A Tramp” is one of the standouts; Bennett and Gaga really sound like they’re having a great time together.

Try or buy “The Lady Is A Tramp” on the Amazon MP3 Store. Anything you buy on Amazon after clicking the link will result in my receiving a small kickback in the form of Amazon store credits. Which, I assure you, I shall spend on Lovely and Foolish Things.