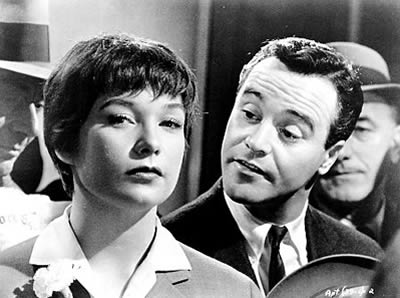 It disappoints me that the computers that are embedded in common household devices keep getting more and more powerful and yet it’s rare when a new toaster oven does something that surprises and delights you.

Okay, bad example. But you know what I mean. There was a happy accident this morning: I happened to wake up about five minutes before “The Apartment” started on cable. It got me thinking about my cable box. These days a cable box is a real computer with a real OS and a real developers’ kit, with a full network connection and everything.

And yet what does it really do, beyond changing channels and displaying an onscreen programming guide? I’d pay ten bucks for an app that let me tell the box “If there’s a Billy Wilder/Jack Lemmon movie starting up between 7 and 10 AM, then turn on the TV, tune it to that channel, display the title of the movie on the screen, and play an alarm clock sound ten minutes before the movie begins.”

Actually, I’d even pay five bucks per month for it as a service. There’s be a whole list of things Worth Waking Me Up For; I’d keep adding stuff to it as I go. Over the years I’ve tried and failed to find a surefire alarm clock. I even wrote an app that wouldn’t turn off the alarm until I keyed in the square root of the number on the screen, to short circuit the “reach over and slap the ‘snooze’ button” gambit but I got around it via the simple expediency of sleeping through the noise.

But would I go back to sleep knowing that I was going to miss “Goodfellas”? The “Two Cathedrals” episode of “West Wing” or a “Reno, 911” marathon? No, no.

Let’s see. We need to refine this a little so that the cable box doesn’t wake me up unless it’s nearly time for me to wake up anyway. I bet the computer could get a good idea of my waking and sleeping hours from the remote activity; during late hours of the day, it can reasonably guess that if the cable box is asleep, then so am I.

So: the “wake me for a good show” window opens six hours after there’s no activity on the cable box. And the window closes at 11, when I’m out of bed anyway.

(Probably out of bed.)

I suspect that this feature would be a big hit with freelancers who make their own daily schedules and college students who never had any intention of attending their 8:30 AM English Lit classes in the first place.

The important thing with ideas like this one is to know when to stop developing it. If the cable box is keeping an eye on my sleep rhythms, all kinds of things are possible…including “Mom” modes in which you try to watch something at 2 AM on a Tuesday and it throws up a curt notice reading “On a school night?”

If the thing you’re trying to watch is on Cinemax, it adds the line “…and you should really find yourself a girlfriend.”