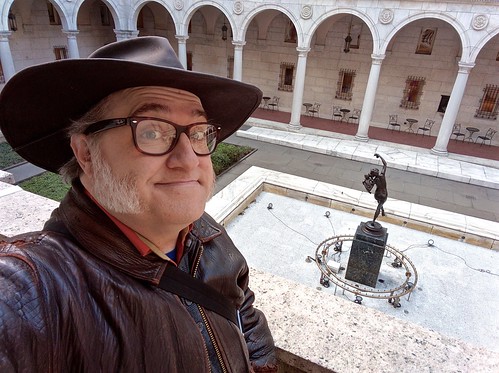 You enter the Boston Public Library from Dartmouth Street. You pass under a sculpture by Augustus Saint Gaudens, past one by Frederick MacMonnies, through bronze relief doors sculpted by Daniel Chester French. These open into a lobby with arched ceilings covered in mosaics. You ascend a staircase fitted with yellow and amber marble from a defunct quarry that was reopened especially for this contract. You then turn left, or right, before the closed and locked set of oak doors at the head of this flight of stairs. You pass by one of the two magnificent stone lions carved by Louis Saint Gaudens, and continue to ascend, underneath a series of murals by Puvis de Chevannes.

Yes. Locked. Always locked. Just past it is a public balcony above the courtyard. But the doors are locked. Always. Been coming here twenty years. Never seen anyone on that balcony, ever. Except in a photo from 1896. 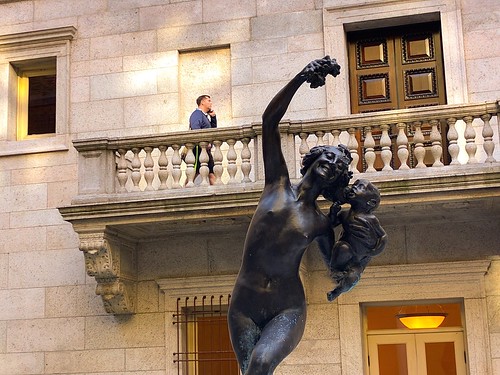 …When there was a tourist up there talking on his cellphone.

…Because somebody screwed up and left them unlocked.

There are very few parts of the library where I haven’t been, at this point. We’re down to “the parts for staffmembers” and “the board of trustees room” and “parts that are always closed.”

I have a plan to visit the Trustees room. It involves becoming a Trustee. I have already put the wheels in motion. Success is assured.

As to the last one…I mean, the building’s 1888 designers didn’t intend for me to visit the offices. They did intend for me to stand on that balcony. Look, I’m just saying, I know I’m not entitled to be there but I don’t feel as though I’m forbidden to be up there and if the door’s unlocked, I ain’t stopping to ask why!

I stood there and enjoyed the view and took photos until apparently someone with a radio saw me and used it to radio someone else, and shortly thereafter I was quite politely asked if Sir would mind very much not being there.

I left, immediately and courteously, with dozens of new photos in my phone and the sole regret that I didn’t have my good camera with me.

Which isn’t to say that the Nexus 5X didn’t serve me well. I took both of the above photos with it. As well as a photosphere, which you can view on Google Photos. Though (grr) it’s slightly janked-up.