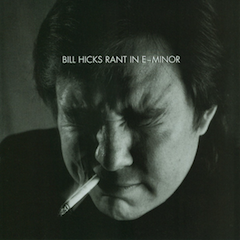 I’m going to wind down my “Comedy (But Let’s Acknowledge Them For Something Other Than Their Comedy)” thread by dropping the parenthetical. Bill Hicks died in 1994 at age 32 and he still looms large. His comedy was so very intense. But his anger wasn’t just a prop; it was a lens that brought a clarity to every thought he expressed and intensified the light he was shining on an idea.

“Artistic Roll Call” is…really something. Mr. Hicks has some rather strong opinions on Jay Leno and the direction that he chose for himself and his comedy. Yes, I know: the thought “Jay Leno is to comedy what Olive Garden is to dining out” is as overplayed today as “Hey, what’s the deal with those tiny packets of peanuts they give you on airplanes?”

It’s noteworthy for two reasons: first, this was recorded sometime just after Leno had taken over the Tonight Show. At the time, he was talking about something that was very much on his mind, as opposed to going to a cheap and easy putdown.

Secondly…oh, wow. Just listen to him. This is an outpouring of genuine anger. Anger that a once-great comedian had chosen to change his comedic voice into a marketable product. Disappointment that Leno had seen any value whatsoever in doing commercials.

And it went even deeper than that! The rest of Hicks’ work makes it clear that this bit also reflected his frustration in our national character. Why did Leno make these choices? Because they work. Broad, harmless humor entertains way more people than the stuff that’s targeted and meant to bruise. Why was Leno shilling Doritos? It was a Sound Business Decision. A big check for not a whole lot of his time, and all the while, it got his face out there in front of people.

I don’t agree with everything Hicks says on the CDs and videos of his standup. He also had a great bit about the JFK assassination: “If you go to Dealey Plaza, there’s a museum on the sixth floor,” he says. “They’ve recreated the so-called ‘sniper’s nest’ exactly the way it was on the day of the assassination. And you know it’s completely accurate because…Oswald isn’t in it.”

I’ll go ahead and embed this clip. Warning: The audio isn’t work-safe.

Let’s not get into a long digression about the assassination. To conspiracists, I will just ask “What about the long, skinny package wrapped in brown paper that Oswald brought in to work that morning?” (yes, that really happened) and move on.

I’m also not 100% on board with bashing Leno at least not (holy mother of God) this savagely. True, I haven’t had any use for his comedy since he stopped doing the Letterman show. But being a comedian isn’t like being a company CEO, where you’re well-insulated from the fallout from your decisions. Leno appears to be happy. He gets to work on cars, tell jokes at 11:30 PM, and also do several standup gigs a week. I think the canonical line on Jay’s career comes from Bill Carter’s terrific book about the Late Night Wars II, quoting a producer who acknowledges Jay’s ratings but then says “at the end of the day, though, who would you rather be? Jay Leno…or David Letterman?”

Yes, his material is about offering audiences some distraction, not depth. But Leno doesn’t seem to care about that. So…shrug.

I’m fascinated by the construction of this rant, though. It’s utterly brutal. There aren’t even many jokes in this bit. He just keeps expressing his anger and his disappointment in different and novel ways. We shouldn’t call it a rant. It’s not unfocused, out-of-control rage; the bit works because Hicks is in full control throughout. A great standup comic is just like a great magician. It’s all about maintaining control of the audience. Hicks proceeds through his material, but always with his antennae fully extended and maintaining a sharp, moment-my-moment read on where their perceptions are, and how best to manipulate those perceptions.

And that’s how he avoids turning anger and frustration into a tool towards uncovering greater truth, instead of a catchphrase that lets the audience and himself avoid it entirely. Sam Kinison was funny as hell, but he asked so little of an audience. When he screamed into the microphone, the audience was relieved, almost; it was his signature, on the level of Steve Martin yelling “Well, ex-cuuuuuuusssseeeee meeeeeeee!!!” Late in his career, the scream was a welcome sign that this was all stagecraft. The knives onstage are all made out of rubber and that soon, the curtain will rise again and Caesar will be alive to take his bows.

No such luck with Hicks. I enjoy his performances for the sounds from the audiences as much as anything else. Unified cheers and laughter are rare; usually, the laughter is mixed with discomfort, and there are many nervous silences. During the “JFK” bit, I feel as though Hicks is angry at me. I want to clear my throat and stammer and say “Well, all right, I believe what the government is telling me about the JFK assassination, but I don’t believe everything they tell me. Except when they tell me what kinds of food are safe to eat. And what level of regular maintenance is OK for an airplane. And…”

“Don’t worry,” he reassures the audience, when he senses that he’s dug himself into a deep hole. “I’ll start telling d*** jokes soon.”

I mentioned earlier that I respect the fact that Leno made his choices and accepted the consequences. The same’s true of Hicks. Leno wanted an audience, to the extreme of completely desaturating his act to an institutional shade of beige. Hicks wanted authenticity, to the extreme of making it hard to create material that would fill every seat in a US theater. Or, pursue any source of income away from the stage of a comedy club. Barring an absolutely stunning statement of theological reversal, Hicks couldn’t have pursued TV (unless it was unsponsored, and aired on a network owned by an independent company).

If he’d lived, I think his decades of onstage sincerity and integrity would have finally paid off. Not because American audience are any more enlightened today. Oh, wow, my head spins just thinking about what he’d be saying about our “Hope And Change” President’s use of drone strikes!

This is an age when you can do almost as well with a small audience of people who absolutely love you as you can with a large audience of people who think you’re marginally less objectionable than whoever’s on the other channel. His access to his audience wouldn’t have been controlled by any large company (a network, a promoter, a record label). He could sell tickets, audio, and video directly to his fans.

And the power of social networks to spread something around to millions of people isn’t compatible with “bland and populist” material When was the last time someone Tweeted a link and said “Oh, wow, you HAVE to see what Leno said in his monologue last night!”?

Hicks seems like a reminder that you often have to keep the faith that a longterm equity investment will eventually pay off. All of the Hicks standup material we have is, alas, all of the material we’ll ever have. The point of view and the voice he had built after 15 years was amazing. And it was strong footing for whatever he would have built on top of it.

32 seems to be an age when many successful creative people get a little antsy and bored, and they start questioning what’s been working so far. They’ve built up a hell of a lot of knowledge and experience. What do they want to do with it? Often, they either try to use those same skills in different ways, or they try to augment what they have by developing a different set of skills.

When you listen to a few hours of Hicks’ released standup, you come away (a) hoarse from laughter, (b) profoundly impressed, and (c) aware that there was some distance between Hicks and the audience. He feels a frustration with the world, and the people in those seats are part of the problem.

Richard Pryor, at the height of his powers, often found a way to quietly suggest — so subtly that you didn’t even think of it until long after — that you and he were there in the room to start working on a solution. Parts of his standup films are genuinely cathartic.

So I wonder what he would have built by age 50. The knowledge that you have an audience can drive you to narcissism. Or, it can drive you towards introspection. Here you have 1000 people who will be hanging on your every word for 70 minutes. What should you do with their attention? What would you like them to be thinking about the next morning?

It’s perfectly fine to send an audience away thinking nothing more substantive than “I definitely got $75 worth of entertainment for my $50 ticket.” One might even make a credible case that people pay $50 to attend a comedy show with a view towards laughing hard. I’m fascinated by Bill Hicks, but the fact that most of the other comedians I love “merely” entertain me shouldn’t be considered a mark against them.

And of course, dying young is the ultimate rose-colored filter. Every brave person becomes a colossus and every talented performer becomes a genius. All because of the feats they never had a chance to achieve, and the works they never had a chance to create. The bizarre dementia of a fan is that we keep expecting great things from the ones we worship, even long after they’ve died.

Preview “Artistic Roll Call” on the Amazon MP3 Store. Anything you buy from Amazon after clicking that link will result in my receiving a small kickback in the form of store credits, which I will then spend on silly and wonderful things.

And yes, I’m quite aware of the dissonance of praising Bill Hicks and then encouraging you to buy things from large corporations. I’m not willing to sell my artistic soul like Jay Leno. But I’m willing to rent out parts of it in exchange for camera equipment.