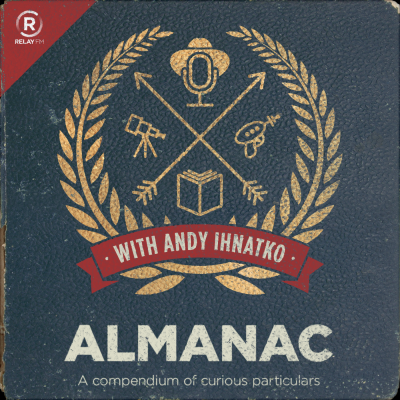 What a crazy week to launch a new podcast! But yes,”Launched,” Almanac has. Speak like Yoda, I will not, in the rest of this post.

Relay.fm and I are launching a new podcast today! Behold, “Almanac.”

RSS? Sure! Here’s an RSS link!

Just please subscribe. Assuming, of course, that the idea of a brand-new podcast by me interests you.

Here’s a Relay.fm blog post about the new show. Very bold of them. They can’t distance themselves from the project later. Which puts a little extra pressure on me.

First…is that not an amazing show logo? I’ve been looking at it all summer and it still blows me away. We went through only a few iterations and working with Relay and the Grafiksyndikat studio was a dream. Whenever I made a suggestion, they intuited the meaning of the suggestion and came back with something ten times better than I could have proposed.

The final result looks as if the studio has been listening to this new show for a hundred years and know exactly what it’s about.

(About that pebbled texture: it’s the back cover of a 160-year-old almanac from my personal library. Authenticity!)

Second: here’s the short pitch. The editorial mission of “Almanac” is to be…an almanac. Not a dictionary or an encyclopedia, whose missions are to contain all knowledge, and make sure it’s all factual. The latter point sounds like a real time-suck. No, I love almanacs and collect them because they represent the unique point of view of a specific, idiosyncratic editor. More often than not, an editor who got fired from every other publisher because he or she was more interested in researching the origin and evolution of jar lids than the annual rainfall in the Indus Basin.

“Almanac” will always be more than just one thing. But its center of gravity will always be topic that interest me, usually explored with people I’m interested in speaking with. In the coming weeks, you’ll hear conversations with a principal broadway castmember of “Cats,” the producers and directors of a documentary about “the ultramarathon trail race that eats its young.”

And now, strap in for the extended cut about “Almanac.”

Podcasting has become a great joy for me, and a great adventure. Not a few years before podcasting began to mature as a medium — you know, when podcasts stopped being about podcasts and podcast listeners were no longer simply fans of podcast apps — I’d adjusted my definition of my career mission. I felt that I wasn’t doing everything I wanted to do, or everything I was capable of, unless I thought of myself as an “educator” rather than a writer or even a journalist.

So I started to do a lot more TV and radio…because there are people who don’t get most of their info from print or websites. I also tried to stop thinking of the things I write as long magazine articles that tell a story from beginning to end. That is, that’s still my favorite thing in the world and I’ll keep doing that as long as editors and readers are willing to let me get away with it. But since my teenage years as a newbie magazine columnist, pre-Web, many talented folks have proven that a couple of fast and timely paragraphs, or even a link to something else with a personal comment, is of tremendous value to the populace.

I still envy (in the positive sense) that skill and work to acquire it.

And fail. This here blog post was meant to be a quick “Hey, check out my new podcast” and here it is, an essay on communication. Oh, well!

When I learn a new medium, I learn a new skill. And learning how to communicate and educate through a podcast has been a ball. It’s writing, it’s performing, and it’s entertaining. I’ve learned this from all of my fave shows. Many podcasters can hold my attention forever, even though they seem to be speaking completely off-the-cuff.

It’s been a slow and steep climb for me! Somewhere in the Ihnatko Archives I must still have my very first podcast recording. This would have been back when GarageBand first incorporated podcast recording features. Under the tissue-thin excuse of “testing the feature,” I bought a Sony MiniDisc recorder. I remember pacing my office, late at night, trying to express thoughts that were crystal-clear inside my head.

There was a lot of cursing. Oh, so much cursing! And starting and stopping and restarting from scratch…

…Yeah. I hadn’t got it yet. I did a “test” podcast about Netflix movies that ran for about six shows.

But this is the Internet! That amazing place where “learning on the job” isn’t simply tolerated, but expected.

I joined the panel of MacBreak Weekly at the This Week In Tech network, and over time, got better at this whole “consider, reflect, then speak” deal. And gained some great friends in Leo Laporte and Alex Lindsay. (And Rene Ritchie, of course, when he joined us.)

I accepted my friend Dan Benjamin’s kind offer to start a show on his 5by5 network. Producing almost 180 episodes of “The Ihnatko Almanac” taught me how do more than just show up at the right time having familiarized myself with a list of topics that a producer had already prepared. I learned how to lead and produce a show that comes out every week and is designed for the long haul.

It’s hard! Obviously, yes, but there are always boneheaded mistakes that must be made! Over time, I acquired a hard-won skill: how not to put three weeks of work into a show that’s supposed to come out weekly. It helped that Dan is a friend and I enjoyed our conversations. I learned to have faith in the power of conversation and not to over-produce every last thing. Over the course of the hour, I’d often throw away whatever I’d planned to discuss, because the conversation had taken us somewhere more interesting.

Through my friend Jason Snell, I became friends with Myke Hurley. When his new podcast network Relay.fm decided to launch a Google-themed podcast, Relay invited me to join Russell Ivanovic and Yasmine Evjen. I enjoy recording Material as much as I look forward to MacBreak every week, which is a remarkable statement.

I never met Russell or Yasmine before we sat down to record our first show. We seemed to have a natural compatibility. We never sat down to formally divide the workload of putting the show together. Each was motivated to note something that needed doing, the others noted “oh, [person] is taking care of that, good!” and kept out of their way.

My backstage job at Material is essentially that of an executive editor. I put together what I imagine will be an hour’s worth of things to talk about, and I include links, summaries, and quotes when needed. Yasmine and Russell have equal input, of course, but this saves them the time, and also makes me feel less guilty about doing none of the business stuff or post-production, and having none of the hosting responsibilities.

Which set me up for “Almanac.” Remember “Almanac“? That’s the new podcast that this post was meant to tell you about.

How can you tell that you love your work? Easy: when you’re eager to work harder at it. The only thing about “The Ihnatko Almanac” that nagged at me was the hunch that it’s a show for people who like to hear me talk. And boy do Dan and I give it to them. Sometimes we chat for ninety minutes, and we never edit it. We all have a great time — Dan, me, and the listeners.

This new podcast started out with the realization that most of my favorite shows are edited and produced. They’re still lively and spontaneous! But there are few conversational pauses, and they’re produced with the awareness that there are many shows in a listener’s queue. It helps that the producers skip ahead before the listener does.

So I thought about what I would do with a more formally produced show. And even if I could do one. But I inventoried what I’d learned from MacBreak, The Ihnatko Almanac, and Material. It was obvious that I now had enough skills that when I inevitably crashed and burned after eleven shows, I could gracefully pin the public blame on a downturn in the market and a lack of advertising funds.

What is “Almanac” about?

Yeah, that’s always a tough question. I hope you won’t be scared off when I say “It’s about things I think are interesting.” I assure you that the next thought in my mind is “…and then I ask myself ‘But will the listeners find it interesting, too?'”

Myke had an admirable amount of faith in this vague idea, and we committed to the new show back in April, launch date TBD. I’m glad that one thing or the other delayed everything until the fall, because many of my initial ideas were valuable mostly in the sense that they led me to better ones.

Now, I have a template that I can look forward to filling every week. The crunchy center of most episodes will be a one-on-one conversation with someone I wanna talk to, on a subject I wanna talk about. This is preceded by a couple of short bits. If you only have ten minutes, you can at least listen to part of the show and I hope you’ll get so hooked that you’ll ditch “Fresh Air” just this once and stick with the rest of my episode.

This’ll be followed by something scripted.

No new enterprise is worth doing if you aren’t learning something in the process. The new mountain to climb with “Almanac” is the drudgery of boots-on-the-ground engineering and producing.

In April, Andy thought “And let’s tighten up and edit everything so it sounds professional.” Great idea. Where’s April Andy now, when it’s me who has to listen to my own voice for hours, cutting out every um and pause, and turn 90 minutes of conversation into something Oh My God So Very Less Than 90 Minutes?

But the work is fun. I hope that comes across in the show.

Myke and I chose this week for the launch. Neither of us was particularly aware that it was going to be election week. The case could be made that this was more my fault, given that Myke doesn’t live in this country.

I want you to picture me, at 2 AM on Wednesday morning. I’d been working at my desk for hours. I was so focused on writing project that I didn’t command-tab into Twitter or the Web even once since just past dinner.

“Finally,” I thought,” when I finished. “I can go to bed. All I need to do is edit down the intro to the new podcast, output everything as an MP3, give it a final listen, and post the file.”

And then The New York Times…

So despite all of my banana oil about launching an oh so well-edited and produced podcast…I am launching with about an hour’s worth of extemporaneous 4 AM microphoning, recorded just after having received some Shocking News, and finished way too late to even consider editing it down.

8 thoughts on “Check out my new podcast:”