I wanted to post something about David Bowie. This isn’t for you…this is for me.

I didn’t post anything last night because my very first impulse, after my involuntary “Aw, goddammit,” was to start listening to lots and lots of Bowie music. I actually hit YouTube before I hit iTunes; it’s so hard to separate the music I love with the showmanship that always blew me away (and vice-versa).

I Tweeted out links as I watched. And whaddya know: my Twitter timeline was filling up with links exactly like mine. This is the form of self-care that hundreds of Bowie fans independently chose. We didn’t run to our blogs to write some kind of a think piece, we didn’t create memes…we didn’t even come up with a hashtag. We sought solace in Bowie’s artistry, and of course that’s what we did: as lifelong fans, we knew we’d find it there.

This is the first video I played (and I know I came back to it over and over again, until I finally went to bed at 6 AM). It’s from the 1992 Freddy Mercury tribute concert at Wembley Stadium and it’s a recurring and perennial personal source of pure, mainline joy:

Honestly. If there were a nation where Annie Lennox and David Bowie were queen and king, I would have renounced my US citizenship immediately. I wouldn’t even have asked where this country is or if there were any jobs there. Don’t you want to live in a country either or both of those faces are on all of the money and stamps?

I love this video for what it is — two humans creating art at a level that no human will ever exceed — and also for what it says about David Bowie. In 1992, Bowie’s breakout album was twenty years in the past. Here, he wasn’t being trotted out as a nostalgia act, to perform one of his Beloved Hits. Okay, well, sure, fair point: “Under Pressure” was one of his 1981 hits (duetting with Sir Fredrin Mercury, of course). He’s onstage with Annie Lennox at the start of her remarkable, and still forceful, solo career and from the performances, it’s impossible to tell who’s hungrier to make good.

I associate David Bowie with a kind of “delightful restlessness.” In 1992, he had many classic anthems and number one hits behind him, but an amazing career ahead of him. If you listened to “Aladdin Sane” for the first time in 1982, it would offer as few clues about the tone and shape of 2002’s “Heathen” as a 1996 Motorola StarTAC would about Instagram.

David Bowie features in one of my earliest complete memories. It’s 1979, and my parents have brought us kids to my mom’s sister’s house on a Saturday night. The grownups are in the living room, enjoying grownup interaction, talking and smoking late into the night. They’re having a great time, partly due to the fact their two sets of kids have been shooed away to play in the basement and other parts of the house.

I’m in the room of one of my cousins and a few of us are watching “Saturday Night Live,” which for a kid at any point in the Seventies was akin to sneaking a cigarette. I don’t think anyone born after 1980 can really grasp that. The grownups, with their laughter and cigarettes, had let their guard down. “Saturday Night Live” was still in its first (possibly edgiest) cast and it was as far away from the family-friendly “Carol Burnett Show” as anyone at that time could imagine. I loved that show, too, but SNL was the kind of comedy where if you uttered one of its catchphrases inside the house, your parents would ask you where you had even heard that.

I say “first complete memory” because I can recall almost every detail of it and around it. The night is burned into my memory because I saw something I had never, ever seen before:

The Man Who Sold the World – David Bowie (Saturday Night Live) from Supernova on Vimeo.

A man in a plastic tuxedo. Two men…in dresses. And one of them appeared to be from outer space. He certainly sang as though he did.

The video is amazing (but holy mother of god, what terrible shot choices the live director made!!! To this day, I can’t watch it without shouting “**** the keyboard player! STAY ON BOWIE AND THE BACKUP SINGERS, YOU IDIOT!!!”).

I was at the perfect age to be exposed to something like that. I was still far enough from adulthood that “strange” always equals “interesting and worthy of further investigation.” Grownups think they know enough about the world that they frequently react to something new by thinking “oh…it’s one of…those” — with “those” being something you don’t know anything about, but might have been taught to have some sort of opinion about regardless.

No, Young Andy thought that these three men were very, very interesting.

It must have been a few more years before I started building my own taste in music. As a Snotty Teen™, I gravitated towards “music that nobody else in school thinks is popular,” a policy that I can’t 100% defend but which nonetheless paid huge dividends. It wasn’t long before I rediscovered the man in the plastic tuxedo, as well as the man from outer space behind him who, in the interval had acquired a plastic tuxedo of his own (Klaus Nomi), who went on to a distinctive, and sadly short, recording career before dying in 1983).

Discovering Bowie in the 1980s was like discovering the Discworld or Cadfael mysteries late in the game. There’s just so much material out there, and in the space of one school semester, you can binge on a story that originally played out over well more than a decade. How the hell did Bowie’s original fans manage to wait a whole year between “Hunky Dory” and “Ziggy Stardust”?!

I listened to Bowie in all of his personae before I caught up to him in his 1980s mainstream pop phenomenon persona.

Bowie was an important influence. I didn’t adopt a Ziggy Stardust or Thin White Duke persona (I never had the right bone structure to pull off either look). His effect on me was more powerful and subtle. When I discovered David Bowie, it was like thick curtains on a huge window were being pulled apart and a set of tall, double doors had swung open: it was the beginning of my understanding of just how much bigger the world was than my room, my house, my school, my town. And that isn’t even meant as a dig against the Boston suburb I grew up in. His work urged and challenged me to open my mind, revealed to me that the things I can’t imagine are by no means unimaginable…and that elsewhere, people were expressing themselves in radically different ways and pursuing beauty across vectors and paths of which I was totally unaware.

And as I got much older, I saw him as an aspirational example. Predictability and repetition are career enhancers if you’re selling coffee or delivering packages. If you’re in a creative field, it’s death for your artistic self and it also means that you’re breaking a promise to your audience. Predictability and repetition are passion-killers. With every practically every new Bowie record, I could see the sweat on his brow as he tried to dance on uneven ground with unsure footing. And pulling it off brilliantly. I might have thought that a certain track (or, to be honest, a whole album) wasn’t very good. But I could never believe that it wasn’t exactly an album that he hadn’t invested himself in. And that’s why I remained a lifelong fan.

If I claimed that I apply these lessons to everything I do, it’d be self-flattery and an act of fraud. But I try to claw hard for the next yard of creative earth, as Bowie seemed to. And based on the personal stories I’ve seen on Twitter and elsewhere, he had that kind of influence on lots of people.

I’m not sorry that he seemed to spend the past decade laying low. If anything, it pleased me to imagine David Bowie, in his 60s, enjoying his life and his wife and his family. He owed me nothing. And yet each new album, or video, or appearance was a joy.

But of course, I meant it affectionately. Bowie never stopped being “weird,” which is to say that he never stopped engaging me, forcing me to stop, and savor, and think. He never seemed to care about giving me what I want. He always seemed determined to give me what I wanted next. 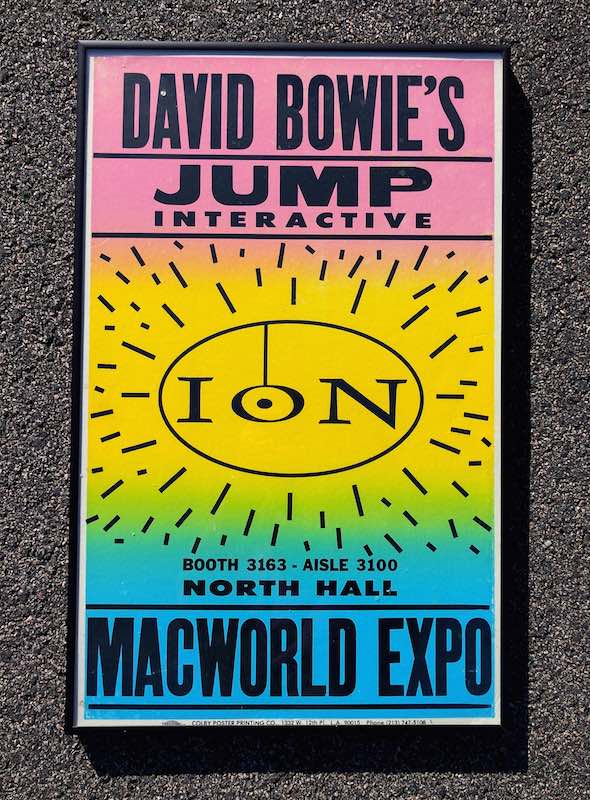 This concert poster (for a multimedia CD-ROM…hey, remember those?) has been hanging in my office for over twenty years now. Yes, I stole it. Stole the hell out of it. I saw some of these tacked up outside of the Moscone Center during Macworld Expo 1994 and I just pulled it down and strolled off with it and didn’t give it a second thought.

“I bet Ion intended for people to take these,” I thought. And when I’d worked its thick staples free from the wall, I didn’t stick around, in case someone with the company or event security was trotting up to correct my supposition.

I don’t always take home the posters and prints I’m given at conferences and conventions. I keep even fewer. Only one will be on my wall for as long as I live in places with walls.

This poster sits at the intersection of two of my most important childhood influences: Apple, and David Bowie. I can’t even use the iPhone I bought three years ago but I expect I’ll be listening to “Hunky Dory” and “Station to Station” in their entirety until the day I die.

One more thing about David Bowie: he was nice enough have been born a baritone. I’m forced to enjoy Al Green’s “Let’s Stay Together” from a respectful distance. But David Bowie invites me to sing “Fantastic Voyage” along with him. That’s very generous, I think, particularly when you considering how often I’m singing along while I’m naked and showering.