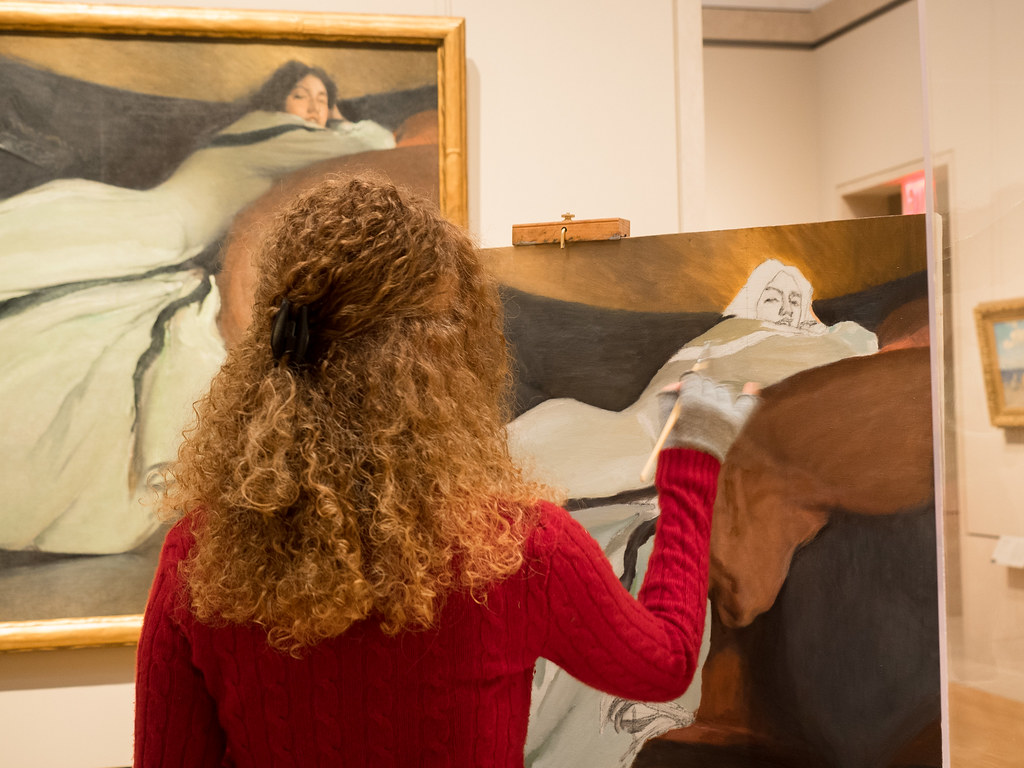 Snapped this shot at the Metropolitan Museum of Art on Thursday.

“Watching someone who’s good at something, doing that thing”: Whether it’s on TV or happening right in front of you, it’s never less than 100% enthralling.

She’s clearly not a hobbyist. I wonder if she prepared her canvas beforehand with layout lines. Because if she’s duplication the composition this precisely by eye…well! That’d be even more amazing.

I think I’m correct in calling this a reproduction and not a copy. It feels like she’s trying to reproduce what another artist had done, as opposed to reproducing the imagine itself, if that makes sense. You learn so much about another maker’s methods and thinking when you’re there trying to retrace his or her steps.

(I’m experiencing some of that right now, in fact: I’m build the WALL-E LEGO kit, designed by Pixar animating director Angus MacLane. As I fit these pieces together, I appreciate how this structure was developed and how he might have been forced to choose Path A as opposed to Path B. In the process, I feel as though I understand the mind of…)

(Well, maybe just a little bit. Hey, it was worth a show.)

So are you amazed that you’re apparently allowed to haul open tubs of PAINT into a Met gallery, and splash that stuff around in a room filled with tens of millions of dollars worth of art? To say nothing of those beautiful hardwood floors?

The Met has rules that accommodate artists and students. She had a “permit to copy” tacked prominently to the other side of the canvas, and she was working on top of a big dropcloth. I’m sure there was some sort of background check to make absolutely sure she wasn’t a rudderless NYU student who fancied herself a performance artist.

“I LEAVE MY MARK ON THE WORLD OF…“

(Tina, the camera isn’t on)

(Tina. I KNOW it isn’t on because the phone makes a little “bip” sound when it’s recording. There you go. Am I framed up? Make sure you follow my hand all the way to the groin of the painting. C’mon, hurry it up…the paint is drying while we’re standing here talking. Ready?)

“I LEAVE MY MARK ON THE WORLD OF ART! BEHOLD, THE NEW PROMETHEUS!!!”

This artist’s labors filled the gallery with the lovely and welcoming smell of linseed oil, for which I was very grateful.

Photo notes: This is another one of those “There’s no way I’m not taking this picture” public situations. I really wish she had taken a moment to stop painting and prepare more paint, or clean a brush, so I could have asked for her permission. As it was, I felt like I would have been disrupting her way more by interrupting her than I would have if I just clicked the shutter. And (bottom line) she’s out in public.

(I experienced some of that myself during this visit. No, I mean it this time. I also got some new shots of the Holsteins in the Met. It’s always a fiddly trial and error process and it doesn’t end until I solve all of the variables and finally get my shot. Meanwhile, I’m a goofy-looking guy holding up two toy cows on a little platform and trying to get a photo of them in front of a piece of sculpture. I get photographed a lot. I’d be happier if I didn’t, but I have to accept that I’m out in public and doing something likely to attract attention.)

If I talk about this stuff a lot it’s because it’s always on my mind. I don’t want to come across like a creep and I also don’t want to affect someone’s enjoyment of a public space.

At the same time, it occurred to me that she and I were both in that gallery trying to make a little art. I hope she understood.