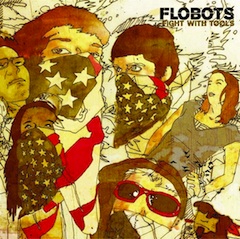 I have an idea for a new feature for a car stereo. It would be a conventional head in almost every respect, but it’d be tied into GPS (or perhaps just a motion sensor) and it would always be aware of your current speed. It could then adjust your playlists and tracks to make sure it’s always taking your current driving situation into account.

The idea of automatically switching from fast, thrashy hyper-beats to something slower and mellower every time you’re entering a school zone on a weekday is the obvious application of this technology. It’s also damned useful for songs like this one.

“Handlebars” was meant to make people look like idiots at stop lights.

As the song progresses and unfolds, you go from a gentle nodding to a full rhythmic head-bob. The bobbing spreads down your neck until it takes up your entire spine. It is only through enormous self-control that you stop it before you succomb completely; it does compel you to slide open the sunroof so you can raise an arm and extend the wave another couple of feet.

Which is all well and good when you’re whooshing along a two-lane state highway at sixty miles an hour. But then you get to the exit for your house. Muscle memory takes over and safely moves you off the highway and then stops you at the first traffic light. And that’s when you discover that for the past twenty seconds, you’ve been doing that in plain view of a carload of smarmy teens.

“Thank God they’re not laughing,” you think. They’re only restraining themselves because two of them are shooting video and they don’t want to wreck the audio.

I would pay money for this feature. Yes, I would.

Alas, we live in a shabby world and there’s a shocking lack of passion for innovation. My only choices are to risk looking foolish at stoplights, or delete “Handlebars” from any device I’m likely to use inside the car.

I’m content with my choice. That said, those girls in Braintree three weeks ago were just needlessly mean. Perhaps I’m not getting at the root of the problem. My magical peril-sensitive car stereo shouldn’t have a sensor for the motion of the car…just the presence of Mean Girls.

Try or buy “Handlebars” on the Amazon MP3 Store. Anything you buy during that session will result in my getting a small kickback in the form of Amazon credits, which I will then spend on fun and foolish things.