Well! Just look at what I just received in my Inbox! 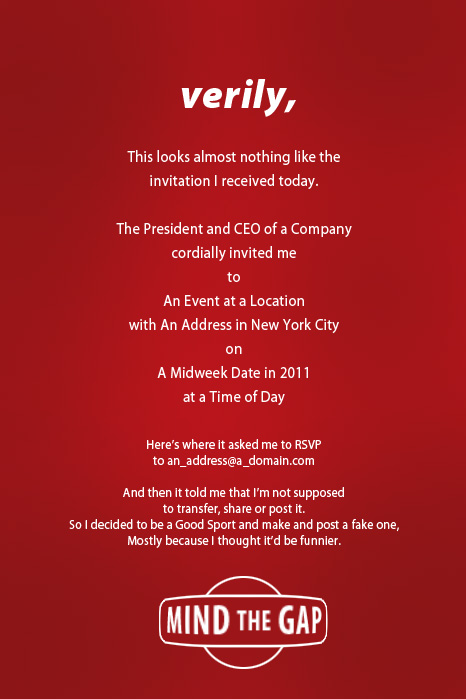 See, my theory is that The Company Wot Sent These Invites will Google around to see who posted the invite and who didn’t. And then those people will pay. Oh, boy, will they pay. I’ve already seen the actual invites posted all over the place.

Jeez. It’s as though nobody remembers the end of “Willy Wonka And The Chocolate Factory.”

(But seriously. The Company Wot Sent This wouldn’t have set up this event this way if they weren’t OK with the information getting out. The obvious rule is that you don’t expect people in the press to keep a secret unless you ask them “Are you willing to keep this a secret?” before you tell the secret.)

In unrelated news, I’ll be in New York early next week for the world-famous citrus parade. Ever since I was a little kid, I and my loved ones would spend the second Tuesday of January gathered around the TV, watching the live coverage.

“Are all of those floats really made out of tangelos, grapefruit, and clementines, Daddy?” I’d ask. I could hardly believe what I was seeing.

“Well, that’s what Willard Scott just said, isn’t it?” he said. “And the weatherman of the Today Show couldn’t say it if it wasn’t true. Look, son, isn’t that Gil Gerard from ‘Buck Rogers’ waving from the Juices For Nuclear Disarmament float?”

“It is!” I’d squeal. “It really is!” And then I’d wave back, even though I knew full well that Buck Rogers couldn’t see me. Oh, the charm and innocence of childhood!

And now I’ll be able to see it in person! Golly!