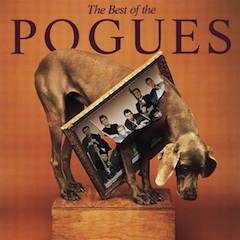 The Best of The Pogues

Note the decisive use of the hyphenated suffix. If the lyrics include references to either the Batman or the Superman of this season (Santa and Jesus) then you can clearly file it under “Holiday.” Others, even some of the standards, are merely “seasonal.” I remind you, for example, that “Frosty The Snowman” is merely a winter-themed song. It only received its religious affiliations later in its life, when the last line “…I’ll return again someday” suspiciously became “I’ll return on Christmas Day.”

(Which was right about the same time when the Pledge of Allegiance became “One nation, Under God,” I think. Coincidence? Oh, absolutely. But I’ll change my tune if I’m ever booked to appear on a popular syndicated politically-themed radio show. Four hours is a lot airtime to fill and outrage, like methane gas, expands to fill the container into which it’s been introduced.)

Let’s also tip the hat to songs that simply use Christmas as a setting. There’s no real attempt to evoke the mood or the memory of the holiday. It’s just the day when These Things Happened.

I have two favorite Christmas songs. One secular, one very doubleplus not. The first tells a story of an event on Christmas Eve; the second talks about something that happened on Christmas Day. Both have the kind of lyrics that demand to be printed out and read as poetry.

Today is Christmas Eve. This is the day in the annual Musical Advent Calendar when I say “Screw it,” — maybe “sod it” would be more appropriate? — “I don’t care if this one’s a repeat from last year. It’s time for ‘Fairytale of New York’ again.”

There never has been, nor will there ever be, a better piece of music than this. I’m not saying that Bach’s Brandenburg Concertos weren’t as good; I’m simply saying that when you compare it to this epic song about regret, loss, and longing you must ultimately conclude that these are two very different pieces of music.

I don’t think the thought “I’m someplace where I really don’t want to be” ever penetrates so strongly as when it hits you on Christmas Eve. And the root cause isn’t always something as harmless as “Uncle Gob has cornered me and he insists that it’s my duty as a concerned parent to buy one of his $1200 water filters,” either. You can always stop payment on the check as soon as you can get outside and find a signal on your iPhone. But when it appears to you that your life has been a flawless sequence of self-destructive choices and that your remaining decisions have collapsed down to “live” or “die”…well, not even the end of “A Charlie Brown Christmas” or a tube of raw Pillsbury Sugar Cookie Dough can break you free.

That’s the spot that the narrator of “Fairytale of New York” is in. It’s hard not to take pity on someone who’s in jail on a night like this but still, it’s hard to actually root for him, either. But you’re keenly interested. After I hear this song I almost always visit the lyrics. I want to sift them for more clues to what’s happening with this guy.

He’s a drunk and a gambler and probably an addict. Is he learning anything tonight? Or is he distracting himself from his situation with delusions about a past relationship? Is he giving up? Does he have any hope for himself and the future? He spends part of the song reflecting on a time when he seemed to have the world at his feet. Do those memories encourage him, or do they only drive him deeper into depression?

And whatever happened to the woman? Clearly, she’s out of his life. That must have been a good thing for both of them. Is she spending that same day in her own version of the drunk tank? Or has she found some answers that continue to elude her former partner?

Would she be flattered to know that here, at his lowest point, he consoled himself with thoughts of her? Would she pity him?

It’s a very malleable story. You could just as easily interpret the lyrics to mean that he’d made it out, found a new source of hope, and from the safety of a better life he’s thinking back to the day when he hit rock-bottom and the only cheer he could find was in a ruined relationship.

That’s the hallmark of a truly great song. It was one specific thing when it was written and recorded but its final character and flavor is only assembled and defined by the palate of the person who hears it.

There’ve been a bunch of viral Internet creations where someone takes a self-portrait with identical composition and lighting every day of his or her life for years. That suddenly seems boring. The only thing the series will teach you about yourself is “You got progressively older and you tried out only two or three new hairstyles.” But what if you were to write about the same song — particularly one as potent as “Fairytale of New York” — on the same day every year? What would the next ten to twenty annual essays reveal about the path you’ve taken through life?

Changes in weight, beards and hairstyles are easy to spot. Your assessment of yourself, the world, and how the first thing relates to the second thing can only be tracked through close examination. I would dare say that the results could be far more revealing and mortifying than a temporary distraction into the world of mullets.

For the record, I’m headed out to the first of about four or five different parties and gatherings over the next 48 hours. At the moment, I suspect that I’ll look back on this blog post and the only source of embarrassment will be the fact that back in 2010, I was using Amazon Associates links to get little kickbacks from my readers’ Amazon purchases.

I might tsk-tsk and think “How cheap and exploitative!” early on. But then I’d remember the gorilla costume I ordered with the resulting Gift credits in 2011. And then every last lingering regret will be instantly dismissed.