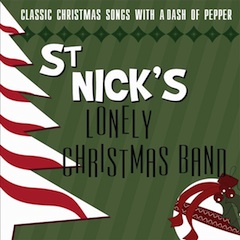 Santa Claus Is Coming To Town

Yes. Upon reflection, I do believe that we can categorize this album of Beatles-inspired Christmas standards as a “novelty record.”

But I hesitate to call it a mere “novelty song.” Anyone who owns a notebook with a built-in microphone can record a “novelty” version of the theme from “The Odd Couple” in which the melody is primarily articulated via hand farts. It’s not exactly hard work is it?

I want to show this song some proper respect. We should at least translate “novelty song” into…I dunno. French or something?

Oh, fab. Yes, let’s go with that. This is no mere novelty song: it’s a true chanson de fantaisie.

This group clearly worked very hard on this. It’s easy to get a little drunk with your friends and then joke around about a Christmas version of “Sgt. Pepper’s Lonely Hearts Club band.” It’s automatic. Soon, everyone’s calling out titles like “A Christmas Day In The Life!” “What Child Is Leaving Home!”

Lesser men and women would have let the joke drop right there. Not these people. Oh, no. They’re professionals; they gave their souls to the Muse, willingly and gratefully. Once they hit upon a creative idea, they’re forced to prosecute it to the very end. And so they found themselves spending (Days? Weeks? Years?) working out how to make the accompaniment from “Within You Without You” fit with “I Saw Mommy Kissing Santa Claus.”

I have to imagine that when they finally figured out (on their very last day in the studio) that the thumpy-thumpy-thumpy beat of “Frosty The Snowman” would work quite well with “Getting Better All The Time” everybody leaped up and threw papers in the air and hugged each other and lit cigars, and overall they behaved like the Mission Control people did when the crew of Apollo 13 splashed down safely.

Not all of the songs on this album are gold. Most of them will have exactly the desired effect on the people at your party, shopping at your store, or riding in your car. They’ll instantly recognize the holiday classic. Their brains will want to click the song into the background, but then they’ll sort of recognize something else that’s going on. And then watch and behold, as their expressions mirror those of a Final Jeopardy contestant who was about to write “What is the Po?” but who now can’t remember if that’s an Asian river.

(Expect a phone call later that day. Have the name of the Beatles song ready.)

A tip of the hat to my BFF John. His annual mix tape (now CD) is as integral to the Ihnatko Christmas as the airing of that Hershey’s Kisses commercial where the candies are rung like tiny bells. Which is to say: completely. “St. Nick’s Lonely Christmas Band” was one of the 12 groups represented on this year’s 24-track selection of holiday wonderment.

Listen to “Santa Claus Is Coming To Town” on Amazon MP3.

As always, my Amazon Associates ID is embedded in that link. Any purchases you make after clicking it will result in a small but valued kickback in the form of Amazon gift credits. I shall spend them lavishly, selfishly, and foolishly.