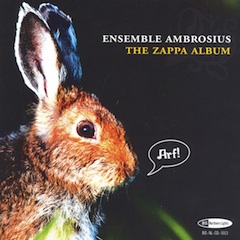 First, that Frank Zappa was manifestly a composer. He was destined to spend his life hunched over a clavichord, a quill in his hand, sheets of foolscap under his quill pen, and a bottle of claret within reach. The fact that Zappa was born a couple of centuries too late to be a contemporary of Mozart didn’t deter him in the least. He was a man of drive and determination: he simply made do with the meager tools that were at his disposal in the 1960’s, 70’s, and 80’s.

I’m fumbling for a way to explain the statement “Clearly, he was a composer.” Well, duh: Zappa squeezed all of those tunes out of his head and into a form that could be filed with the Copyright Office. But somehow, you don’t think of (say) the person who wrote “I’m Too Sexy (For This Song)” as a Composer. You think of him as a “Songwriter.” Maybe as “That weird bald valet guy who wouldn’t stop talking about this hit song he says he wrote twenty years ago, and who almost made me miss my plane.”

Zappa? Oh, absolutely. He was laying down a blueprint for a musical work that was designed to be played live by a great many different groups for centuries to come. This music has layers, it has textures; it’s in no way tethered to the times in which it was created. It was originally composed and performed on a Synclavier and (if Wikipedia is to be believed…for Heaven’s sake, why shouldn’t it?) Zappa pretty much assumed that it was so complex that it could never be performed live, by actual humans.

Hah! Well, here’s a semi-famous orchestral interpretation of “G-Spot Tornado,” conducted by The Man himself. The choreography is by Human Steps.

In fact, the composition is so ambitious that the Amazon MP3 Store lists three different orchestral and baroque arrangements. There’s even a whole band that named itself after this song…with something like two dozen tracks available for download.

Which brings us to Point Two: withholding your catalogue from digital download stores almost never works out well for the Artist’s legacy. The Amazon MP3 Store and iTunes can sell you these weird renditions of “G-Spot Tornado,” but they can’t sell you the Zappa’s original recording, or any other track from 1986’s “Jazz From Hell.”

If you want the Zappa version, you’ll have to buy the CD from Amazon or wherever. But that’s certainly not how people discover new music these days, is it? We come across these things in blog posts and in YouTube videos. We get the itch, we spend 99 cents (or, ugh. $1.29) and we hear the full track. After one or more trips to the download well, maybe we’ll buy the whole CD.

But ordering the disc sight-unseen? And then having it…couriered over? How disgustingly analog! And even if you’re OK with waiting a couple of days to get it, should you gamble $13 on the basis of a single track that you might not even like?

Answer: yes. “Jazz From Hell” is an awesome album. But that’s not the point. The point is that we’re being forced to buy our Zappa via the same mechanism we used way back in the (goddamn) Nineties, when “Full House” was still on the air and they let Pauly Shore make movies. Let’s not go back to those dark and wicked days.

If much of the Zappa catalogue isn’t available on iTunes or Amazon, then that’s obviously the result of a deliberate choice and not a clerical error. It’s also a damned shame. Every time I hear of a high-profile artist whose work is unavailable for (legal) download, I respect that artist’s choice but I wonder if they aren’t overlooking the simple need to keep their music alive for future generations.

I mean, The Beatles could afford to take that risk. There was never any real chance of The Beatles’ “Revolver” ever being forgotten. But nearly twenty years after Zappa’s death, one of the most exciting composers of the late Twentieth century is in danger of becoming just a familiar name, instead of living on as an exciting list of familiar tunes.

Oh, wait…it’s even worse: it’s entirely possible that the very last Zappa tune to fade from memory will be his greatest popular hit. I still cringe whenever I hear a late, great actor listed as “Raul (‘Street Fighter’) Julia.” What a terrible shame it would be for our cultural consciousness if one day Frank Zappa was remembered mostly for “Valley Girl.”

And why? Only because there wasn’t enough of Zappa’s work to go around. With every year, the lesson becomes more clear: if you keep your music out of the iTunes Store or Amazon MP3, it can only mean that keeping these tracks alive is something less than your #1 priority.

As always, all Amazon music links are embedded with my Amazon Associates code. If you click it, any Amazon purchases you make during that session will result in a small kickback to me in the form of Amazon gift credits…which I shall spend foolishly and lavishly on things I’ll enjoy.