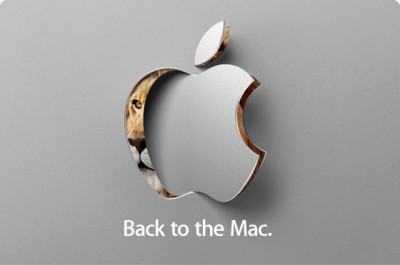 We’ve all been navigating the question “iPhone. iPad. Apple TV. When will Apple have any real Mac news?”

Aha. Well, I just got an invite to another Apple media event next Wednesday. This one is on the Apple campus, which would mark it as a smaller event than the recent ones in downtown SF.

What will they talk about? Well, you can see a lion peeking out from behind the logo there. Soo…

IT’S A TRAP!!! APPLE HAS TRANSFORMED TOWN HALL INTO A ROMAN ARENA OF BLOODSPORT!!!!!!!!!!! JOURNALISTS AND ANALYSTS BEWARE!!!!!

Or maybe we’ll get to see the next version of the OS. The fact that there’s a cat involved settles an issue that I’d been puzzling over for a few months. I wondered if Apple might sit out the next year or so and make the next release of Mac OS X a truly revolutionary 11.0. Sticking to the traditional feline theme suggests that we’ll see a 10.7 that simply builds upon Snow Leopard.

It’s hard to predict what the new OS will contain. FaceTime integration into iChat is a good guess. Overall, you should be looking for features that tie the whole product line together, such as AirPlay, and ways of integrating the Mac OS file system into mobile devices. Apple’s been building the Death Star for quite some time — aka that huge new data center in North Carolina — so honestly, any guess that would require massive storage and infrastructure seems possible.

I’ve always thought that Apple had all of the components necessary for truly device-independent computing. Today, I can start a column, head off to the coffeeshop with my iPad, finish my draft, and then give it a final read through and edit on my iPhone while I’m waiting for an oil change…all because I use a Dropbox folder for storage. Elevate that to the OS level and you have some idea of what I can imagine.

We’ll know for sure next week. I’ll be attending if I can find an underwriter for the trip.