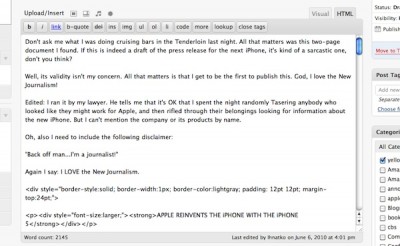 I’ve just written a 2000-word post that I think is good, funny stuff. I have rewritten it and edited it. I don’t know that it’s brilliant, but it’s something I’m happy with.

Annnnnd now I’ve filed it away for good.

See, the problem is that it’s a parody of an Apple press release for the next iPhone. Shortly after I woke up this morning, I had a picture in my mind of someone at Apple getting sick and tired of all of the complaints about the iPhone and finally saying what’s on his or her mind.

So I started writing.

All writing is a selfish act. You write for your own pleasure. You write because you’ve teased out the first thread of an idea and you can’t help but to pull on that thread carefully and see how far it goes.

On that basis: those two or three hours were well-spent.

Why not? Because every time I’ve written a parody, I’ve exercised a lot of common sense. “Make sure that nobody could possibly confuse this for the real thing,” I determined. And then through a second draft and then a third draft, I undermine the credibility as far as I think I can stretch it without explicitly writing “By the way, this is just something I made up. It’s a bit of fun and nothing more.”

I post or publish the piece, thinking that nothing can possibly go wrong. Annnnnd then it all goes horribly wrong.

Oh, it’s not your intelligence that concerns me, dear reader. It’s the intelligence of the Dumbest Person On The Internet.

Aha. Yes, now you see my problem. This Dumbest Person On The Internet goes and puts excerpts on their blog, or Twitters a quote or two. And then it’s allll over the internet that [topic redacted]. Which is obvious rubbish within the context of the original piece, but it has a certain vague credibility when taken out of context.

Plus, I keep forgetting that there are some people out there who think I’m some kind of respected journalist. I can’t say whether that’s deserved or not, but still: put rubbish on the right plate and some people will consider it Haute Cuisine.

23 thoughts on “Safety In Numbness”