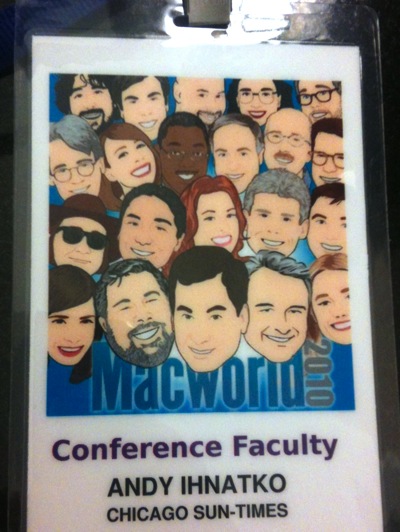 Behold, the Conference Faculty badge for Macworld Expo 2010, featuring a whole mess of speaker portraits, faithfully and articulately executed by Nitrozac of “Joy Of Tech” fame.

My second reaction: “I wonder if I’m on there…”

My third reaction: “Yes I am. Specifically, ‘Yes, you are a loser for immediately looking to see if you’re on there’.”

My fourth reaction: “It sort of looks like someone decided to record a version of ‘We Are The World’ with Mac personalities.”

My fifth reaction: “I’m not in the first row, but I’m in the second row. I wonder how that might correlate, vis a vis the musicians who did the original ‘We Are The World’?”

I’m perfectly aware that I’m not Bruce Springsteen or Ray Charles. Still, it’s a fair question. Even more so when you realize that there are 21 people on the badge and (according to Wikipedia) 22 soloists on that record:

I think so long as I’m not Kim Carnes or Kenny Loggins, I could walk with my head held high.

The difficulties emerge if you open the field to everybody who sang in the chorus on that track:

I’m sure you spotted the problem: yes, holy jumping Moses that’s a whole ****load of Jacksons in there, huh? It’s like a Wheel Of Fortune in which every fourth or fifth slot is “BANKRUPT.” The only smart move is not to even play. Being compared with Michael Jackson is kind of okay. Do let us acknowledge that the man was profoundly talented. But if were said to be “the Mac community’s equivalent of” any of the others, then that’d be the end of my career.

(Not because of any kind of shame. Because I’d become known as “that columnist who killed that guy who compared him to Tito Jackson.” It’s hard to bounce back from that kind of PR.)

23 thoughts on “We Are The Macworld”