I’m the sort of well-centered, confident man who has no problems admitting it when he’s wrong. Which is particularly easy for me today, because I’m admitting that I was wrong before when I told myself that I was wrong.

“Why am I leaving so bloody early?” I moaned on Monday, as I stuffed socks and underthings into my bag. “Macworld doesn’t start until Thursday. I have nothing scheduled until Wednesday night. At this very moment, I could be doing anything else.“

And when I’m spending the evening closing my office for the week and packing for a trip, “anything else” is a savory alternative. Waterboarding wouldn’t be a dealbreaker. I know from repeated experience how bad a packing day is. I can only guess at how bad it might be to get strapped to a table and have water poured on my face to simulate drowning.

(My eye is also being drawn to the words “might” and “simulate.”)

Well, I’m here. It’s another visit to the Reality Distortion Field…not Steve Jobs’, of course, because Apple is having nothing to do with Macworld Expo this year. But it’s still going to be a week in which normal rules do not apply. It’s a week to tell little stories that give the world an entirely incorrect impression of my level of fame, to name but one example. As I settled into my window seat and enjoyed my final few minutes of Internet access before a six-hour blackout…

(I was on a JetBlue plane with in-flight WiFi. But I had already drunk four Old Fashioneds in the bar near the gate and had purchased enough whiskey at the duty-free shop to ensure that whatever I did on top of the beverage-service cart during the middle of the flight, I wouldn’t be able to testify as to my recollections later on.)

…I made a routine dip into Twitter. I tapped the “@Mentions” button and saw this: 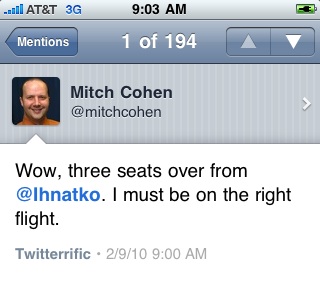 I turned to my right, spotted someone who looked like that, and said hi.

(Nice chappie. I was impressed when he pulled out a graphic novel adaptation of “Fahrenheit 451” as his in-flight reading. I was reading comics on my iPhone but though I won more Nerd Points, Mitch burned far fewer calories scrolling and zooming than I did.)

No, I’m not famous by any rational definition of the term. But Macworld Expo is a bad week for me to leave an inadequate tip…and I also know that if I were to break into a bank with a loaded gun under the mistaken impression that it was my home, it would definitely be noted.

It’s also a week in which I get to pretend to have a lush and fulfilling social life. I had a fantastic meal with a good friend last night, and that’ll be the score for the next several days. And then there’s the sitcom-like nature of street interactions. Walking through a busy downtown and happening to bump into folks you know only happens in “Seinfeld,” “Frasier,” and “The Streets Of San Francisco (During Macworld Expo).” I bumped into Jeff Carlson and Those Lovely Engsts on my way to dinner and had what I’m sure will be the first of roughly a million chats this week.

Plans for today: a lunch meeting, followed by Idle Strolling with a view towards purchasing comics, and then dinner with another good pal.