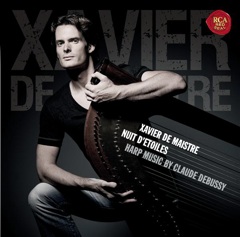 Actually, first I’ll be derisively skeptical. Then you’ll send me links, and then I’ll either tell you that you’re a lying liar who lies, or I’ll fall over myself in gratitude. Because even after hearing “Mélodies” in nonstop rotation for 31 days, I can’t imagine anything topping it.

It’s one singer, accompanied by one instrument. In such situations, excellence is assured if that one singer is the utterly celestial Diana Damrau.

The phrase “I would marry this woman” is banded about so lightly these days, by both the commentators who are fumbling for a dramatic way of communicating “I like her work, sure” and by barking-mad people of whom nothing more should be said. So I feel the need to stress that when I say this, I do so harmlessly and with the utmost level of respect and admiration.

I am merely imagining a scenario in which I’m somewhere in the cheap seats at the Met, waiting for the curtain to go up on a sold-out production of “The Barber Of Seville,” when the director of the opera company nervously steps out and clears his throat.

“We have an emergency backstage,” he announces. “Is there an unmarried, heterosexual man in the house?”

A few hundred hands go up.

One hand remains. An usher fetches me from the fifth balcony and I’m rushed to Diana Damrau’s dressing room, where she’s in full costume and makeup as Rosina and looking at me with hopeful eyes.

“Our star’s visa has expired,” her manager explains. “The only way she can stay in the country for the remainder of the production’s run is for her to marry a US citizen. Can you help us out? Kenny (Kenny. Kenny! Front and center!) here is an ordained minister and can take care of it right here and now. We’d just need a few photos of the ‘service’ to show the INS and maybe if you could stay in New York long enough to be photographed by paparazzi dropping off Ms. Damrau’s dry cleaning, that’d also be a big help.”

I would say YES so quickly that the director wouldn’t even bother offering to move me up to the third-balcony, as he’d originally planned.

That’s all I mean when I say “I would marry this woman.” You see? That’s not creepy at all, is it?

And who knows where that could lead? Maybe she’s been having a problem syncing her iPhone. I fix it during the intermission. She likes the cut of my jib. She offers to buy me lunch as a thank-you. A relationship develops. We wind up touring the world together, ostensibly to throw the INS off the scent. And by the end of the tour, I have learned how people say “Wow! She married…that?” in eleven languages and dialects.

(This completes your tour of Andy Ihnatko’s Fantasy Adventure Kingdom. Please step carefully when alighting from the boat. Souvenir photos of yourself and your fellow guests as you plunged down the horrifying Flume Of Delusion are available at the gift shop as you exit the attraction.)

Buuut seriously. Are there many performers left on your “I buy the physical CD, unheard, as soon as I learn it exists” list? Diana Damrau is a fixture of mine. Every “superstar” soprano is technically-proficient but few (I wrote “none” but wimped out at the last second) seem to have Damrau’s talent for infusing her performances with such color, character, and passion.

Mrs. Ihna…er, Ms. Damrau has a brand-new CD: “Coloraturas.” It won’t be available in the US until January 12. I could pay double and buy it from Amazon.co.uk. Boy, am I tempted. I keep repeating to myself “My strength is as the strength of ten for my soul is pure” and other such nonsense.

Fortunately, while poking around for hard information on the US release date, I unearthed this track. It’ll tide me over quite nicely until January.

I know nothing about harpist Xavier de Maistre, apart from the fact that he’s another example of the sad trend of popular classical music where it’s not enough to be a virtuoso…you also have to achieve a minimal level of hawt-ness for the CD cover. I do know that he’s sensible enough to bring in Diana Damrau to sing on one of his tracks. That’s a hell of a positive. If that’s the only thing I knew about any one of the five candidates running for a seat on my local school board, I’d mark my ballot with serene confidence.

The harp is a fine instrument as an accompaniment to Ms. Damrau. I’ve heard her sing with the full force of vocal fury available to her and I’m pretty sure that she could hold her own against a bagpipe. A harp is a better choice, though. It’s delicate and respectful by its nature, and it leaves lots of “air” in the recording for her performance to move around in. The cumulative effect here is tranquility without a hint of tranquilization, joy without treacle, and above all beauty, beauty, beauty.

And I’m also very pleased that I happen to be offering a harp tune right after recommending one by Groucho Marx. Wouldn’t you?