VAGUE SPOILERS AHEAD: “Let The Right One In” is probably a good movie to go in and see without any advance knowledge of the subject. 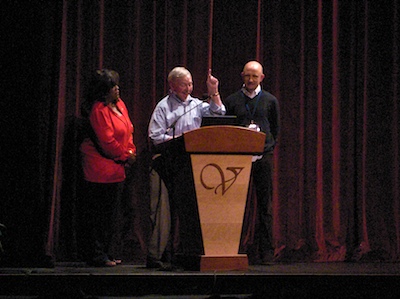 Photo: Chaz and Roger Ebert introduce Carl Molinder, the producer of “Let The Right One In.”

Just when you think that horror is dead and that vampire movies are deader than undead, along comes “Let The Right One In.” This movie restored my childlike faith in a perfect world populated by unstoppable, remorseless mockeries of all of God’s creations.

True horror is inescapable. I exit the theater and (goddamn it) I’m in a world that’s not different enough from the one I just left. Any kid in a stroller I see on the way to my car could be Rosemary’s Baby.

Doubly-creepy: a happy ending. We know better, of course, but we can’t rap on the screen in the final shot of “Let The Right One In” and tell Oskar, a middle-schooler who from his limited perspective has been given everything a bullied adolescent could ever hope for, that he’s completely screwed.

In fact, “Let The Right One In” is probably less about vampires than it is about adolescence. You feel like you don’t fit in; you give up on acceptance and hope to find someone to be alone with. The other kids at school treat you like crap; you give up on trying to understand them, or learning to at least somehow share a school with the little bastards, and instead pray for them to be torn apart by a wild animal. Instead of trying to understand the world, you build a smaller world around yourself in which you feel as though you have more control.

If a vampire does not move next door, chances are excellent that you’ll learn all of the skills you need in order to become a functioning adult with a full range of skills and options for these problems.

If a vampire (apparently) your age does move next door…things get complicated. You now have someone to hang out with late at night. Bonus: he introduces himself to you with a slick, emo line like “We can’t be friends.” He trusts you with secrets, makes you feel normal, and the big bonus is that your comeuppance against the school bullies is far more immediate, tangible, satisfying, and profoundly bloody than simply showing up at your ten-year reunion with a better career and more hair.

Oskar gets his happy ending. At the start of the movie, he’s a latchkey kid who’s persecuted relentlessly at school and mostly left to himself by divorced parents who don’t seem to have any time for home. His life is so devoid of hope that his one major hobby is playing with knives. By the end, he’s running away from home with his new best friend, his “steady,” in a lightproof box next to him on the train.

He’s joyful for probably the first time in the whole movie. But he’s missed an important point about relationships with vampires. If a vampire tries to avoid drawing you too closely into his life, he’s your friend. If you only learned he was a vampire after he accepted your offer to become blood brothers and then you started to look at people’s throats with a new kind of interest, then he wants to share eternity with you.

As creepy and bloody as the rest of the movie is, “Let The Right One In”‘s ending tops it all. Fifty years later, Oskar will be the creepy old man living with the twelve-year-old boy, whose role is to go out alone at night with a black leather bag and an empty gallon jug and not come back until his hands are bloody and the jug is full.

The third way to truly creep me out? Make me feel respect or even sympathy for evil people. You can’t condone Hannibal Lecter’s actions, not when he rips a prison guard’s face off and wears it like a mask, no, not one tiny bit. But you respect him. And there’s something about Eli the vampire, stuck at 12 years old forever, that evokes pity. This is no dignified, stately Count. It’s essentially an unbathed parentless kid with no fixed home and no real future, apart from limitless time.

I truly feel sorry for Eli, even knowing what he’s done to about eight people in the movie and what sort of life to which he’s selfishly doomed poor Oskar. It seems as though Eli is stuck at age 12 in both body and emotional development. I can think of no worse hell than spending 200 years with the same limited understanding of the world and skills for getting by that I had when I was in junior high.

Note: “Let The Right One In” is not to be confused with the 2000 Jonathan Lipnicki film, “The Little Vampire. (Trailer) 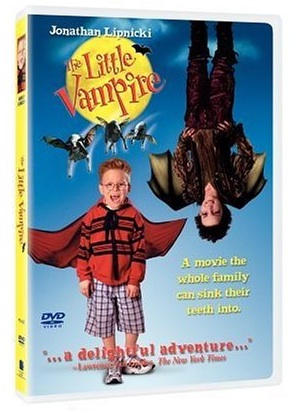 16 thoughts on “EbertFest: “Let The Right One In””