Testing out the latest version of the ScribeFire plugin for Firefox. It’s been so long since I’ve had a functioning blog that I probably need to check the current state of posting tools. I didn’t like ScribeFire much back in the spring, but hey, maybe it’s moved forward since then.

Or maybe not. See this? 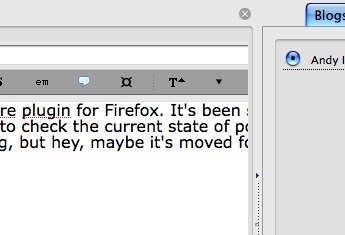 That’s the righthand edge of the editing window.

As you can see by this published post, I didn’t type paragraphs that end with “state of p” or “it’s moved f.” ScribeFire isn’t aware that the text editing pane of the browser window isn’t as wide as the window itself. And while it did give me an unnecessary horizontal scroller under the panel of server buttons to the right of the editing area, there’s no scroller here, where it’s actually needed.

Oooookay: let’s see if inserting the screengrab is a pleasant experience.

So the good news: inserting the picture was as easy as clicking the right tool in the editing toolbar and then picking it from my local filesystem.

The bad news: the right tool wasn’t visible. Because, once again, ScribeFire was unaware of how wide the editing area was at the time. I had to click the separator between the editor and the server panel to make the latter disappear graciously.

They shouldn’t have made made the server panel visible by default. That’s the quick fix. But honestly, ScribeFire has greater power to look within its own soul than I do. It really ought to just know that the server panel is visible, and adjust the editor accordingly.

The really bad news: the editing cursor disappeared after I placed the picture. No blinking upright showing me where the next bit of typing is going to land.

The sight of Flickr and YouTube tools in the toolbar does warm my Grinchy little heart, though. Let’s take ’em for a spin, shall we? Can there be such as thing as TOO many Princess Leia In Sailbarge Slave Costume? This question was asked and answered at Dragon*Con; that answer is, I hope you’ll agree, No.

The caption was written within the Flickr posting tool. More shoddy workmanship: the editing field is a single line, and it isn’t even tall enough to contain that.

It’s also too bad that the only real treat here is that you can search for all photos tagged with a certain keyword. I wish it were sophisticated enough to show you your own most recent photos. Not a terribly sophisticated offering.

But hey! Slave Leia times fifty! That really takes the edge off of it.

Hmm! Same basic deal as with the Flickr tool: search for keywords and ScribeFire will show you results. But YouTube tool’s caption area is actually taller than ten pixels high, so it’s actually useful. I wonder why there was no cross-pollination between these two builds?

Same basic reaction as with the Flickr tool: I sort of think the caption ought to be formatted differently by default. As-is, it isn’t really a caption. It’s just a paragraph of text. And if I’d written it in the main editor, I would have had all of these neat formatting tools available.

Hey, cool…the cursor is back. Welcome back, li’l fella. You were missed.

Now let’s just center those two elements. Flickr photo: no problem. YouTube: there appears to be no way to select that content. Every time I click it, the video plays. Every time I try to drag-select, nothing happens. So I’m stumped.

I think I’m about done here. I ought to link to ScribeFire’s webpage. Select the phrase, click the link tool…

Hmm. All I get is a common, JavaScript-ey dropdown. Type in the URL.

Yeah, once again I’m shaking my head. I’ve no idea why the ScribeFire team doesn’t exploit the natural intimacy between a blog editor that works as a browser plugin, and the other content being viewed within that browser.

The link tool for my AppleScript blog editor worked exactly the same way…at first. It takes no time whatsoever to bash a provided URL into a HTML link. But fifteen minutes later, I expanded the tool to automatically provide a scrolling list of every website that was currently open (plus the lame “type the URL here” box).

ScribeFire’s site is in a window just behind this editing window. How did I make a link to www.scribefire.com? I copied it into ScribeFire by eye.

The first time I wrote about ScribeFire, I complained — fairly or unfairly — that the most obvious feature seemed to be missing. When you click the little yellow Edit button that ScribeFire adds to every single Firefox window, the window splits into two panes. The ScribeFire environment sits at the bottom. The webpage you were viewing remains at the top: 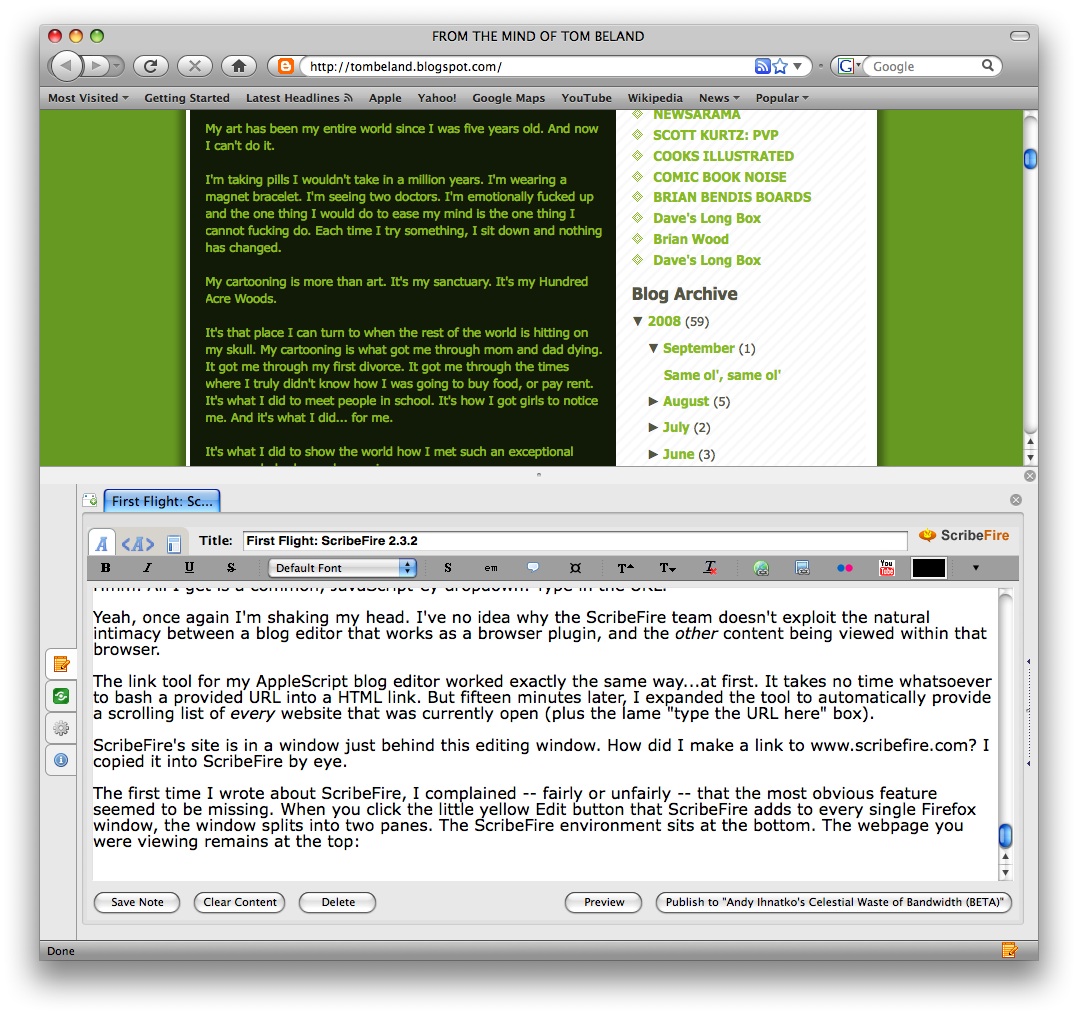 What does this layout imply to you?

To me, it implies that ScribeFire must be the most awesome tool for writing posts that reference other webpages. It isn’t.

Copy and paste? Sure:

My art has been my entire world since I was five years old. And now I can’t do it.

I’m
taking pills I wouldn’t take in a million years. I’m wearing a magnet
bracelet. I’m seeing two doctors. I’m emotionally fucked up and the one
thing I would do to ease my mind is the one thing I cannot fucking do.
Each time I try something, I sit down and nothing has changed.

My cartooning is more than art. It’s my sanctuary. It’s my Hundred Acre Woods.

But where’s the button that automatically generates a link to the page? Grab the title from the window title, use the URL as the link, and paste that HTML down at the insertion point.

(Er…well, yes: that’s precisely how CWOBber did it. But honestly, the purpose of this post isn’t to point out that the features of an AppleScript blogging app are better than ScribeFire’s. That’s just a flattering side-benefit.)

(added: Actually, it does something close. See comments. Mea culpa.)

How about the ability to generate a JPEG out of the bit of the site I’m viewing at the moment?

Hmm. ScribeFire has improved since…when did I first try it out? December? But I still just don’t get it.

I know that there are plenty of folks who relate to Firefox as a “total operational environment” instead of as a web browser. I’m not one of those people. For the life of me, I don’t know why someone would favor ScribeFire over a standalone app.

Which is a damned shame. Because if it really exploited the potential of a browser-based blog editor — wait, I’m going to color and boldface that — I’d use it every single day. It’d make me a more prolific blogger.