A heartening array of responses to the first draft of my business cards, sensation-seekers…many thanks. There were a wide variety of reactions and I can confidently acknowledge that all of them are spot-on. Particularly:

“Awesome…this is totally you.” Cool. This is a major design goal. Speaking about “the Ihnatko brand” without adding implicit air-quotes gives me diaper rash, honest to God. But the fact remains that I do have a brand. My business is based on being the only person in the world who can deliver an Andy Ihnatko-ey sort of style and perspective on a topic, as opposed to one of a thousand who could list all of the ways you can boldface a word on a webpage…so it’s important that my business card duly represents my peculiar form of fabulosity.

“Are you sure that this is a professional-looking business card?” Which is a good point. You can get so creative that your business card looks like an arts-and-crafts project. You don’t want your overall design statement to be “Wow! Look what happens when I click on this button…Golly!”

I do have some extra freedom thanks to the circumstances under which someone gets my business card. It’s almost never “Why don’t you call me on Monday? I think I can convince you that IhnatCorp is Mullet County’s most competitive and comprehensive solution for roadkill removal and disposal.” By the time cards are swapped, the transaction’s more or less locked. Either the company has agreed to mail me some hardware for review, or an editor/producer/conference organizer and I have decided that we want to work together. It’s just a matter of making sure they know how to reach me.

“That’s totally not going to get lost in a pocketful of business cards.” Another design goal. At the end of a four-day conference, I have this huge stack of other people’s cards. Sometimes, the reason why LambadaWare’s software gets reviewed a month before DiscoSoft’s is because Lambada’s card had a bright orange back and a punch-out of a little dancing guy. As I riffled through my cards on the plane ride home, my eye was drawn to that design. I instantly remembered “Oh, right; they have that really cool new presentation tool” and thought about that open slot on my editorial calendar coming up in a week’s time.

“My eyes didn’t know where to go.” Yup, that’s no good. Graphic design is all about user interface. You can exert a form of mind control over the observer by choosing a layout and color scheme that more or less forces someone to look here, then here, and then make sure that they take in this.

“The background is way too busy.” Right, and that’s just a first go of this. The photo is one of my “standard” portraits, available to folks who need a shot for a conference program or whatever.

I’m sort of waffling on putting my mug on the card. Pluses: I have sort of a unique “look” and so seeing me again on the business card ought to help you remember who I am and what we talked about three days earlier at the trade show; also, we come back to that subject of “branding.” Negative: putting your photo on your business card is the sort of d-baggy, loserish thing that Jerry Lundgaard would do.

If I do it, it’ll be more of a design thing than a photo thing. Which is why I homed in on that particular photo. It’s not a “Hey, look at me!” sort of shot…it’s just sort of an interesting image.

But I agree that it’s sort of a busy background. I softened it a bit by desaturating everything but the eyes in the sculpture, but it’s probably a bit too noisy…even for the back side of the card.

“There’s no space on the back for the recipient to jot down notes.” Very true, but I don’t know how to process that problem. If a business card is going to have two sides, then it has to have a clear Front and Back. If you put too much white on the back, it looks like the front.

This is an open problem and the answer begins with my deciding whether or not I care.

Well, this is why I enjoy graphic design. You don’t slap down your first design and write a check to the print shop. Nope, you keep noodling at it. You work up an idea, decide what you like about it, and carry those elements over to the next design. The stuff that doesn’t work — hell, even the stuff that you’re just not excited about — gets left behind.

I like the phonetic spelling of my name. That’s a nice little graphical element (and a useful one). That stays. Here’s the next evolution of that first design: 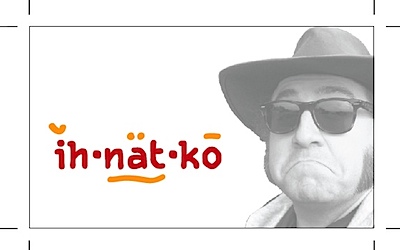 You immediately see the results of a few decisions: I like the phonetic thing as a design element, so it’s bigger and more prominent. Plenty of white space so someone can jot down “Remove this person from the contact lists on all future press events,” etc. And the background has been reduced to just my portrait, which in the printed version would look a shade or two lighter than it does on your screen.

If this design makes it to the next round, I’ll prolly wind up shooting a new photo specifically for the card. Same sort of shot, different expression. And wearing sunglasses in a promotional photo seems kinda…well, I don’t want to say because if I say it, someone will send me a photo of one of my favorite authors wearing sunglasses in a promotional photo.

But I’m still firmly in “screwing around with ideas” mode. Here’s something I whipped up for fun the other night: 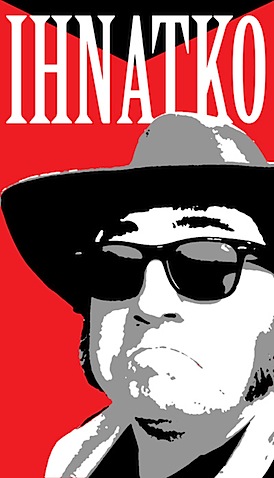 I like it a hell of a lot. Yup, it’s a “quote” of the classic Marlboro Man design. But this wouldn’t look out of place as a sticker on a guitar case backstage at a Lansdowne Street club in 1988, either.

This is a relatively quick-and-dirty implementation. If this went forward, I’d smooth out a lot of those shapes to make it look like vector art (even though this was a fairly simple Photoshop job). The trouble with this design is that any thoughts of using a cheap “100 business cards for $30” service goes RIGHT out the window. It’d only work as a process color job, where I hand the printer three separations (one piece for each of the three colors) and pray to God that it traps out properly. It’s v.tricky to have the grey butt up against the red without winding up with some sort of halo between the two areas. Either the two separations don’t register properly, or you “trap” it wrong and the grey and red bleed into each other a little, resulting in a maroon sort of outline.

Maybe I’ll do this as vinyl stickers. Do guitar players read my stuff? Are they willing to pay $24 per sticker, to make sure I come out even? Or $42 per, so I can maybe finally buy myself the “Calvin & Hobbes” omnibus?

Onward and upward. Admittedly I’ve tanked my original goal of placing an order for new business cards 48 hours after pulling the ripcord on Adobe Illustrator, but with any luck, by the time I settle on a design I’ll have left the business entirely and the problem will have solved itself.

22 thoughts on “The Business”