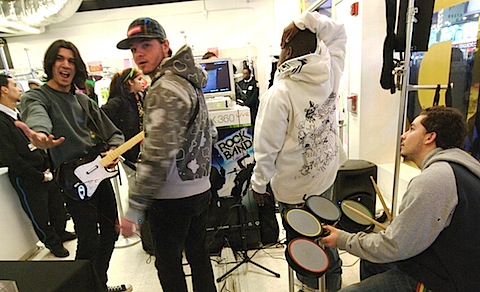 When it comes to electronic gaming, I feel like the only diabetic at the cruise’s Midnight Chocolate Buffet. I don’t own a game system. But my social circle is indeed precisely in the gaming demographic and rare is the time when I visit a friend’s house and see only one game console on Pause.

Actually, it’s less like being a diabetic and more like being the only sober one at a frat party. You see things, man. Scary things, drawn from the book of Apocalypse; the glazed expression of a woman who’s still seeing a planet-sized ball of rolled-up junk; the slightly slack jaw of a man who’s always looking for an open receiver; the weak handshake that says that this person left the last of his grip strength somewhere in a bombed-out French hamlet in Virtual 1942. The games change, but the symptoms never do.

(Ihnatko takes his hands off the keyboard, theatrically mimes the act of furious 110 words-per-minute typing, then returns hands to keyboard)

…and if I spent eight hours a day with a game controller in my hands, I’d need to buy either a voice-to-text system or a helper monkey to take the place of my clublike hands. Plus, I already feel guilty enough about all of the photos that I’ve shot but haven’t edited, and all of the notes and ideas I’ve made for stories that I haven’t written. I’ll feel much better if I put those hours into creative endeavors.

Let’s not overlook the fact that a game system is a $299 expense that begets endless $60 expenses. When I create stuff, it tends to be revenue-neutral or even a revenue-positive exercise.

But watching gamers from the sidelines can be alternatively entertaining and shocking. “Rock Band” is the disease currently decimating my community. Like “Guitar Hero,” it seems awesomely fun.

It is also like “Guitar Hero” in the sense that if you keep playing it, you’ll eventually turn into Gollum.

I have been observing my friends’ Flickr feeds with increasing alarm. The first photo of my friend playing “Rock Band” appears on or about the date of purchase. Over the coming weeks, more and more photos are posted, until it’s simply not possible to photograph my friend without a Rock Band controller in his or her hands.

Then their hair becomes longer and stringier, their skin gets paler and paler, their faces more gaunt and haggard. Hygiene is the first to go. Then, access to sunlight. Finally, even basic nutrition is sacrificed to the great golden god, and they subsist solely on food that they can either order in or forage from the cracks between the sofa cushions.

In this way, “Rock Band” is the greatest simulation of the rock star experience imaginable. You wind up looking like Iggy Pop and then you drop dead of multiple unnatural causes by age 32.

Speaking of heroic abuse of your body’s natural neurological and chemical balances, I need to raise some venture capital for a special “The Who: Live At Leeds” expansion pack. Peep these super-doubleplus-awesome features:

The entire double-CD “deluxe” version of the album, including “Tommy” in its entirety. And there’s really no need to read on. If this doesn’t immediately lock down your interest in the project, then it’s possible that you’re not even cool enough to be in a pretend rock band.

Special Keith Moon challenge mode. Your drumming cues “black out” randomly. Then they blink back in, and you have to furiously drum twice as fast to catch up. You can’t hit certain drum pads because they have scary giant purple bats with the mocking face of Carol Burnett on them; when the bats appear, you must use other pads. Game might randomly switch to the cues for a song that you’ve already played during this set; you’re scored on how long it takes you to realize this and make necessary adjustments.

“Showboating” head-to-head challenge play. Each of the four bandmembers tries to add unnecessary riffs and flourishes without missing required notes. The game tracks where the virtual audience’s attention is. Bonus if you attracted the most attention. Double-bonus if you’re playing guitar and you managed to get the singer to score last.

There’ll be a special gold “Amazing Journey” edition for the Wii. The Wiimote will be used for additional compulsory moves which vary from instrument to instrument:

Guitar: Points for windmills between strums; maximum g-force when Wiimote thrown to the ground at the end of “Won’t Get Fooled Again.” Bonus if g-forces are registered upon collision with singer.

Drums: Wiimote worn on head. Points for wobbly loops, for both amplitude and frequency; points do not count if movements correspond in any way with beats in the current song.

Bass: Requires nunchuck. One chuck worn on head, second chuck worn over breastbone. Bonus points for maintaining minimal movement throughout song. Lose turn if either one moves more than 6 inches from their starting location, in any direction.

A note to the Gaming industry: you’ll notice that for your convenience I have brought with me a vinyl-dipped hard-sided American Tourister suitcase. You may now fill it with hundred-dollar bills. I’ll tell you when it’s full.