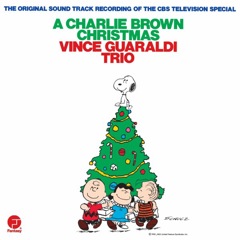 Blah, Blah, Blah: I suppose that on some purist level, your opinion of a piece of music should be based on the track and nothing but the track.

Fine, Poindexter: I acknowledge that you’re a nobler and purer music critic than I. But any of the two or three signature songs from “A Charlie Brown Christmas” puts a big honkin’ smile on my face that lasts long after the music ends.

A song that hooks into your most pleasant memories of childhood has some powerful mojo behind it. This song shows up on Shuffle Play and immediately I hear that slappy, “snare drum falling down a flight of metal stairs” drum riff and I see the word “SPECIAL” whirling in front of a black background. For the nth time in my lifetime, I wonder just what the hell “Dolly Madison Snack Cakes” were, and if there were anything like the fine Twinkies and Suzy-Q’s of the Hostess Corporation.

If “Christmastime Is Here” comes up on my iPod while I’m talking my constitutional, it’s all I can do to not try to ape the sawtooth-like walk of Charlie Brown and Linus. I’ve never heard it while skating, but I’m guessing that I’d start moving in those tight, lazy circles of the kids from the opening scenes.

I haven’t been skating in years. In fact, the last time I was on skates it was at the Redwood Empire Ice Arena, aka Snoopy’s Home Ice in Santa Rosa, California. This is the ice rink next to Charles Schulz’ studio, which he built and operated (at a violent monthly loss) out of his own pocket, just so that the community would have an place to skate.

(And so that Schulz himself would have a place to play hockey with his friends after leaving his studio for the day.)

But apart from these technically irrelevant features, this recording features the immeasurable charm of kids singing like kids. Sometimes I think the best way to destroy a kid’s potential career as a singer is to appreciate that he or she (come on: “she”) sings well. They start teaching her to sing like the current flavor of the month instead of letting her grow into her voice and her talents.

Why I Bought It In The First Place: Another one of those albums that I’ve bought two or three times, on cassette and then CD.

And now, I’ve bought it on iTunes…just so that I’d have the album art for this very feature. I do and I do and I do for you kids…