Hmm. Already I’m liking it less than ecto. Although as I typed that last word I have to give MarsEdit’s developers proper respect for being unafraid to use the “Shift” key when naming a product. Every type I type “ecto” I feel like I’m using an open-source product or something.

Whereas MarsEdit feels like an open-source product when I’m actually writing a blog post with the thing.

I mean, oh dear. Let’s see if I can insert a shot of the editing window so you can see what I mean: 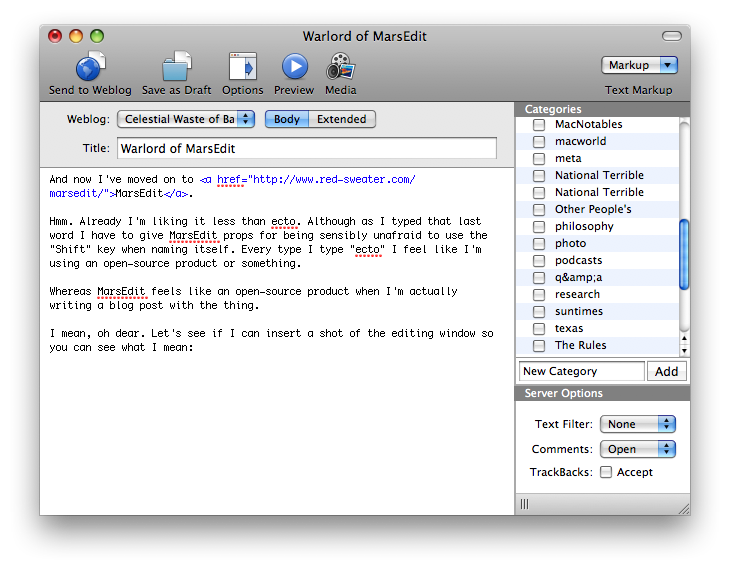 (Note: after posting this, I had to go back in and manually resize the pictures. It was screwing up the layout of the blog.) …And I certainly dig that. But the bad news — I know, I’m violating some sort of rule about nested Good News/Bad News loops; let’s just press on — is that it apparently doesn’t resize these images.

Hmm. The best answer is a hybrid of both ecto and MarsEdit. To put a finer point on it, I want ecto’s approach, with additional support for both Flickr and arbitrary files.

I also want this new solution to do something that neither one can apparently handle: the image should be scaled down to 400 pixels wide, and clicking on the image should open the full-rez version in a new window. I was able to code that up in less than an hour with my old AppleScript blogger. Why is this such a mystery?

But I digress. If you look at the MarsEdit window, you essentially see the exact same thing I used to see when I was using BBEdit as my post editor. There’s a preview window behind it, but why on Earth wouldn’t they support visual editing? They are aware that this is a Mac product, and not something intended for a Sun workstation, right?

And I don’t see a tool for italicizing text. Let’s go look for it…

…Yup, but it’s under the “Post” menu, and not under a “Format” menu, which is a standard Mac UI standard. And of course, it just wraps what you write in HTML tags. Like this. But then after you’ve typed the word you wanted to italicize, you have to move the cursor past the closing tag before you can continue editing.

I command-tab back to ecto. I note that on top of all of the goodies that I already miss, I can easily flip between that rich, visual editor and the actual, raw HTML. Not merely tags, but complex formatting. So it would appear that anything I might want to do (like those iTunes divs) would be a piece of cake.

Even cakier, in fact: ecto allows me to define my own styles.

MarsEdit is nice enough to include an “Edit in BBEdit” command, but for $29, should I really need to have a second app already installed to share the load?

Hmm. This little contest appears to be going to ecto, in an utter blowout. In fact, I’m finding MarsEdit so difficult to like that I wonder if I haven’t simply overlooked a separate user mode. You know…a mode which causes MarsEdit to work the way I’d expect a blog editor to work.

If you folks have anything illuminating to share, then comment away by all means. Keep in mind that I’m literally commenting on what I’m experiencing as I’m creating this blog post. So these are the impressions of someone with just fifteen minutes’ worth of experience with MarsEdit.

But for now…I mean, ick.

16 thoughts on “Warlord of MarsEdit”