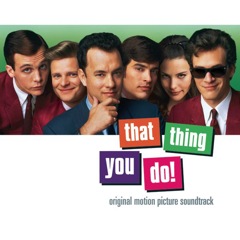 That Thing You Do!

That Thing You Do! (Original Motion Picture Soundtrack)

Blah, Blah, Blah: This song was an absolute lock to win the 1996 Academy Award for Best Original Song. It was precisely the sort of song that the award was meant to honor: a piece that makes such a significant contribution that you couldn’t possibly imagine the movie without it.

“That Thing You Do!” follows the meteoric rise of a local band as a replacement drummer’s impulsive change in tempo transforms a drippy romantic ballad into a monster hit that takes the entire nation by storm. Okay, so the screenplay’s written, the budget is in place, the movie’s been cast, the actors are learning how to fake their way with guitars and drums, and frumpy men and women are fanning out and securing locations. Now all you need to do is to line up that song.

You know…the song that’s catchy on such a Darwinian level that in the space of just a couple of months, The Wonders go from playing a college talent show to playing for thousands of screaming fans and appearing on the nation’s top-rated live network variety program.

(No pressure or anything.)

The movie would have failed completely if this song hadn’t been absolutely perfect. How many other movies have screwed this up? You’re watching a movie about tortured artist for whom depression and addiction are the unbearable price he pays for his God-given gifts. His paintings are works of desperate genius that cause sinners to repent upon first sight, and each new piece sends a struggling world one step further down a road towards Healing. This latest work of his is consuming all of the artist’s energy and passion and he’s so consumed by his Vision that he has shut out the outside world entirely. He is utterly convinced that this is the masterpiece that God called him down to Earth to create…and that once this piece is finished, he will never paint another and he will finally be free to lay down his metaphorical sword and shield.

At the very end of the movie, you finally get to see the actual painting. But despite what everyone in the movie says about it, it’s clearly crap. If you put it up for sale at a local church craft fair, the only way it’d sell would be if you pasted a few felt squares onto it and offered it as a caddy for remote controls.

But “That Thing You Do!” is the real deal. Every year, there’s this one song that you can’t get away from all summer long. You totally believe that this could be one of those songs.

Again: an utter lock for Best Original Song. The winner, of course, was “You Must Love Me” from “Evita.” This outcome was doubly-lame because the song wouldn’t have been written in the first place if any of the songs originally written for the stage musical were eligible for an Academy Award nomination. Apparently, Andrew Lloyd-Webber didn’t want to live in a world in which there was an award or an accolade that he hasn’t won.

In my old age, I refuse to even joke that he should have killed himself rather than compose the song that beat “That Thing You Do!” But I’m still young enough that I checked his Wikipedia page to see if a 1996 Lloyd-Webber suicide might have prevented some future abomination from happening as well.

A “Daddy throws himself onto the floor and beats his feet and fists in the carpet and insists on getting an Oscar nomination for his musical” win isn’t as bad as the Oscar going to a song that only appeared in the movie’s end credits. But add the fact that “You Must Love Me” appeared in a movie that featured Madonna in a dramatic role, and it’s definitely one of those outcomes that encourages you to throw your hands up and stop caring right then and there.

Why I Bought It In The First Place: Another one of those Stimulus-Response things. The year when you’re able to download a Big Mac straight to your notebook anytime the impulse strikes you is the year when my weight and my cholesterol both break 300.

Sample “That Thing You Do!”
on the iTunes Store