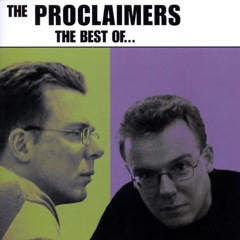 The Best of the Proclaimers

Blah, Blah, Blah: “My, my…Mr. Ihnatko seems to fancy himself as quite the highbrow snooty music expert, doesn’t he? Some of these Advent Calendar blatherings aren’t merely pretentious…they’re downright pretwentytious.”

Okey-doke. To help balance things out, today I present The Proclaimers. Why do I like this song?

Because they have funny foreign voices.

I like to exaggerate their Scottish accents while I sing along:

To find the “sweet spot” for this accent, just keep pushing it up and up and up, further and further into the extreme. Start at Craig Ferguson, move past Billy Connolly, and then work your way through Scrooge McDuck and Groundskeeper Willie. When the accent becomes so extreme that it actually becomes racist, back it down exactly one notch and bang, you’re there.

I think you’ll enjoy the results.

Why I Bought It In The First Place: I know there’s a connection to “Trainspotting.” I’ve just checked IMDB and Wikipedia and was surprised to discover that “500 Miles” isn’t on the soundtrack. I don’t have my DVD handy and I can’t be arsed to screen it again just to check if the song’s actually in there anyway. So I guess after spending an hour and a half listening to Scottish accents that were so thick that X-rays couldn’t penetrate through, it simply got me thinking of these guys again.