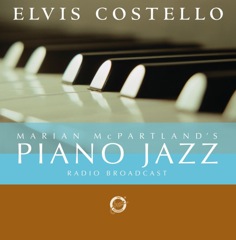 They Didn’t Believe Me

Blah, Blah, Blah: I have such love for songs like these. I’ve also just realized that this track represents several values of “the sort of song I love,” which sort of underscores the reason why it’s become one of the favorites in my Purchased Music playlist.

So, yes: songs with a high level of craftsmanship in how the lyrics are fitted together; recordings that are so confident about the material and the performers that all production artifice is banished from the studio; songs with a great deal of intimacy between the performers and the listener. Absolutely.

But the property that I originally had in mind is the way that the listener knows more about the singer than the singer knows about himself. You don’t just listen to the words…there’s a quality in Elvis Costello’s performance that compels you to truly hear it. And while on the surface this might appear to be a very sweet song…it isn’t. It leaves you convinced that the man singing these words will never, ever find the courage to approach this woman. His worshipful love will always be utterly unexpressed and unrequited. If you listen to other versions of “They Didn’t Believe Me” on the Store, you’ll see that most of them are far more upbeat. But when you listen to this one it’s pretty clear that Elvis got it right and everybody else has gotten it wrong.

Let’s also take a moment to talk about Mr. Elron Costello. As a kid, you’re adventurous and you have relationships will all kinds of bands. That’s just natural. Men Without Hats’ “The Safety Dance” — well, we both knew in that it was just a fun little fling. At least it wasn’t like that one-nighter I had with Dexy’s Midnight Runners, which left me filled with an awkward remorse that I took out into the backyard and then buried someplace very, very deep.

But this thing with Elvis turned out to be a lifelong deal. Yeah, “My Aim In True” came out when I was still in grammar school…but like all Wisdom, I found it when I was ready to accept it into my life. He’s been taking a portion of my annual income ever since.

What a rare career. 90% of all musicians with hit records wind up selling wholesale flooring within five years of leaving the Billboard 100. 5% move on to a sitcom, or some other job that allows them to remain famous without having to spend so much of their year sleeping on a bus five feet away from a chemical toilet and a stoned bass player. 4% stay in the music business, but are content to tour with their Greatest Hits catalogue…or they give up entirely, and record a CD of standards from the American Songbook.

(Which makes complete sense if you’re a virtuoso vocalist like Cyndi Lauper. But Billy Ocean? Mmmm…no.)

Elvis is in that glorious final 1%. Over the past three decades he’s steadily expanded and infiltrated, like radon gas through an old building. Only it’s the kind of radon gas that experiments with new styles and modes, collaborates with all sorts of musicians whom the general public would otherwise have never heard of, and keeps releasing new albums that fit next to each other like successive chapters of a great novel. He’s definitely not the sort of musician who’d give you lung cancer.

It’s easy for a musician to reinvent himself every few years. It gives the illusion of a long and successful career, when in truth, they’re just having a long sequence of short ones, propelled by the strength of their name as a marketing brand. That’s not our Elron. His career is a continuum in which he keeps building on what he’s done before.

Oh, and he hasn’t turned into a complete nutbar in the process, like Prince.

“They Didn’t Believe Me” also demonstrates Elvis’ remarkable (and underappreciated) skills as a vocalist. I’ve had some bitchy fun here at the expense of all those pop stars who record desperate albums of standards years after their creative wells have run dry (along with the public’s interest). So I ought to concede that okay, fine: this tune is from the Jerome Kern catalogue. It’s from a 1915 musical called “The Girl From Utah,” of all things.

But clearly, Elvis isn’t just taking part in some sort of Pop Singer Fantasy Camp here. He has an unconventional voice, true, but what separates a true vocalist from a mere singer is the ability to make deliberate and correct choices about phrasing and presentation. When Rod Stewart sings a classic, he turns it into a Rod Stewart song (albeit one backed by a full orchestra). Elvis can take a semi-forgotten song from a definitively-forgotten musical and turn it into something brand new. This version of “They Didn’t Believe Me” is much bigger and far more powerful than what Kern originally had in mind, I’m sure.

Why I Bought It In The First Place: I was actually hunting for something completely different. I was gonna post about “When I Was Cruel (Part 2),” which I’d already ripped from CD. But I came across a whole bunch of stuff that I’d never seen before while searching for it on the iTunes store…including this track.

So looking to spend 99 cents for an .M4P edition of a track that I already had as an .MP3 wound up costing me something like $21. I already owned the version that Elvis released on “The Juliet Letters,” in which he was backed by a string quartet. This version beats it hollow. The “Juliet” track merely heads off towards the destination that Elvis finally reaches here with Marian McPartland.

Sample “They Didn’t Believe Me”
on the iTunes Store