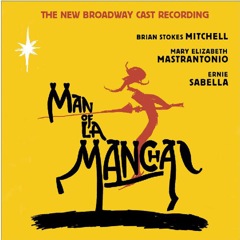 Blah, Blah, Blah: In the year 2007, the concept of a Famous Broadway Star seems like a throwback to the Fifties or something. On some level it’s like someone who’s renowned throughout the land for his goat-shaving skills.

But as a lover of musicals I’m pretty happy that there are still those upper-drawer stars whose name on a marquee pretty much assures that you won’t be able to get a seat for the first month. Brian Stokes Mitchell is one of those people. What a voice! He wasn’t nearly old enough or broken-down enough to play Don Quixote but honestly…who the hell cares? Ernest Borgnine is in the correct age demographic but I’m not the least bit confident that he’d justify a $100 full-price orchestra ticket.

I love this track for all of the sensible reasons (Brian Stokes Mitchell in a classic role) but also because Mr. Mitchell was kind and thoughtful enough to be a baritone, like me.

If only soul legend Sam Cooke had such a generous spirit. Cooke — thinking only of himself — became a tenor, which means that no matter how devoted I may be to the transcendence of “A Change Is Gonna Come,” it’s so far out of my range that the humanitarian in me refuses to inflict my rendition on an audience. Even if that audience consists solely of a bottle of Pert Plus and a vinyl Yoda doll.

But if you’re a baritone, “I, Don Quixote” is right there in the butter zone. If I’m alone in an enclosed space, there’s at least a 3 out of 5 chance that I’ll start singing this. If it’s a room with a lot of echo and reverb, bump that up to 6 out of 7 regardless of circumstance (my apologies, Reverend; by all means, please continue with the service).

It’s a song that invites you to insert lots of sweeping arm gestures into your performance. I quite enjoy that. You should also feel free to occasionally take the occasional dramatic step forward or even to pretend to be riding a horsie. Suffice to say that the tune delivers a lot of value for 99 cents.

“Reasons why I wish I were independently wealthy” is a mighty long list, and most of the top spots are occupied by things like “I wonder what it’d be like to own a car whose body panels are all the same color.” But lower down, there’s the idea that when there’s a new star-packed production of “Man Of La Mancha” I could pop on over to New York and see it. For now, my status as an honest journalist means that I must content myself with the cast albums.

Sample “Man of La Mancha (I, Don Quixote)”
on the iTunes Store