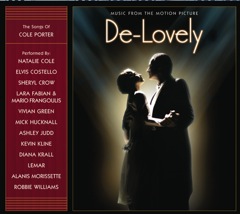 Blah, Blah, Blah: There is such a thing as Ungodly Talent. Cole Porter had it. His songs are like magic tricks that never become mundane. You can play it over and over and over again and listen to it from every conceivable angle but you’ll never figure out just how the hell he did it.

You can listen to “Let’s Do It” just as an ordinary song. Or, you can enjoy the simplicity of the melody; pay attention to how many opportunities the tune presented to the guy writing the arrangements. You can do just about anything to that melody without fear of breaking it.

Sit back and simply enjoy the playfulness of the lyrics. The words snap together like Legos:

In shallow shoals, English Soles do it
Goldfish in the privacy of bowls do it
Let’s do it!
Let’s fall in love!

And of course, there’s the neat trick of being cute and light and yet orbiting around smuttiness at all times. On the surface it’s a sweet little song until you decide that “let’s fall in love” is actually just a euphemism. And then you enjoy it even just a smidge more than you did before.

Writing a song like “Let’s Do It” is like inventing the color orange. Boy, you’ve done something big and lasting. The existential middle-of-the-night question “Just what have I done with my life?” will never be wanting for an answer.

Why I Bought It In The First Place: I think I actually bought this album twice. I got home from the movie and I couldn’t wait for the record stores to open the next morning: I bought the whole album on the iTunes Store. And then a few days later I decided that I wanted to rip high-quality DRM-free tracks from a CD.

“De-Lovely” is a fairly nice movie. Without the musical performances, it’d probably be a 2.5-star flick but the tunes add another star.

This soundtrack could have been a disaster, though. Cole Porter tunes don’t need to be modernized or (God help us all) “fixed.” “Red, Hot + Blue” is a terrific collection of Porter songs, recorded by modern stars. Annie Lennox’ version of “Ev’ry Time We Say Goodbye” is utterly heartbreaking, just as it ought to be. But apparently Aaron Neville thought “In The Still Of The Night” had practically no appeal as-is…but don’t worry, he turned it into a Bossa Nova number. Whew! Thanks, Aaron!

Fortunately, all of the performances in “De-Lovely” are in the basic style of the era in which the songs were written. Based on artists’ interviews it seems like they had an absolute ball recording the tracks and performing them in the film. Lemar is a successful young R&B singer. In the movie, he sings “What Is This Thing Called Love?” in a smashing linen suit, backed by a four-piece jazz band. He has no lines, but he got to spend a couple of days pretending to be a jazz singer of the Thirties entertaining people from the bow of a big gondola.

To hear him tell it, it was like being paid to spend a couple of days in Vocalist Fantasy Camp.

Alanis Morissette makes the ends of her lines go a bit too curly at times, but still, it’s a nice rendition. Like the rest of the tracks, she didn’t try to make it into an Alanis Morissette song.