Amazing. On the last MacBreakWeekly podcast, Chris Breen was introduced as the writer of Macworld’s “Mac 911” Q&A column, which led me to claim to be the author of the magazine’s “Mac 404” column.

“People send me their questions,” I said, “and I don’t answer them.” 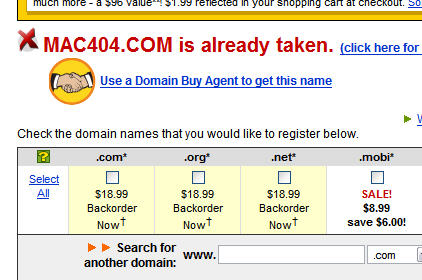 Yes, according to the domain record the show wasn’t online for more than an hour or two before every major domain of Mac404 had been bought…and not all by the same person, either!

When somebody emailed me about this today I did feel an odd involuntary twinge. As soon as you realize that something you never wanted is now unavailable, the reptilian part of your brain kicks in and a few green drops of Regret leak into the cognitive buffer before a maintenance guy dogs down the valve and your good senses return.

But it’s kind of a cool URL and I hope its new owners do something neat with it. Ain’t nothin’ worse than when there’s a great URL like macsforkids.com, and it turns out that the damned thing is just parked somewhere.

I’ve bought a bunch of URLs over the years based on nothing more than an idle whim followed by my surprise that nobody had claimed it already. I wouldn’t even know that I owned ’em except for those kind letters that Register.com sends you when YOUR DOMAIN IS DUE TO EXPIRE! (in 15 months).

I resist the urge to renew. Twenty bucks is twenty bucks, plus I’d hate to break the heart of the man or woman who has the perfect site for ElvisVersusKirk.com.