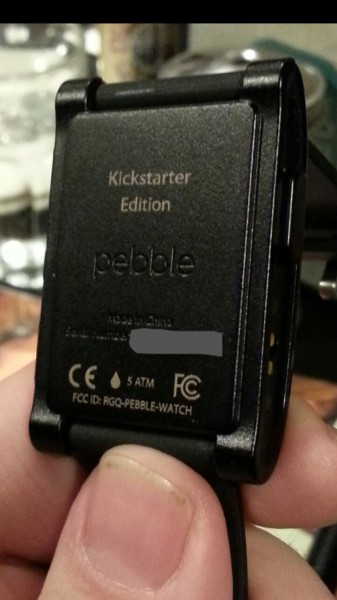 The first-run, Kickstarter edition of the Pebble smartwatch. I’ve obscured the serial number because it’s a pal’s watch.

I finally got a chance to see the Pebble watch, thanks to a friend who had already received his and who wore it to dinner the other night.

Well, how good is the screen, Andy? What’s the interface like? I’ve nothing to say on either topic. In truth, I only had it in my hands for about fifteen minutes, and that’s nowhere near enough experience to offer a comment of any kind of value.

Also: because the battery had already gone flat. The Pebble could only stay awake long enough to say “shaddupMomwannagobacktosleep!” and shut back down again. Yeah, that’s the key thing I’ll be looking at when I get one of my own to review. I liked wearing my iPod Nano as a watch but after the novelty wore off, keeping it charged was a pain.

I’ll have a “real” review of the Pebble sometime. Soon. Maybe. Those bastards at Pebble are being completely mean and stupid and irrational. They’re sending me one for review, but the whole first run is committed to fulfilling their obligations to their Kickstarter backers.

I hate dealing with unprofessional people.

Yes, of course I’m joking. I’m pleased that the company is showing such respect for the folks who supported Pebble and allowed the product to come into existence.

I myself didn’t back the project. I mostly back comics and books and movies, in dollar amounts where I don’t really care if I get something good or not. I’m using my money to say “you’ve got a great idea and I hope you move forward with it.” When I see a $99 gadget on Kickstarter, I think about how bummed I’d be if it didn’t work well. Even if an album isn’t very good, I’ll still get the pleasure of listening to it and experiencing something new. An expensive iPhone case that kills the antenna or a Bluetooth speaker with terrible sound would just make me feel stupid. “Why didn’t I treat myself to a burrito every week for three months instead of buying this?”

If you enjoy burritos, and are often reminding yourself that a home-cooked meal is healthier and much less expensive, these are words that sting.