This hotel room seems to have a Destructo Field Emitter in it somewhere. I’ve had to replace of fix a bunch of my stuff since checking in.

Though maybe my Anker PowerPort 5 USB charger was broken before I left. A couple of its ports stopped working. I’d been skipping around the problem by just treating it like a 3-port charger, but it’s hard to figure out which are the dead ones until you find yourself with a dead phone and watch the next morning.

I did a search for the problem. It turns out that early copies of this thing would have a fit if you used a cheap cable with it and it shoved electrons through the port in an un-ladylike fashion. Anker (supposedly) fixed it with revised hardware.

I could have sent it back, I suppose. But I was looking on their site and found a newer version that has six ports, and is rated at 60 watts instead of 40. And (like all Anker products, it seems) it’s agreeably affordable. Instead, I ordered the upgraded one and had it shipped to my hotel.

It seems to be conducting electricity, which is really all I could ask it to do. I like this sort of device a lot. It travels well and this single thing charges damned-near everything I need during a trip. When it’s not in my suitcase, it’s usually on a sideboard in my house, acting as the central charging station for lost sheep.

True, the first one did crap out on me. I chose to keep trusting Anker because so many of their products have worked so well. As both a consumer and someone who recommends things to consumers, I also like their “produce inexpensive tech that doesn’t look and feel like junk” business plan. It doesn’t seem normal for me reward a defective product by buying more of the same, but human beings are unpredictable.

It got me to thinking: would you rather buy from a company whose products break less frequently than the average firm’s, but their support and customer service is not as good as the average…or a company that has those two things reversed?

As Mac users, we have the best of both worlds. But imagine one laptop maker whose PCs were as well-built as Apple’s, but the customer service was like a typical Windows PC maker. Imagine another maker that builds typical Windows laptops, but their service is as good as Apple’s. Who would you buy from?

Assuming the company with the better service is still making decent hardware…I go for the better service. One terrible customer service experience will put me off a company forever. But a bad experience with a piece of hardware? I’m inclined to chalk that up to life here in Paradise and be grateful that the service person diagnosed and fixed it quickly. 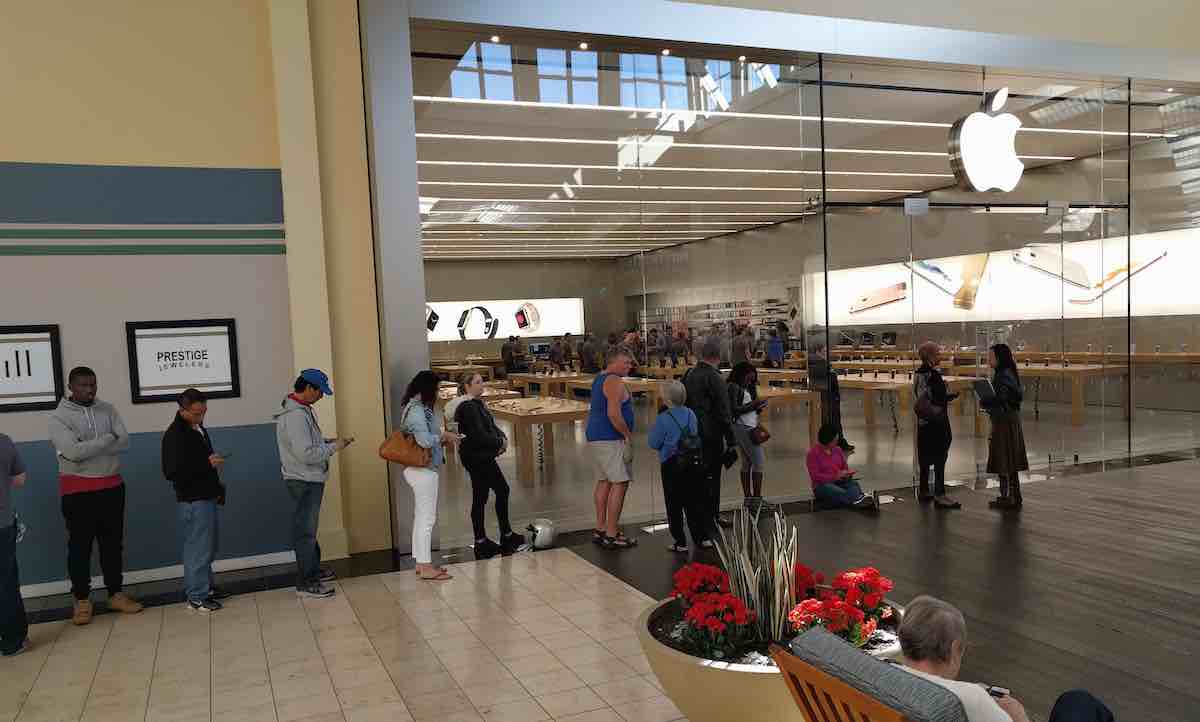 I was at an Apple Store early this morning to pick up a purchase. There was a huge line of people there waiting either for Genius Bar appointments that they’d already booked, or carrying dead hardware and hoping for a walk-in slot.

The sight initially made me wonder if the iPad Pro was being released this morning and I just hadn’t heard about it.

It’s an interesting visual that might make uninformed people conclude that Apple makes fussy hardware that often needs fixing or adjusting. Instead, it’s a sign of how well they handle their customers. Everyone comes to this one place because they know it’ll all work out well in the end.

(Either they’ll fix your MacBook, or all of that perfect lighting and natural wood will hypnotize you into just buying a new one with bigger and better features. Hey, at least you walked out of there with a working MacBook. Action item completed!)