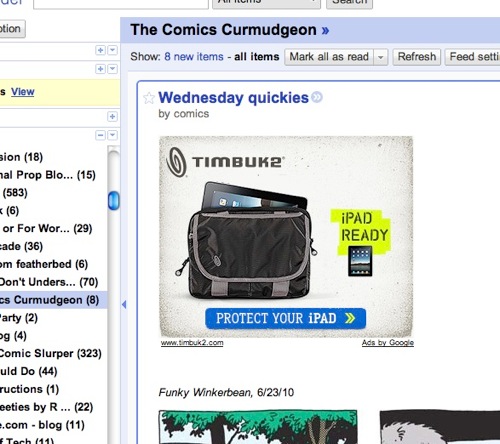 In principle, I should be grateful for Targeted Marketing. Advertising isn’t annoying as a basic concept. It’s the “noise” of ads; the scattershot approach that results in everything you see and hear getting contaminated by useless information. I’m not interested in refinancing the home I don’t own. Even if I were, I’m not sure if I’d go with a financial institution whose most impressive credentials seem to be that they can afford to hire someone to produce Flash animation of a leprechaun farting dollar bills.

But if I start seeing a lot of Google Ads for deals on micro four-thirds lenses, my sequence of reactions would go like this:

1) “Oh. I bet that’s because of all those websearches I did last week.”

I’ve been seeing this ad everywhere. Not just “I see it regularly.” I mean that it’s probably one out of every five ads I see in Google Reader. There are some blogs in which it’s the only ad I ever see. Post after post, day after day: Timbuk2 iPad bag.

I’m starting to feel as though I have some sort of social responsibility to respond. You know, like, the third time a co-worker invites you to one of his regular weekend get-togethers, a casual and friendly “Gosh, I’m busy” won’t do; you need to either accept the invitation out of courtesy, or find a gentle and sensitive way of communicating that you were never a big fan of “Space: 1999” and as such, a themed barbecue, pool party, or charity mini-golf tourney is unlikely to hold much interest for you.

(I have a similar policy with PR emails. I don’t necessarily feel that I need to respond to each and every one — particularly ones from PR people who are eager to hook me up with a client who can “explain the intricacies of the iPhone 4 to me, as well as educate me and my readers about how this revolutionary device will transform…” etc. But if the PR person sends me a followup, I think it’s rude not to at least thank them for thinking of me and assuring them that I’d be in touch if I needed more info.)

So. People of Timbuk2:

“You make many fine, fine products. I’ve bought many of them in the past. I have consistently been pleased with their simple but attractive design, solid construction, and highly practical and functional features. Please be assured that if I should be in the market for an iPad bag, your line will receive favored and serious consideration. However, at this time I have yet to properly define my needs for such a bag, and therefore have deferred this decision to a future date.”

Good. Now at least I feel as though I’ve satisfied social etiquette. I don’t know if it’ll result in my seeing this ad less-frequently. Come to think of it, I’d be profoundly creeped-out to learn that Google’s tendrils run so deep that they’re spidering my personal blog for clues on how to sell me stuff.

Truth be told, the fact that I keep seeing this ad proves that their algorithms are working. Like most iPad owners, I’m still grappling with the Carriage Problem. What’s the “right” way to carry an iPad? Do I stick it in my way-too-big laptop bag? Hug it like the Statue of Liberty’s tablet? Put it in a cloth sleeve and hold it like a lady’s clutch purse?

Or do I buy a smaller laptop bag that can only really work with the iPad?

Timbuk2’s “Quickie” is probably the wrong choice for me. On the plus side, it appears to have a couple of dump pouches for the pocketful of accessories I sometimes take with me (my stopper stand, a folding easel, a set of headphones, maybe a MiFi). On the negative, it lacks D-rings for a shoulder strap. I’d still have to hold it in a free hand. That’s not really an upgrade from the lovely “pajama” sleeve that a clever friend sewed for me. I live in mild fear that I’ll set it down somewhere, get distracted (or allow a ne’er-do-well to distract me) and then presto, I’ve lost my iPad.

Their “Freestyle Netbook Messenger” has possibilities, though. It’s just a smaller version of a notebook messenger bag and it seems to be big enough to hold my iPad plus all of the bibs and bobs that tend to pass into and out of my orbit during an afternoon out of the office.

I also imagine that it’d make a handy “lunar lander” sort of bag when I’m flying. I board the plane, “undock” the Freestyle from my big laptop bag, and stow the latter in the overhead. All of the carryon equipment that I’ll never use during the six-hour flight (my MacBook, power adapters, assorted cameras, etc.) won’t be taking up valuable legroom at my seat; the “lander” contains just the iPad and a few other in-flight essentials.

Well, maybe I’ll check these things out the next time I’m in a store that carries Timbuk2 gear.

My 511 Tactical Pants continue to serve with honor and distinction, But there are limits. I try not to fill the pockets with so much gear that I wind up getting tailed by store security everywhere I go.