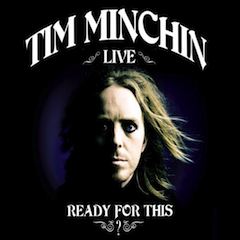 White Wine In The Sun

Ready For This? (Live)

Continuing my kickoff theme of “Comedians, And Please Give Them Their Full Due As Musicians,” we have this triply-appropriate and hugely wonderful track from Tim Minchin. (1) The album is filled with clever, funny songs; (2) but “White Wine In The Sun” is just a flat-out beautiful piece of music; and (3) as a bonus…it’s actually a Christmas song.

Add Tim to my growing list of “whiplash musicians.” I went from not having the slightest inkling that he existed, to hearing my first Tim Minchin song, to owning everything of his that was available in the Amazon MP3 Store, to being very sad that I then had to wait for him to release his next album just like every other Tim Minchin fan…all in the space of about an hour.

I absolutely freakin’ love Tim Minchin. My first Tim Minchin song was “Prejudice.” It’s catchy, and funny, and thus it’s exactly the sort of link you’d receive as an IM on a slow weekday mid-afternoon. Mr. Minchin was nice enough to post a video of the song to his YouTube channel, so I’ll just go ahead and embed it right here-ish:

That’s, like, nine pounds of clever in a five pound bag. I had gone my entire life without realizing that “Ginger” was an anagram of a highly offensive word. And now, it’s difficult for me to think of it as anything else. It serves as a valuable reminder that wordplay, like all active sports, often leads to careless injury. So if you’re going to let your son or daughter go out and spoonerize with other children, make sure they’re wearing protection.

(Aside: I had no idea until very recently that “ginger” is used as a derogatory term for redheads. Is that a European thing? [Edited: or an Australian thing?] It isn’t an American thing, right? We had red-headed kids in my school and yeah, I think many of them got teased. But only under the eternal rubric of “we’re 284 children plucked from our safe and familiar surroundings; we’re hoping that if we ruthlessly tease any kid who’s in any way different, maybe nobody will sense how terrified we all are.”

I never even heard of that use of “ginger” until a few years ago…and I had thought that my experiences with the Mean Kids faction of my junior high school had left me with an exhaustive database of derogatory insults. True, I didn’t have red hair. But I also had no developmental disabilities nor any desire to kiss boys, and the Mean Kids sure didn’t let those details stop them.

In a way, this fresh use of “Ginger” is reassuring. It’s additional evidence that butt-headed prejudice has no rhyme or reason. It’s just a kind of free-flailing tendril of idiocy that doesn’t really care what it latches onto. Now that I know I can’t do anything to personally eradicate prejudice on a worldwide scale, the pressure’s kind of off, isn’t it? End of aside.)

When you’re done laughing at “Prejudice,” switch off the part of your brain that understands English and listen to the song again, solely as a piece of music. That’s some powerful late-Seventies arena-style singer-songwriting, isn’t it? Most of Minchin’s songs remind me of one of Jeff Koons’ monumental-scale balloon animals. It’s a colorful item of obvious whimsy. But the thing’s twenty feet tall and it’s made out of stainless steel. The thing is structurally-sound, thanks to the impressive amount of engineering and fabrication work that went into its production.

“White Wine In The Sun” is a pretty, pretty song. It packs a punch, too. The best way to describe it is as “A Christmas song for nice people who happen to be atheists.”

I hope my atheist friends aren’t offended by that turn of phrase, which I’ve been in love with from the moment I first encountered it. I saw it in a post by an atheist, who used it to describe his default appraisal of religious folk: “Nice people who happen to believe in God.” It’s perfect. I think this basic form describes the vast majority of people.

First and foremost: “Nice People.” Regardless of what sort of jewelry we wear around our necks or what kind of bumper sticker we put on our cars, we know that we all agreed to at least try to be nice to each other, as one of the simple Terms And Conditions associated with the license for human DNA. If you’re upset about that, then you should have read the whole document before clicking the “I have read and agree to all of these terms” and then hitting “Install.”

Then comes the “…who happen to…” bit. However you choose to perceive the big picture of our reality, primarily you’d like to be define yourself as a Nice Person, instead of being perceived through the weird veil of a clumsy adjective. Further, there’s no need to describe atheism or religion in anything other than a neutral tone.

At its core, though, this construct underscores the premise that a nice person is a nice person because of who they are and how they treat people. Maybe their nature has been positively shaped by religion, maybe it’s been positively shaped by rational influences (again, going solely from a non-judgmental dictionary definition of “rational”). So long as they’re nice people, what does it matter?

The singer of “White Wine In The Sun” kicks the song off by saying “I really like Christmas.” Then he calmly states his objections to religious holidays. And although he makes several valid points against religion specifically, they’re gentle and subtle ones, and he’s only mentioning them in passing.

He saves his intense emotions for the main bit, where he explains why he treasures this holiday: he gets to spend time with his parents, his brothers and sisters, and his Gran, all together in the same place. He’s filled with gratitude for this regularly-scheduled day filled with warm feelings of love and support and family and belonging.

What a marvelous sense of perspective. An airliner pumps tons of greenhouse gases into the air as it crisscrosses the country. But it brings you home. On that basis, you can only be grateful that it exists.

“White Wine In The Sun” is a live recording and the song cast an obvious spell on the audience. The audience had heard a dozen funny songs before this one. During the beginning of “White Wine,” they chuckled at all of the right parts. Those who had never heard the song before, however, seemed to grow a bit uneasy; the funny bits were more like clever observations than actual jokes. And soon, the funny bits disappeared entirely. You can almost hear the thoughts going through their heads: “Is Tim…being sincere? Is he trying to make me feel a genuine, cathartic emotion? Hey, where’s that crying sound coming from? Crap! It’s me!”

Sure, I’ll admit it: I was powerfully moved when I reached the core of the song, and he started singing about his family. I’m very sad to say that I’ve shared my last Christmas ever with some of the people on that list of “Dad and brothers and sisters and Gram and Mom.” I still miss those people a lot, even years after losing them.

Just when I was thinking “I can’t believe I got through that without crying,” he started singing about his daughter. And that, dear readers, was when I was very, very glad that I was alone in the room.

Sample “White Wine In The Sun” on the Amazon MP3 store. Everything you buy on Amazon after clicking that link, whether it’s a 99-cent music track of a $7000 wristwatch, will result in my receiving a kickback in the form of Amazon store credits…which I promise to spend on foolish and wonderful things.