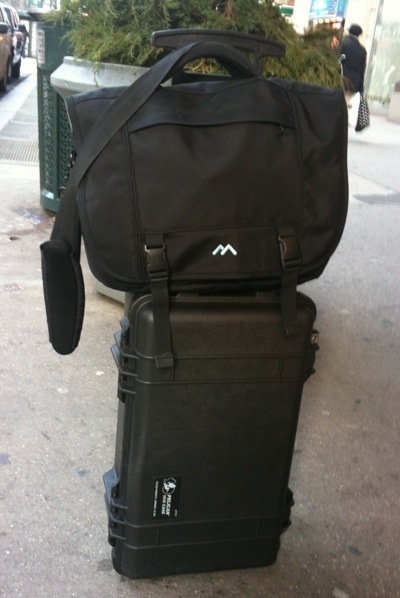 I’m off to San Francisco. On Wednesday, I will enter an auditorium at Yerba Buena Gardens and sit down. Apple will then say things to me and a few hundred of my closest friends.

This ends the factual portion of my pre-event coverage. Everything else (I must remind myself) is mere Speculation. Though if Apple doesn’t plan to announce their rumored Tablet at the event, our first tipoff will be the protective floor-to-ceiling wall of chicken wire that’s been erected between the stage and the audience.

But I’m sure that Apple is well aware that we’re hauling our butts alllll the way out there for just one reason: to hear Steve Jobs sing the theme from “Rawhide.” If it turns out that the biggest news to come from the whole Event is a new blackish-purplish color for the iPod Nano…?

No, that’s not going to happen. I felt pretty safe when booking my flight well a few weeks ago because of the nature of the January 27 Event rumors. They certainly had all of the ineffable earmarks of a managed leak rather than random speculation.

And I should (gratefully) point out that this will be the cheapest trip to San Francisco in Team Ihnatko’s league franchise history. I had two different offers of guest rooms to sleep in, so I decided to play “chicken” with the various travel sites to see how desperate hotels get as the clock ticks down. I was hoping to get a four-star hotel next to the convention center for $8 a night. Instead, on the day before my flight I got a 3.5-star hotel a 15-minute walk away for $75. I learned that the “butter zone” — at least for this trip — seemed to be about a week before check-in reservation. That’s when the best hotels released their rooms to the deep-discounters.

(I’m exceptionally skeptical when I read people’s Tweets about fantastic room rates for Macworld Expo and the like. $149 is no bargain in San Francisco. I’ll pay $100 a night if I’m desperate; otherwise, I know I can find something very good for under $90 by performing a little due diligence.)

I’ll soitenly have much more to say about the event and my time in San Francisco as the week progresses. For now, I’m wrestling with a self-imposed challenge:

I am determined to make this my very first Carryon Luggage-Only trip to San Francisco.

Companies spend hundreds of millions of dollars trying to calculate the exact dollar amount that will suddenly cause consumers to revolt and decide that their product, service, or pill-popping lead singer just isn’t worth it. Apple’s certainly wrestling with that question as they choose the right price for their (rumored!) Tablet.

It’s unpredictable. We’re a fickle marketplace. I can only say that when airlines instituted new fees for checked bags, I sighed and accepted that airlines define success as “we lost way less money than our closest competitor last year.” I didn’t think they were totally out of line to ask for a small fee for each checked bag. When the fees started to creep up, I didn’t really flinch.

Okay. But with the latest round of increases, those fees are now $25 a bag. Each way. One suitcase adds fifty dollars to the price of a ticket!

No. No, no…NO. I’ve reached my limit. I’ve finally had that moment when I feel like a sucker for disassociating those fees from the cost of my airfare. And I feel like a lazy spendthrift for not getting myself in the habit of being thrifty about the things I take with me on trips.

American Airline’s luggage increase doesn’t take effect until February. But there’s no time like the present. This relatively short trip — which includes only one real “business” day — will be a good initial test of discipline.

I will not check a bag unless it’s absolutely the cheapest way to get absolutely indispensable things to my destination.

The two key words being “cheapest” and “indispensable.” If I’m flying somewhere for a formal event, checking a full-size garment bag for my tuxedo is a permissible option. But only if “rent a tux when I get there,” “ship the tux ahead of me via UPS” or “stuff the tux in a carryon and have it cleaned and pressed before the event” are all more expensive than checking the bag.

I have just the thing to help me in this campaign: Pelican’s 1510 Laptop Overnight Case. It meets the maximum FAA definition of overhead-stowable luggage, which is very good. What makes it very great is the fact that it’s made with the same materials and engineering that Pelican uses when designing a case that can protect a 24″ CRT from baggage handlers.

That was a big concern for me. I’m usually assigned to the boarding group that’s technically numbered “4 or higher” but which a more forthright industry would simply announce with “Okay, all the riff-raff we barely give two ****s about can grab now grab their live chickens or whatever and board the plane. Whoops! Sorry, I think you people refer to it as the ‘sky trailer’, don’t you?” By the time I board, the overheads might be full. That’s a bad time to realize that you packed that thin nylon rollerbag with the expectation that you’d be carrying it personally to its destination.

Mind you, I’ll still be packing anything valuable or fragile in my laptop bag. But that hardsider will give me a little piece of mind. It utter intolerance of your desire to overstuff it will also enforce the aforementioned new self-discipline.

(Another bonus of its built-like-a-tank-ness: during my trip this weekend, I used the Pelican as an laptop table while I waited for the train to New York and then as a seat when I waited for my train back home. This thing is bloody sturdy.)

It’s nicely fitted-out inside, with a big zippered compartment for clothes and accessories and custom-fitted bags for your laptop and cables that Velcro in place, right inside the lid.

Choosing a bag was easy. Deciding what to pack will be a challenge. The “one pair of undies per day” rule is a sensible one and will remain. Everything else is open for discussion. Tonight I found myself going through my socks and wondering if I shouldn’t favor the thin ones over the thick, comfortable hiking kind I normally wear.

I want to pack my black blazer. Can I afford it? Or should I take the unstructured “hybrid” shirt/jacket that fills many of the same duties but takes up less space?

It’s the selection of tech gear that’s causing me the most angst. I travel with an SLR. That’s usually not a question. But can I absolutely count on being able to wear it on board like a big black medallion? Or should I take the pocket Nikon instead, just for safety?

At least I have an “free” carryon option for the SLR. What about my netbook? I have the nagging feeling that I’ll have to leave it behind.

Which would be a damned, damned shame. A netbook is a godsend during a conference or an event I need to cover. All I need is something with a keyboard and system resources that’ll let me take some notes, do a little research, and post a few things. The MacBook Pro is Captain Overkill; it’s a hell of a lot to be carrying around a convention hall. I can’t count on the battery lasting through a 90-minute keynote with furious typing and WiFi action, and a 15″ laptop is a pretty big thing to take into a keynote hall where you’re all going to be packed in, kneecap to kneecap.

So. Hmm. Under this new self-imposed restriction, can I afford the luxury of bringing two computers?

Or can I do something as daft as leave the MacBook at home? It’s not the processing power I’d miss…it’s the fact that it’s my entire creative universe, with every tool, project, and scrap of research I work with every single day back at the office.

Damn. A side-goal is to avoid relying on my laptop bag as an Equalizer, packing it to the gills. Otherwise, there’d be plenty of room for both.

Well, I’m sure it’ll work out. It’s an experiment. Initial failures can be expected.

New York was a very minor test-run, to re-familiarize myself with the bag. It was just an overnight, so the packing was simple and even my laptop bag was very light on my shoulder. It was a bit of a thrill, I must confess. I felt like…well, like a normal traveler. You know, those people who seem to have taken just the essentials and who can glide onto a train or an airplane effortlessly, instead of looking like a stevedore trying to manhandle four casks of molasses onto a clipper ship in one go.

So overall, I think this new Mission Rule will be good for the soul. Limitations and restrictions build muscles: after all, the only way to succeed with greater restrictions is through greater thinking.

All I know is that I’ll probably have fewer incidents where I’m unpacking my bag in a hotel and discover that I’ve just taken the 13.5 volt charger for a portable hard drive I haven’t used in a year on a little 3,000-mile vacation away from the office. I’m looking forward to that.

You’ll have to excuse me now. I’ve just remembered that I need to find an 8″ plastic baggie for my toiletries, none of which may contain more than 3 ounces of liquid.