“Research has linked unbalanced soda consumption to obesity, Type 2 diabetes, coronary artery disease, stroke, dental disease, bone disease, depression, gout, asthma, cancer and premature death. These links, as Nestle clearly points out, are more correlative than causative. But all those correlations add up. To Big Soda’s ‘just one won’t hurt’ head fake, Nestle counters with a frightening totality of evidence. A study she cites estimates that sugar-sweetened beverages are responsible for 184,000 obesity-related deaths per year.”

This review got me to buy the book, because the writer praised the thing for putting science and fact above activism. It already seems obvious that drinking lots of sweetened sodas is Medically-Contraindicated regardless of your personal or family health industry; I’ve been more curious to find out if the beverage industries have operated in as shady a fashion as the tobacco industry did.

I made “no sweetened soda inside the house” a Mission Rule way back in my late Twenties, when I realized that it probably wasn’t in my longterm best interests to reach for a Coke Classic every time I took a break from writing. Lately, I’ve been transitioning to flavored seltzers, though diet sodas are still a staple grocery item.

I wish one of these books would analyze the arguments against artificially-sweetened drinks. I’ve read articles that “sound good” but most of them appear to have the same factual credibility as someone saying “Even in its purest laboratory form, every molecule of water consists of almost seventy percent hydrogen. Hydrogen is a primary component in rocket fuel and is also used in the industrial production of petroleum products. It’s also highly corrosive to metals.”

Diet soda is the big lie. Tells your brain you need high levels of sweetness. May be 0 calorie but I still think it’s highly harmful stuff


That is, drinking Diet Dr. Pepper isn’t dangerous in and of itself, but it programs your brain to want other things that taste sweet. It’s an interesting suggestion.

(One of the greatest culinary experiences of my entire life: drinking bottles of real-sugar Coke in Belize after two or three hours of hiking around.)

“Daddy’s magic thinking juice.” This is how I often describe the bottles and cans in my fridge, much to the confusion of friends and family.

“I didn’t know you even had kids,” they reply, cautiously. “Nor that your shame over your escalating drinking problem is so great that you choose to conceal its scale behind a code phrase.”

Well, neither thing is true. Alcohol consumption is often linked to parenthood (particularly during one’s frolicky teen years) but I only have a nodding relationship to both concepts. No, I describe my onhand inventory of soda that way because over the course of a long writing day, a glass of something fizzy and tasty helps to grease the gears of productivity. In fact, when the final deadline of a book project is less than two weeks away, my blood is about 20% phosphoric acid.

Is this a healthy habit? Oh, absolutely. I have zero back problems and have never been killed by one of those deep-vein thrombosis deals. I fix my doctor with a steely gaze and insist that it’s all thanks to my compulsive need to get up out of my chair every 45 minutes and walking to the kitchen to fix another drink.

But my powers of creativity and self-deception have limits. Back in my Twenties, I foresaw that drinking a couple of 12-packs of Coke every week was a career-limiting strategy. I instituted a new mission rule: no sugared sodas inside the house. I switched to Diet.

That was the only change I made to my Soda Protocols until recently, when I started to feel like it was time to tinker with them. Chalk it up to my entering my “long haul” years. Due to poor planning, I didn’t die in my youth with the final pages of my unpublished but soon-to-be-universally-acknowledged masterpiece crumpled in my cold hands. Onward to Plan B, then: start making choices with my longterm health in mind.

What’s the problem with my soda consumption? Is there a problem?

I’m not sure, so I’ve been playing with the variables. I switched to ginger ales and citrus flavors for a month because I was curious to see if the caffeine in my sodas was screwing me up in some way. I suffered no withdrawal symptoms (despite what years sitcom evidence predicted) and mmmmaybe I was falling asleep faster. It was an interesting data point if not a eureka result.

Okay, but what are those artificial sweeteners doing to me? “There’s no sound scientific evidence that any of the artificial sweeteners approved for use in the U.S. cause cancer or other serious health problems,” says the Mayo Clinic. Okey-doke! That’s good enough for me. But I was intrigued by something Alton Brown said in his podcast: he thinks artificial sweeteners are the devil because even if they have no primary ill effects on your health, they reinforce the brain’s desire for sweet-tasting things.

In any event, it was worth giving up artificial sweeteners for a while, too. As with the caffeine thing, it was as much an experiment in self-control as anything else. I try to be on guard against compulsive behavior. Am I drinking this Diet Dr. Pepper because I genuinely enjoy it, or is it just something I’ve programmed myself to pour into a glass a few times a day?

In the end, all of this experimentation has left me disappointed. I had hoped that a month after eliminating this thing or that thing, my typing speed would increase by 20% and/or I’d finally get the hang of the “wet on wet” painting techniques of your leading TV art instructors. Nope! All I got out of any of this is the reassurance that I’m not chemically or psychologically addicted to any of this stuff (okay, that’s a win) and the knowledge that in some vague way, I might be making better longterm health choices. Even if that’s true, I won’t be able to blow out the candles on my 80th birthday cake and claim that it was because I kicked Coke to the curb in all of its hoary forms.

That’s the disappointing thing about most healthy living decisions. At least when you play a video game, you shoot open a chest, a first aid kit tumbles out, you walk over it and presto! The dingus in the corner of the screen tells you that you can now afford to get shot four more times. I suspect that this is why people would rather spend hours drinking orange soda in front of a video game instead of exercising. We need a system of scorekeeping for real life, don’t we? Unless God hands me a numerical score at the end of my life to show me what I “won” by changing my drinking habits, all I have to go on is faith.

(I know: He’s a big fan of Faith. It strengthens character and also saves Him a crapload of bookkeeping.)

Well, the experiment phase is over. I’ve made three sweeping changes to my Soda Protocols:

We seem to be living in a new Enlightened Age of real sugar colas. Pepsi seems to have made the “Throwback” flavor a regular item; on top of that, they’re promoting three new “real sugar” flavors as a summer promotion. Why the holy hell doesn’t Coke jump on the bandwagon, too? We love cane sugar-sweetened Coke so much that we’re willing to import the stuff from exotic foreign nations, such as Mexico and Costco! The fact that there isn’t a domestic variant trademarked as “Coke Refresco” proves that The Coca-Cola Company is a society in a state of chaos. The company should be annexed by a neighbor and run by a colonial governor until such time as they are once again capable of self-rule.

(It’s the humanitarian thing to do. Blackberry watched the iPhone sweep in and take over the phone market, and yet they still refuse to make phones out of real cane sugar. I’d hate to see that same sad fate befall Coca-Cola.)

On the subject of Pepsi Throwback: it was a one-off summer promotion that was so successful that Pepsi just decided to keep it around. The first time I encountered it, I bought the one remaining 12-pack of cane-sugar Dr Pepper in the store display and holy mother of God, it was some of the tastiest stuff I ever drank. This was years ago and I swear to you that every time – every time – I see a 12-pack of Throwback Pepsi, I instinctively check to see if there’s any Heritage Dr Pepper. Make it a regular damn product!

We’re Americans! The only thing we like better than sugar is a super special kind of sugar that lets us congratulate ourselves for our discerning taste and superiority!

THIS, me hearties, is Heritage Dr. Pepper: 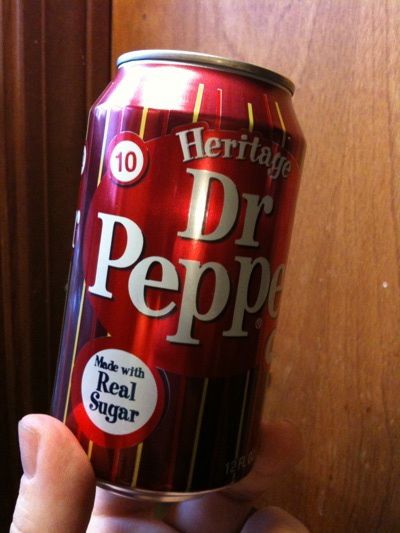 Remember Pepsi’s brilliant idea last year? To do a special limited-time run of beverages made with real sugar? Well, they’ve expanded this wonderful program this year and added Dr. Pepper to the “Throwback” lineup.

Yes, there’s a bottler in Texas who still does cane sugar Dr. Pepper. But this stuff here can be purchased by the case, by frenzied, joyful case, when you enter your local supermarket with the idea of just buying some lunchmeat and vegetables and wind up running back outside to get a cart.

I find that the Heritage Dr. Pepper is more of a sippin’ liquor than something you might just slug down. I can easily make one can last a full half an hour; each mouthful should be allowed to linger on the tongue and savored. It’s a dynamite flavor.

Good God. Why doesn’t the Coca-Cola Company ever come up with ideas as good as this one? We get Passover Coke, sure, but I think it’s best to maintain a separation of church and carbonation.