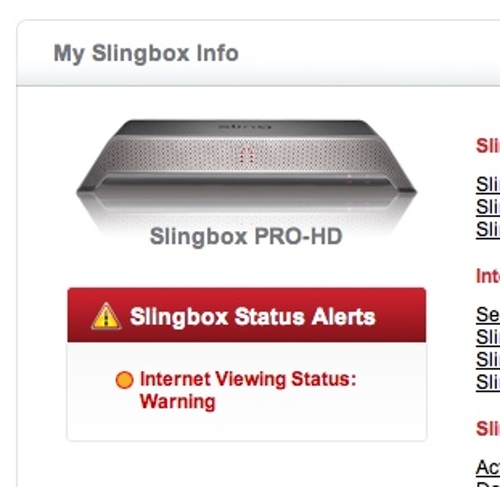 You can just imagine how frequently I need to try to get a new piece of software or hardware working here in the office. My extensive knowledge, experience, and godlike intuition merge to assure a smooth and successful transaction nearly every time, I assure you.

But when I look back at the smoking wreckage of those installations that went very, very badly,

(The “smoking” part happened because of the device’s poor design, at which point I threw it onto the floor and furiously jumped up and down on it many times, thus making myself solely accountable for the “wreckage”)

…I see that they tend to move through three progressive stages:

There’s an opportunity for success before I reach each one of these checkpoints. I just sometimes make the unconscious decision not to recognize or seize upon these opportunities, just to keep the puzzle going and prolong my joy. Other times, I’m having trouble because the hardware, software, or service I’m fighting with has been poorly designed. And sometimes…well, nobody’s to blame. It’s unreasonable to expect every user to have a smooth experience with a device/service/system when so many variables are involved.

Yes, that’s where I am with my Slingbox at the moment. I’ve rediscovered this lovely piece of hardware that turns any home video component into a networked device. The video and audio outputs of your cable box/DVR go into the Slingbox, an IR blaster goes from the Slingbox to the top of the cable box, the Slingbox gets plugged into your home network and hey-presto: you can watch TV via a browser window from any Mac or PC in the house. Anything you can do via the cable box’s realware remote control (change channels, watch a show you’ve recorded, grab a pay-per-view, anything) can be done by pressing onscreen buttons. 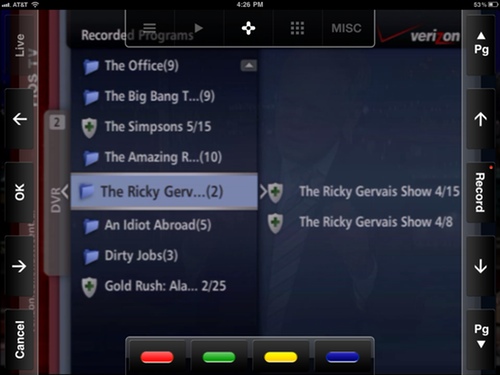 I’ve got it working just fine on my home network. I’ve even got it streaming to an HDTV in a downstairs room that lacks a cable drop. Add it all up, and I’m using something like $600 worth of advanced gigabit networking gear just to get back the ability to watch the Letterman show in my den. I haven’t been able to do that since the switchover from analog to digital TV broadcasting.

(Y’see, back in 2008, I could get almost 20 broadcast channels just by cutting about fifty cents’ worth of speaker wire and screwing it into of the TV’s antenna terminal. CBS, and 16 other free over-the-air channels, were a little but ghostey and herringbone-ey, but it was still much, much more entertaining than a black screen with a curt notice reading “Weak signal”.)

(Y’see, the engineers who designed DTV prissy, rigid standards figured that I’d much, much rather watch a crystal-clear, digitally-perfect, high-definition show on the Religious Nutter Network than a very slightly degraded show that I’m actually interested in.)

(Y’see, I continue to be not much of a fan of the digital broadcast switchover.)

I do enjoy the absurd complexity of this setup, though. On the whole, it’s much more satisfying than getting a cable box installed down there. My cable provider even has an iPad app that offers remote control and access to the program guide. So when I realize that Letterman is in repeats this week, I flick on my iPad, pull up the listings, and tap on an episode of “Chopped” that I haven’t seen yet. The iPad goes through the WiFi router which bridges to the Ethernet network which talks to the cable company’s servers a hundred miles away which talks back to the cable box upstairs which changes the channel, whose video is sent to another box and converted to an IP stream which is sent across the CAT6 house backbone to another network box next to the set which converts it to HDMI video.

You need to be a certain kind of nerd to see this as a vast improvement over paying another $6 a month for the extra rental fee. Or, maybe you just need to really hate your cable company.

The Slingbox is supposed to work over the Internet, too. I’ve had no success on that front so far, alas, but I’m willing to give Sling a little slack. Of all the network administration tasks, is there anything I enjoy less than trying to set up my router to allow access to a specific service from outside my home network?

Eating the router would be less pleasurable, I suppose. Maybe. But honestly, at this moment I’m thinking “If I were to grind it into a fine, fine powder, mix it in with this lovely Japanese pepper blend I recently came across, and were allowed to just sprinkle a tablespoon of the stuff into dishes here and there over the course of a year…well, would that be so bad, really?”

These kinds of problems remind me that networks were really never meant to be administered by people who aren’t trained for the job. Few of the basic standards that make these things work were designed with plug-and-play in mind. So when you get a new network-enabled whatsit, it’s like changing a diaper. You really don’t know what you’re getting yourself into or how badly this is going to go until you open it up and get your hands in.

I do love the Slingbox…I forgot how cool this thing is. I’m getting back into this stuff because of the iPad. The Slingbox hardware and software hasn’t changed much since I wrote my review a couple of years ago but now that so many of us have this super-portable 10″ color tablet, the idea of “cable TV streaming to any Internet-enabled device” has a new and slightly more glorious tone to it. I mean, I can’t justify getting a cable box installed here in the kitchen-den area. Why in the world would I ever run it out to the porch, or the laundry room? But hey, cool: a Slingbox on my network means that I can have 400 channels wherever and whenever I want them.

Now if I can only get this thing set up so I can watch TV while I travel! My life won’t be perfect but during those many moments in which it totally sucks at least I’ll have the option of watching a little TV to take my mind off of things.

Everything’s working fine, now, and I didn’t even need to hear back from the people at Sling. It turned out that I had made the right fixes early on, BUT I didn’t know it because I was testing the remote access by using the Slingcatcher app on my iPad (with WiFi turned off to force it to connect via the “outside” 3G network).

It took me a stupid-long time to theorize that maybe the Slingplayer app was rejecting the 3G connection. Partly this was because the app is supposed to work fine via mobile broadband, and the app’s lamely-nondescriptive error message definitely gets credit for an assist. The biggest factor was my tendency to focus on the parts of the problem that I understand the least, in a valiant effort to become less dumb. So I learned all I could about what the Slingbox actually does behind the scenes, and pored through the documentation that my cable company doesn’t provide but which the router’s manufacturer offers in spadefuls.

When I get frustrated with a problem like this, I sometimes channel Ed Harris in “Apollo 13,” as flight director Gene Kranz. The spacecraft is quickly losing power and life support and nobody has any idea how to fix it. “Let’s look at this from a viewpoint of Status,” he says, after taking a long hit of nicotine. “What do we got that’s actually working?”

It usually shakes loose something helpful. That’s when I stopped focusing on things I didn’t know much about and zeroed in on things I could figure out for sure. I know port forwarding. If the information on Sling’s website was correct, I’d set the router correctly. I scanned the network to verify that the Slingbox was where I thought it was. I verified (via CanYouSeeMe) that the router was indeed not blocking that port. Then, I went back to the online tool on Slingbox.com (shown in the first screenshot attached to this post), ran the setup again just for good measure, and gorblimey! The tool said all was well.

I then shifted from Kranz to Holmes: having removed all other possibilities, what remained had to be the correct answer. It was time to grab my MacBook and my iPad and find a public hotspot. Result: 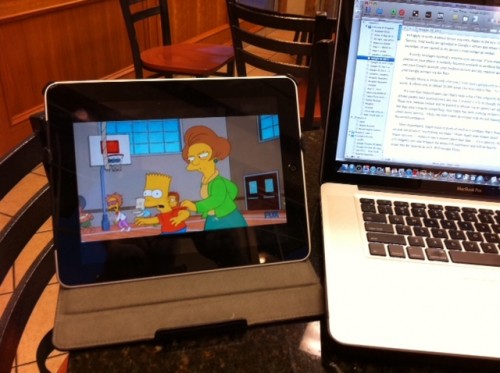 “I should become less dumb about the parts of the problem that I don’t fully understand” is a humble and correct reaction and it leads to…well, to becoming less dumb about these things you don’t fully understand. But geez, Andy! How about starting with the basics, and seeing if a cable has become unplugged first? Because in a sense, that had been the root of this problem all along, after a silly error had been found and corrected early in the process.

Well, on the plus side, I now know a lot of things about my router that I didn’t know before.

Another plus: this was a perfectly acceptable excuse to go out to a donut shop at 8 PM on a Sunday night and enjoy a lovely snack.

(Oh, hush. The only other public WiFi spots open on a Sunday night were a Panera and a Starbucks. Neither one sells anything that’s much healthier than a plain bagel and a Diet Pepsi.)

And plus: last night’s “Simpsons” was a good’n.