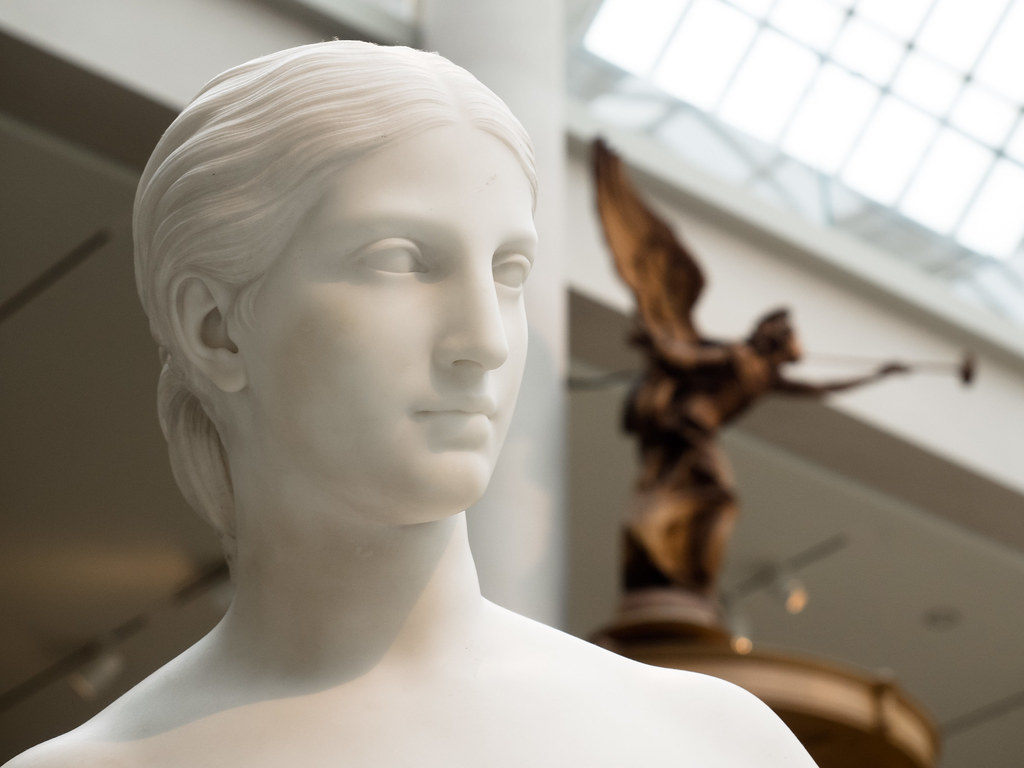 Through the entrance; approach the grand staircase; proceed instead through the little hallway that runs alongside it on the right; enter the big medieval church-like exhibit space; exit immediately to the right; go through hallway of additional medieval art; straight past the silver saddle in the glass case and Gallery 700 (the Charles Engelhard Court of the American Wing) is just past the double glass doors.

Yup, I’ve now been here so many times I know the way by memory. The Met sculpture garden of 19th and early 20th century American works is slowly closing in on the Boston Public Library as my favorite photo spot.

It has that same sort of appeal for me as a photographer. The more times I visit it, the better I know the place and where to look for photos. I think I build a map of the space that informs me on a subconscious level as a walk around with my camera. If I were a better photographer, I might have spotted this shot on my first visit, instead of here on my…tenth? Well, it’s been a lot of visits and I’m neither the photo geek nor the guy interested in lovely art is anywhere near tired. I’m so lucky to be able to sneak up here during so many of my visits to the city. It’s become my default place to go when I’ve got a couple of hours free and no time to make plans to see something new.

Oh, and there’s another advantage to familiarity and repeat visits: I remember the shots I screwed up the last time. It’s too bad I can’t arrange a do-over on some of the photos I shot in Beijing!

This monument to Edgar Allan Poe was erected in October. It honors Poe’s roots in Boston and shows him returning to the former home, just down Charles Street. He stands in “Poe Square.” It was named after on Euriabam Daniel Pograham, a mid-1800s grocer and chorister known as “Poe” to his friends. He had a shop in that area.

I’ve been taking an interest in public sculpture and I’m very pleased to see some more of it placed in the city. It’s quite appropriate that this figure be located where it is (above and beyond the historical connection, that is). He’s walking away from Boston Common and the Public Garden, where a couple of dozen gorgeous monuments exist…so this one only adds to the value of a good walk around these two blocks.

Second bit of pleasure: they went with a representational approach. I’m often disappointed by modernist public sculpture. I’ll see a monument that looks like nothing so much as a fish being crushed by an acorn, the plaque says “In Honor Of French-Hungarian Immigrants, 1872-1905.” I blink and I re-read the plaque and then I think there’s at least a 70% chance that the artist had this thing cluttering up his garage for twenty years, unsold, before he heard about a competition for this memorial. The greatest effort he put into it was to explain how these shapes related to the subject.

Okay, and I’ll tread softly into a sensitive issue: the 9/11 memorial in the Public Garden. The Public Garden is filled with remarkable sculptures and monuments, most of them placed no later than the 1920s. Placing a new memorial there was an interesting challenge, no doubt, and given that two of the four hijacked planes departed from Boston, bearing so many New England passengers, the connection to the city is quite a painful one.

The memorial isn’t supposed to be a sculpture; it’s meant to be a contemplative garden. Benches are arrayed around a stone crescent engraved with the names of those murdered during the 9/11 attacks who had connections to Boston.

I walk through the Public Garden and I sometimes wonder if this was the most fitting tribute possible. How will visitors to the Public Garden relate to this monument in fifty years’ time? Will it draw people in? Will it cause people to stop, and sit, and reflect?

Or will they simply see another stone shape with names carved on it, and not look or think twice?

I think about the George Robert White memorial, also in the Public Garden. Also known as “Bread Upon The Waters,” it was sculpted by Daniel Chester French, one of the three dominant American sculptors of the age. It’s objectively a thing of beauty. You want to come closer and examine it. And this winged figure, casting seeds from a basket, is a fitting tribute to a philanthropist who contributed so much towards the beauty of the city’s public spaces and to area hospitals.

I learned about him and his work because the monument intrigued me. Me, someone born seven decades after White died.

Ditto for the Robert Gould Shaw memorial on Boston Common. It engages people’s minds and spirit in a way that a basic marble plinth engraved with the names of the members of the 54th Regiment never could.

Back to Ed. I’m surprised he isn’t little bit further up towards the Common, though. If he were nearer to the corner, he’d be easier for people to spot. As-is, anybody headed up Boylston Street — a major thoroughfare, particularly for pedestrians and tourists — is likely not to spot him.

Curious, I looked up the story behind the statue. Ah. Poe hated Boston and mocked certain Boston writers as “Frogpondians.” He’s walking purposefully away from the Frog Pond in Boston Common, and towards his former home. Cool.