Back in the sixth grade, at the end of a school day, I tried to get a cheap laugh from the rest of the class by pulling away a friend’s chair while he tried to sit down. I wasn’t trying to be mean, but yeah, it was really mean, and dumb. It’s not like I’d cleared it with him before I did it. And is it ever possible to look cool after you’ve just fallen on your butt? I feel a serious twinge of guilt every time I remember that event.

There! That wasn’t difficult, was it? And I should point out that the preceding paragraph was a DIY job written by someone without the benefit of highly-paid staff. Why, then, is the Romney campaign having so much trouble dealing with an ancient story about high school bullying?

I find the process of a national campaign fascinating. Most candidates keep plugging away until they find themselves (though circumstance or careful management) with a specific opportunity to break away from the pack and make America stop thinking of him or her only as a candidate for a party nomination. If you want to win, at some point you have to do something to make people think of you as someone who could be a President. Obama had That Moment when a ranty video surfaced of his pastor giving a screechy and angry sermon. Out of context, the video played to some people like a call for racial violence.

The video went viral and it became a major distraction. The campaign could have ignored it or parried it off. Instead, they recognized it as opportunity for Obama to stand behind a podium, say some important basic things about who he is and what he believes, and in doing so, demonstrate the world that he was fully qualified and prepared to occupy the Oval Office.

If you haven’t the time to watch the speech, then download it to your phone or read/Instapaper the transcript. It’s gripping stuff; I listened to it several times over the course of that week. In 45 minutes, he convinced America that he was one of those rare people who are intellectually and emotionally capable of leading the world’s dominant nation.

I want every credible candidate from any party to have That Moment. I want to feel as though no matter what happens, my next President isn’t going to be the political equivalent of an “American Idol” winner. I want to know that this is a serious person who’s committed to a life of public service, and that they’re seeking this office because they have an earnest plan to improve the condition of all Americans. I won’t waste my time and attention on a candidate who seems to be in the race because they saw someone on TV in a spotlight surrounded by fireworks and confetti cannons and madly-cheering people and thought “That could be ME up there!”

This week, as the result of either Circumstance or “Careful Management” on the part of Romney’s opponents, the campaign is dealing with its own distraction: stories of the cruel bullying or dumb pranks (pick one) that he instigated when he was in high school. And yeah, the fact that people are dredging up something from his teen years and claiming it has relevance on how a President will fight our wars and fix our economy is pretty damned silly. What I’m actually paying attention to is how Romney reacts. For now, Romney seems to be content to parry it all off with an “acknowledgment apology” (ie, “I acknowledge that some people feel as though an apology is called for, and therefore, to those people who do feel that way, I apologize”) accompanied by the sort of chuckle that seems to represent nostalgic reverie as much as any actual regret for the stupid actions of one’s youth.

I imagine that a national political campaign is disorienting for anyone who’s spent his or her entire adult life as a successful CEO. It can be the first time in decades that he or she is actually being held personally accountable for their actions. An oil-industry CEO directs and enacts a plan to cut costs wherever possible or impossible, reasonable or unreasonable. The capos under his command are told to ignore a law if costs of compliance are greater than the cost of fines and litigation. The CEO funnels gargantuan amounts of lobbying money towards the elimination of any governmental oversight at all.

And then, after 4.9 billion gallons of oil spill into the Gulf of Mexico, who gets the blame? The tip of the spear. Never the hand that threw it.

After decades in such a low-gravity world, is it any wonder that a guy like Mitt has trouble finding his footing? Under the circumstances, I’m not terribly surprised that he doesn’t clearly remember this incident and doesn’t see the need to show personal accountability. I’m not even surprised that he doesn’t see this bullying brouhaha as an opportunity to define himself as a candidate.

What surprises me is the fact that with national election just six months away, the presumptive nominee of the opposition party is still getting such awful advice from his campaign managers. I mean, at some point, a campaign acquires enough momentum, support, and money that there’s someone there at the candidate’s elbow to tell him or her “When we get to the county fair, do not, do not, do not allow yourself to be photographed eating a corn dog, or indeed inserting any sort of shaftlike object into your eager, wide-open mouth.”

When a candidate passes that simple test, it fills me with some small bit of extra confidence about his or her abilities. “Thanks, but no. Oh, boy, my spouse will never let me hear the end of it if I get mustard all over my one clean jacket” isn’t up there with Obama’s 45-minute speech on race in America, but isn’t it an impressive display of common sense and mental agility? It indicates that this person can connect an immediate choice with a future undesirable outcome. Or, in the absence of the candidate’s own common sense, doesn’t it indicate that he acknowledges his own failings and is at least smart enough to hire smart advisors?

Yes, I’m thinking specifically of “That Photo” of Michele Bachmann: 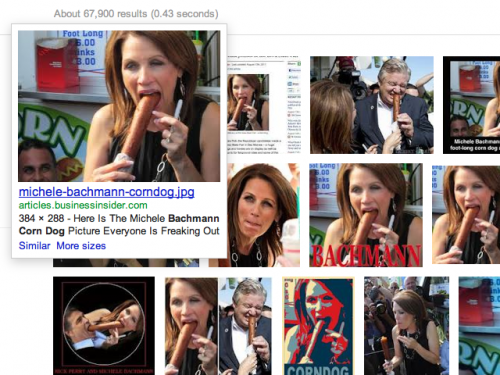 So this is how Romney responds to allegations that he bullied a long-haired kid in high school. He says he doesn’t remember the incident, even though it definitely happened. He’s not talking about it, and that absence of data from a candidate leaves a big void that a voter backfills with Worry. I worry that maybe he’s lying about his recollection. Why lie about something that he did more than 40 years ago, when “I did a lot of stupid things when I was a kid that I’ll regret for the rest of my life” is one of those common touchstones that all humans can relate to, and would readily forgive? I worry that maybe he genuinely categorizes that incident as just Jolly Hijinks. Something that merits a laugh over a gin-and-tonic during a high school reunion. Even though it seems like it was a terrifying incident that might have haunted the victim for the rest of his life.

And I worry that maybe he genuinely doesn’t care about how the incident and his reactions to it appear to the rest of the country. I worry that he knows that his supporters are his supporters, that the other members of the party will support him as soon as he officially wins the nomination, and that once he’s elected, the opinions of the people who didn’t vote for him don’t matter at all. This was a massive opportunity for Romney to show the country that he connects to people, that he has a sense of empathy, and that he believes that our country is beset by social problems that at times appear to be just as troubling as our economic ones. But the campaign let that pitch buzz right past him.

When Obama gave his “More Perfect Union” speech, it became important to me that he become the next President. There’s another kind of Moment in a candidacy. When John McCain nominated Sarah Palin as his running mate, and it became clear how unprepared she was for the campaign, let alone the office of the President, I stopped thinking of him as the guy I wasn’t going to vote for and I started thinking him as the guy I wanted to vote against. I honestly think that McCain, plucked from the right phase of his political career, could have been quite a successful President. And while I’m no fan of Sarah Palin, I will eagerly defend her against those idiots who refuse to acknowledge her as a human being worthy of a certain non-negotiable amount of dignity and respect.

That said: if we had elected the McCain/Palin ticket, the British would have declared us a society in a state of chaos, incapable of self-rule. Parliament would have annexed us back into the Empire and appointed a colonial governor. “Thank God. And God save the Queen!” I would have cheered, as I watched the Royal Marines curtly re-raising the Union Jack over the Old State House after their little 237-year setback.

And Marty, if you’re reading this: I’m sorry about the thing with the chair. Let me buy you a drink sometime.