Here’s a photo I shot for the column I just filed. I had to go back and reshoot it: 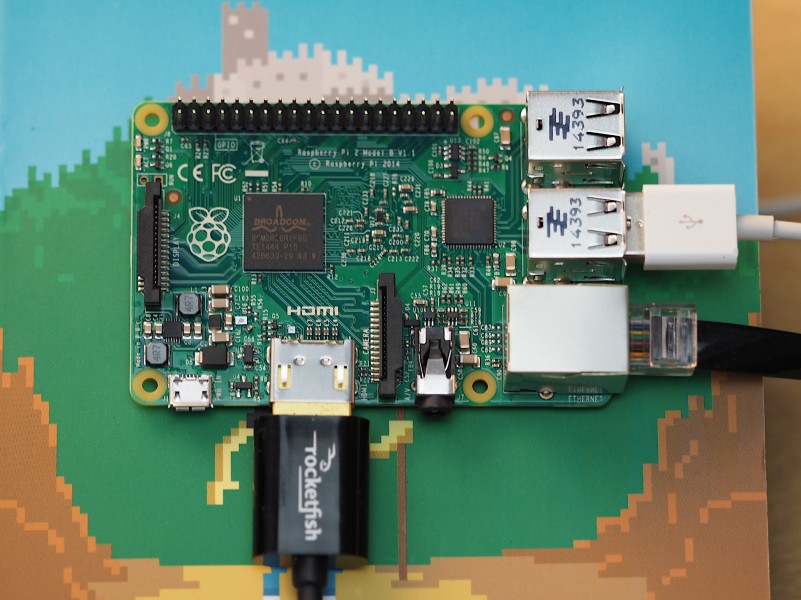 If you’re a Raspberry Pi user, you’re sure to spot the problem.

I populated its ports as though it were in operation. USB cable, ethernet cable, HDMI cable…but dammit, yeah, I forgot to to hook it up to power. There should be a microUSB cable connected to the lower-right.

I do like to get things right. But in the olden days, I might have posted it anyway. It was late in the day, I had a lonnnng list of things to finish before the weekend…I might have held my nose and cursed myself out and then went with what I had.

But this is the modern Twitter age. Here’s what I saw when I peeked into my near-future: I saw dozens of people spotting the mistake and saying “Amazing! The Pi 2 benchmarks just as fast as even a Mac Pro…assuming neither of them are plugged in to AC!” Things of that nature.

This is no way to start a weekend.

Particularly when I already know it’s supposed to end with 3 to 6 inches of new snow.

So. Back to my studio desk I went, where the Pi was still set up.

Incidentally, bonus points if you identified the book I used as a background. It’s good stuff and well worth your attention and your ten bucks.

Okay, look, before you even mention it: the phrase “it’s worth your ten bucks” automatically implies that it’s also worth the $4 you would be paying for the Kindle edition. And, yes, if you’re a Prime member you can read it for free. Zero is also less than ten bucks, which brings it under the original umbrella of my recommendation.

stupid two-way connection with my readership

i should get into the ladder business

i bet i could be a kick butt ladder salesman

do they even have ladder stores

ill write an app you gotta have an app

Edited to add: when I wrote this, I needed to look at the photo again to see where the microUSB connector is. But then a puckish thought struck me and I wrote “It took only 52 minutes for someone on Twitter to point out that I had written “There should be a microUSB cable connected to the lower-right” when it should be “lower-left.”

And they were totally nice about it, this is not a column about people being jerks on Twitter, this is an essay about how quickly a column can get fact checked and copy edited when you’re crowdsourcing the job to tens or hundreds of thousands of people.

Incidentally, the fact that I said “connector” instead of “cable” went unnoticed by the writer and all readers to date. I have now fixed it.