Yesterday was the sort of day when a visitor to Boston thinks about maybe moving here and those of us who live in the are pat ourselves on the back for having made such a sensible choice. It was beautiful. Blue skies, cool weather…overall, when I left the Boston Comic-Con and entered the fresh air I was very pleased I had a bit of a walk to get back to where I parked my car. Particularly because this walk could end, after only the slightest of detours, with a stroll through the Public Garden.

The Public Garden was chock full of people determined to enjoy the former salt marsh and rope-drying area that had been transformed into a lush, colorful oasis by landscape architects more than a hundred and fifty years ago. 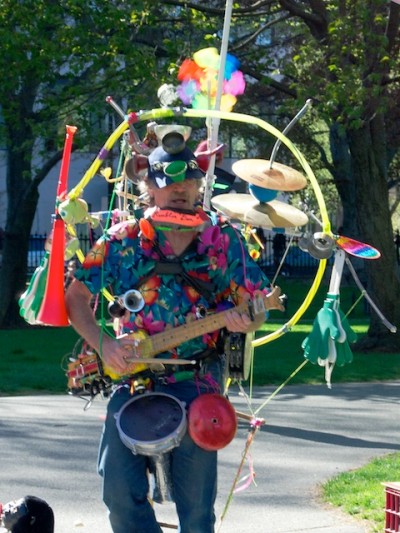 …And, to my annoyance, one idiot who was equally determined to make placid enjoyment impossible. This clumsy busker was doing a one-man-band act with an electric guitar and cymbals. The Park Service allows that kind of idiocy in the Common, but the Public Garden is supposed to be a place of peace. You’re not allowed to throw around frisbees or footballs and you can only play music if you do so quietly, and on acoustic instruments. You’re not even supposed to engage in any kind of commerce there. That’s why if you want to get a drink, you have to cross Charles Street and visit the pushcarts at the entrance to the Common.

(Back to the beauty and tranquility.) 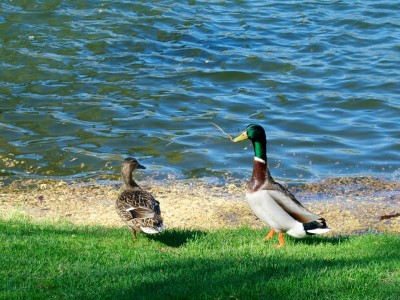 The flower beds were in bloom. Mallard drakes and hens were swimming in close, cozy pairs. The Swan Boats were making their last few laps around the lagoon. I was tired from my day’s efforts and was sort of eager to get to my car and cruise on home, but the whole scene was irresistible. I found a vacant bench and parked myself.

After about a half an hour of this pleasantness, I sensed it was Time To Go. I followed the lagoon to the stairs at the feet of the bridge and when I reached the surface, I finally realized why there were so many people around: Sunday was Project Bread’s annual Walk For Hunger. More than 40,000 men, women and children were spending the day walking through the city to raise money to help fund food banks throughout the state. The Charles Street entrance to the Public Garden was the finish line.

After a moment’s hesitation, I joined the flow. I really did need to get to Charles Street and it was just a few dozen yards away.

I nonetheless felt a little guilty when I exited the gates to the Public Garden and heard all of the applause, cheers, and supportive car horns. I tried to generate a little wave that indicated “I’m not one of these fine, selfless people in the Walk For Hunger; although I do think that food banks are among the most important and effective kinds of charities, in this particular case, I’m a humble pedestrian.” But all that came out was a cross between Queen Elizabeth’s “screw in a light bulb”-style wave and a Vulcan salute.

Project Bread is always eager and thankful for your donation. Click here for their donor page.