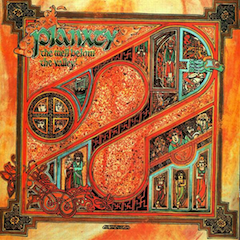 The Well Below The Valley

I should warn you: this is a bagpipe number. The Irish folk band who recorded “Hewlett” list the instrument as “Uilleann pipes,” no doubt exploiting the same regulatory and moral loophole that allows the restaurant industry to print the word “sweetbreads” on the menu instead of the far more accurate “testicles.”

Not that I blame them, of course. Which would you rather have jammed in your ears?

(OK, clearly, I’m referring to “Bagpipes or Uilleann Pipes?” there.)

(Maybe I should just press onward.)

There’s something about this track that makes me think “Christmas” despite the complete lack of any of the usual yuletide ID markers. It’s an instrumental, so we don’t get to hear about reindeer or red suits. No bells (jingle, tubular, or church) or any of the other instruments of the season. And yet, it makes me picture a room with a fireplace and a lighted tree (illuminated by electric lights, not by sparks thrown by the fire) and think about every positive experience I’ve had at this time of year throughout my life.

That makes “Hewlett” a very 2011-style Holiday song. December has undergone a thematic shift over the course of my generation. Extremists in the religious and anti-religious camps sense this shift and they’re inspired to interpret it as a “War on Christmas”; some even see it as a call to further action. We, the 99% see it as simply moving the December celebrations into a much larger tent. One where we can celebrate religion openly and those of us who don’t celebrate religion will choose to simply celebrate humanity. Together, everyone cheers the annual miracle that the entire country can all agree to try really hard not to act like dillweeds to each other for a couple of weeks at least.

Yes, if I were to rewrite “Adeste Fidelis” for a modern age, my first action would be to find someone who can translate “Let’s all tone it down a little, could we?” into Latin for me.

Although we’re not united by a common religion, we’re certainly united by common experiences, and non-religious music like this packs a punch for a wider swath of people. I don’t think music like this invites anybody to remember the bad times they’ve had during the holidays. Instead, it sifts out the good stuff. It makes us think of the taste of the candy cane that was used to stir our coffee and not the stickiness that the wrapper left on our hands. The fast and exciting ride down the hill, not the uphill slog we made to get the sled up there. Christmas vacation, not the midterm exams that purchased our release.

That’s to say: I don’t begrudge a community for having a manger scene in their town square. It’s only relevant and meaningful to a certain subset of the community, but it’s just one display in one corner of the park. What unifies us are the thousands of colored lights strung through all of the trees around it.

I hope all of you had a wonderful holiday.

And seriously, don’t listen to this song with those silicone “seal out all other sound” earbuds that you press deep inside the auditory canal. Remember: bagpipes.

Try or buy “Hewlett” at the Amazon MP3 Store.