Well, you just never know who’s out there reading your blog. A mid-level official at a three-letter government agency read my previous post about an idea for a geeky new kind of alarm clock. He sent me an email which included some interesting data about alarm clock usage among geeks.

Apparently, they track these things on a month-by-month basis. I’ve boiled down his 117-page draft report into an illuminating pair of pie charts: 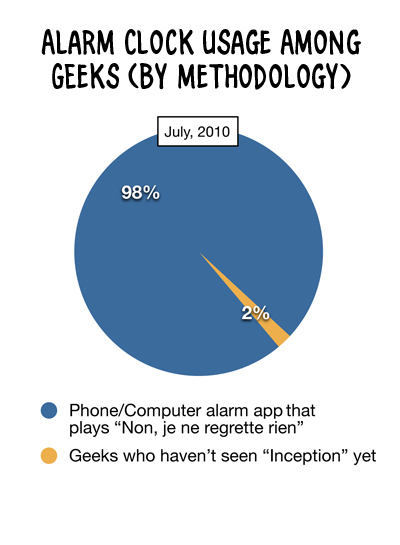 And yes, it’s an awesome way to start the day. I’ve used that song twice and both times, I awoke with a sense of destiny and purpose. I felt as though incredible things were afoot, and that I was a key player in a complicated and important plan.

And then I pulled my MacBook into bed, and started reading comic strips.

This is the best version of the song, on Amazon MP3: Non, Je Ne Regrette Rien

(Hey, cool: I just noticed that the whole album is just five bucks! The Voice Of the Sparrow / The Very Best Of Edith Piaf (Domestic Only)