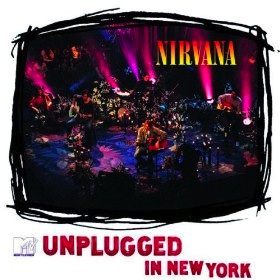 The Man Who Sold The World (Live)

This track is a compromise. Wait, I mean, I’m settling. Or do I mean that I’m knucking under to the crushing disappointment that the world is the way it is, not the way we want it to be?

The point is that I am recommending a David Bowie song called “The Man Who Sold The World.” It is a cover version recorded by Nirvana. Nice boys. I understand that the lead singer was a bit of a hunting enthusiast or something.

Nothing agains them. But it’s not as cool as the David Bowie version. And that version isn’t available on the Amazon MP3 Store or the iTunes Store.

No, that’s just Bowie’s original version of the song. A trippy, dippy, hippie version that smells like a pair of orange velour pants that were worn to a party where a lot of pot was being smoken and not washed in the three days since.

No. I want this version: 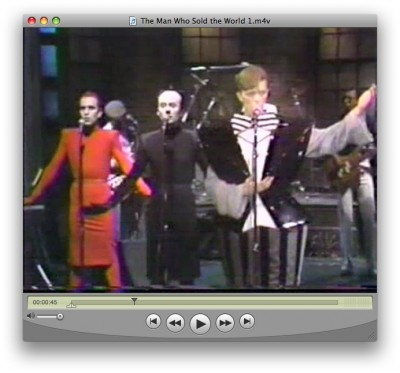 This is a frame from an SNL from 1979, hosted by Martin Sheen. From right to left: Mr. David Bowie, Mr. Klaus Nomi, and Mr. I Must Google For This Information. “Joey Arias.” Fine. But this Nomi fellow was a sensation. He was a classically-trained countertenor. If you don’t know what a countertenor is, think “pre-operative castrato” and you’ve pretty much got it; he had the ability to sing female soprano range with male power and volume. He would have had a terrific career if he hadn’t died just a few years after this appearance.

And he made one hell of a contribution to this song. Bowie commissioned the fiberglass tuxedo for the gig but he also commissioned a new arrangement that was fresh, modern, relevant, and free of patchouli oil. Nomi’s birdlike highs were the perfect counterpoint to Bowie’s baritone.

This QuickTime is an MP4 I burned from a YouTube. No, it isn’t still up there. I’ve looked, but I’m sorry. NBC’s flying monkeys are all over the video sites and any SNL content that hits YouTube is not long for this world.

I dig this version so much that I not only captured it to my hard drive but also GarageBanded it into an MP3. SNL has been releasing complete seasons on DVD at a rate of one per year…so with any luck, they’ll continue to do it chronologically and the 1979 season will come out soon.

When it does: Netflix ? HandBrake ? Quicktime Pro ? iTunes. In a heartbeat.

But again, these Nirvana fellows did a fine job with a version that’s true to the original Bowie recording without making you feel as though you’ve been sitting in a Barcalounger made from recycled soda cans for the past hour.

Buy it from Amazon MP3:

Or you can buy it from iTunes. If you’ve hated everything I’ve ever written, said or done and you’ve been looking for a way to just strike back at me for every offense I’ve ever committed against you, both real and imagined, then go right ahead and buy it from iTunes. “I could have sent somewhere between a nickel and seven cents rocketing into Andy Ihnatko’s ‘I Want A VR-Stabilized Nikon Zoom Lens’ Fund,” you snicker, as you click the appropriate buttons. “But he didn’t deserve it. No. No, he didn’t deserve it. Feel the burn, you Mac-loving bastard!”

Juvenile. Now I’m not even sorry that I’ve been peeing on your newspaper every morning for the past three years.