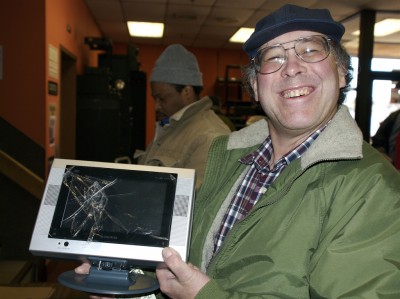 I thought I’d handed out change-of-address cards to just about everybody after my move. But it wasn’t until last week that I realized that I’d missed someone: I haven’t received my annual You-Do-It Electronics Store Presidents’ Day Sale Flyer!

The Sale is a big day on the New England nerd’s calendar. And YDI is a special kind of electronics store. Put it this way: I needed to get my hands on a few 5V relays, LEDs, 555 timer ICs, power transistors, resistors and capacitors, terminal blocks, and a few project boards just a couple of days before I was to leave for Macworld Expo. In most areas of the country, this involves an Internet order and a two week wait. In eastern Massachusetts, it’s not even worth an atom of concern, old bean: you just swing by You-Do-It, right off of Route 128 in Needham.

And the Sale is the stuff of legends. Normally it features three big attractions:

1) The Doorbuster Deals. YDI was doing “We have only 3 of these at this price, so get there three days before and camp out” deals wayyy before the concept signed with a major label and started appearing in Wal•Marts and Best Buys. You-Do-It’s deals were often incredible enough that I’d be there 10 hours before the store opened to make sure I was first in line.

My best deal ever? “50% off your entire purchase, up to…” I want to say $2000, but it might have been $1000. Well, who cares? Half-off of everything in the store! We’re not just talking about a $2.29 spool of red hookup wire, either. See, the top floor of the store is full of name-brand consumer electronics. Suffice to say that I completed a reconnaissance mission on the very day the sale flyer arrived in the mail, and ultimately bagged my limit.

2) The Bag Sale. Head for the parts department and fill a shopping bag full of components: everything you get in the sack is 25% off. Which is why my house generally smells like solder during the second half of February.

And the cherry on top:

3) The Surplus Room. You-Do-It does all kinds of business and they acquire things that they just can’t sell in the store. Stuff that’s broken, stuff that’s out of date, some stuff that’s so odd and out-of-place that (I’m guessing) they had to take this thing as part of the deal when they bought out another store’s inventory.

You never know what you’ll find in there until you start digging. Camcorders missing their lenses; police scanners; DJ equipment; polybags stuffed with wires; police emergency lights; A Mysterious Large Plastic Dome; UPS systems; one of those “spinning colored ball” DJ light thingies, tuners and amps…the list of stuff I’ve seen in that room is long and bizarre.

And you never know if the thing’s going to work or not. I once bought three laserdisc players — this was back when laserdisc was still popular — hoping that maybe one of them would work. I scored two out of three, gave one to a friend, and harvested the motors and components from the third for future robotics projects. I could afford to be generous with the extra one; I’d paid just ten bucks apiece.

I’m not sure if I’ve ever seen anything stickered above $25. They seem to have rolls of $5, $10, and $25 stickers. And though there’s no stated rhyme or reason to how they price these things I’ve come to associate those prices with the statements “this don’t work,” “we have no idea if this works or not,” and “this is actually a useful thing,” respectively.

And there’s also “We can’t possibly charge less than $25 for this.” My last visit was two years ago, and a huge LCD TV the size of a child’s bed was visible through through the window all night long. A zoom photo revealed a $25 price tag. There’s no way the thing could have been functional. C’mon.

But for $25…gee, even as an Object D’art it was worth that price.

Actually, I reckoned it was probably worth far more than that as a prop in a staged YouTube video.

Luckily, before I could contemplate buying it, someone else already did.

But a big part of the fun is the knowledge that you’re hanging out for several hours with the sort of people who are eager to show up at an electronic parts store at 4 AM in the dead of a New England winter. Again, in recent years this basic concept of freezing your butt off to be first in line for a holiday sale has been associated with pre-Christmas gunplay over game consoles. In Needham, it takes the festive tone of a Gathering of the Geek Tribe. I see lots of people at the Sale whom I see all the time at the MIT Flea Market.

I think I’m staying home this year. No doorbuster deals of any kind are listed in the ad, and to get a shot at the good stuff in the Surplus Room you need to be there well before 6 AM. To be first in line, I’ve found that 11 PM is the latest safe choice.

I have a full night’s work ahead of me, y’see. It’s bad enough to be driving to Needham at 4 in the morning on no sleep. Driving home again at 10 in that condition would be medically contraindicated to myself and others, particularly with a cracked, obsolete previous-generation TARDIS carelessly roped to the roof of my car.

But that doesn’t mean you shouldn’t out and have some fun. At 7 AM the store usually springs for a catering truck to roll in and serve free breakfast, if that’s an enticement.

(I’m a freelancer. The prospect of a free hot meal is always an enticement.)

Check out my Flickr photo essay to see pictures and color commentary from my last visit. Think of it as your own reconnaissance. It contains all of the event’s particulars and also shows you that even if you do show up at 11 PM the night before, you’ll still get to spend most of the evening dozing in your nice, warm car without losing your spot in line.